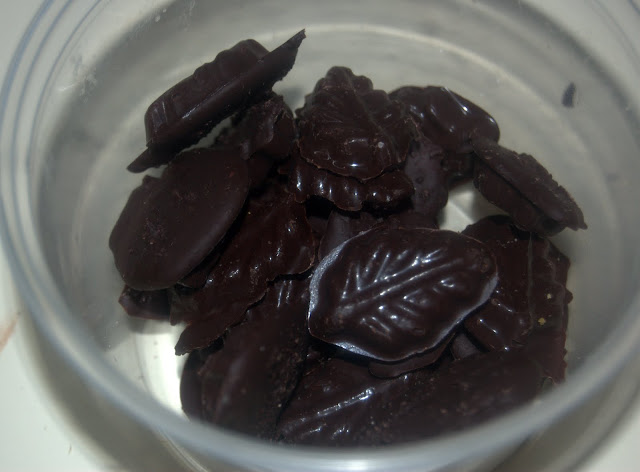 What do you get when you put in the mix
a bit of sugar and a whole lot of nibs?
Make your own chocolate in one little batch.
What do you think of that?

You know, I always thought education was important.  It’s something my parents impressed upon me as a small child and I took very seriously, sometimes too seriously, when I was young.  I was a spelling bee champion.  I was an avid reader and very good at history.  I was good at math.  I was terrible at science except those parts that required math but I still kept up respectable grades.  I went to a private school and studied French for five years.  I went to college and wrote papers on the advent of sound films and its impact on animation.  I took statistics.  I did all that jazz.

How to make chocolate in my food processor.

It’s almost like it was all a sham.  All that time.  All that study.  And for what?  Not once did anyone mention you could make your own untempered chocolate in as little as 15 minutes.  I didn’t even know what a “chocolate nib” was until last year.  Last year! Do you know how many times I’ve seen Willy Wonka and the Chocolate Factory?  How often I have studied it’s every frame, seeking instruction in how I–poor, lowly but definitely a quicker study than that pale, creepy Charlie kid–could some day build a chocolate factory of my own, with a molten chocolate river running through it? But no!  It couldn’t be done, they said.  It takes a lot of effort to make chocolate, they said.  Why don’t you just stick to witty commentary? they said. 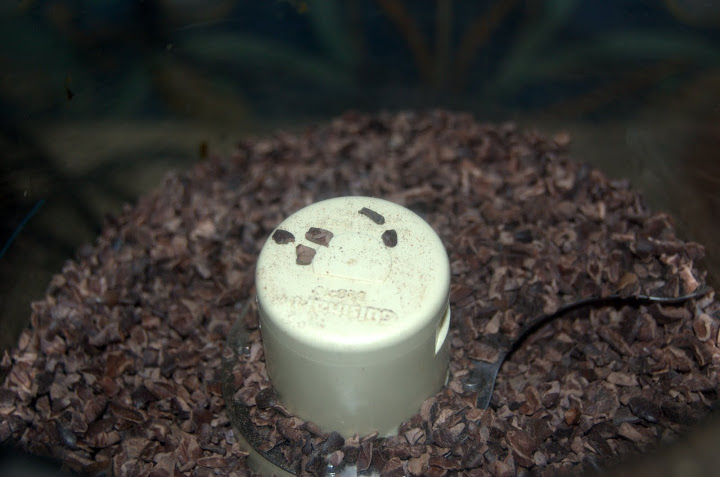 But it’s ok.  My woes will not be your woes.  For I have come to share with you, dear Internet, the light that has dawned in my world.  The shackles of a dark, oppressive existence where you can’t be your own Wonka and hire tiny adults to sing you witty, moralistic songs while engaging in surprisingly sophisticated choreography and intermittently stirring your rippling lake of melted chocolate shall not be your burden to bear.  You, too, can make your own chocolate.

Ok, I mean, this isn’t going to be like Schakolad quality, do-me-a-favor chocolate that you can bribe people with or melt down and use to make your chocolate turtles.  But it’ll be decent eatin’ dark chocolate that you can make in 15 minutes and impress all your friends and sycophants.  And it will be the start of a massive confectionery empire!  Or a fun hobby.  Whichever.

How did I come by this amazing secret, you ask?  Did I discover some ancient Mayan script?  Did aliens beam me up and telepathically give me the knowledge?  Ha right.  Aliens.  That’s crazy.

No, I merely took the long journey….up the stairs to the second floor of Hollanders in Kerrytown with my friend Brian.  We had signed up for something I’d been waiting for since…January.  A class.  Not just a class.  The class.  The cooking class on how to make your own chocolate.  What?!? you say.  Shut yo’ mouth!  But it’s true, my skeptical, imaginary friend.  It’s true. 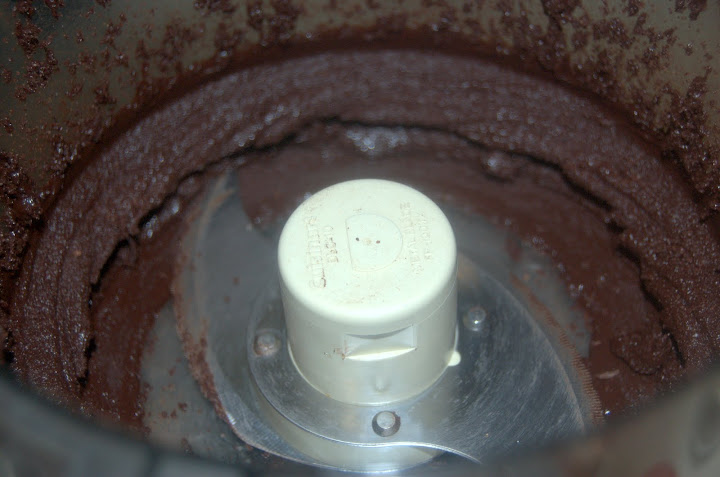 The class, hosted by the delightful as ever Hollanders, was led by the Meza family that owns and runs Mindo Chocolates in Dexter–and Ecuador.  Mindo is apparently one of the few, and possibly only, companies that makes chocolate by doing almost everything themselves.  You probably know that chocolate originates from the cacao tree (which, much like myself, is only able to thrive in a very limited temperature range).  I knew that as well–although I did not know that in addition to the seeds, the cacao pods also contain an edible fruit.  Weird! But anyway, the Mezas explained that once the pods are harvested, the seeds are allowed to ferment, then roasted, then processed for chocolate.  Most chocolate makers just buy the already fermented seeds from the cacao farmers and take it from there, which means that they might get a mix of good and “bad” (rotten, overripe, sprouted, etc) seeds, which affects the taste of the finished product.  Mindo Chocolates buys fair-trade pods from the famers and then does everything—the pod selection, the fermentation, etc–themselves on their property in Ecuador.  After the fermentation and roasting, they ship the nibs to their home in Dexter. 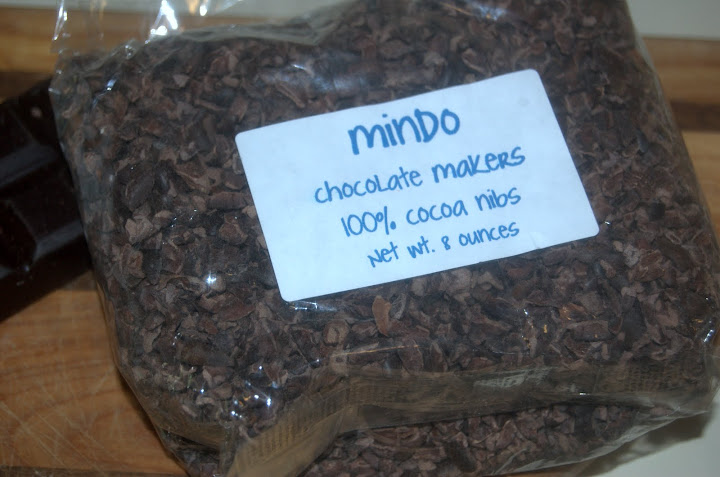 Nibs.  Such an odd yet delicious term.  I was already familiar with chocolate nibs before the class—they’re what I use to make chocolate body scrub, after all.  But I didn’t know much about making chocolate with them.  The Mezas told us all about their chocolate process, letting us sample the nibs, the chocolate bars they made in demonstration, and some of their finished chocolates, all of which were rather delicious, I must say, especially if you love pure, dark chocolate–and I do. I’m rather impressed with how much pride they take in the quality and taste of their chocolate.  Wonka would be so proud. 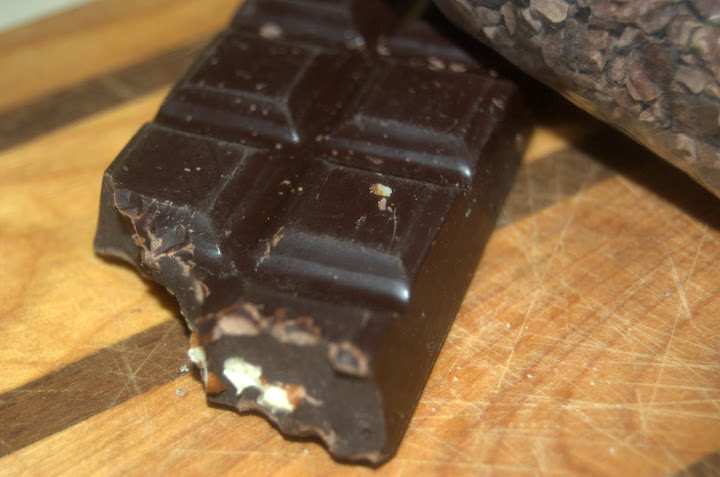 But anyway, back to making the chocolate.  They were nice enough to let us in on what has to be the greatest secret ever kept–that you can create your own cheap chocolate in your food processor.  Now, like I said, this chocolate isn’t tempered–doing so is a huge deal and apparently pretty difficult (I haven’t learned how yet, but I want to)–and won’t be useful for everything, but is still good for eating and baking.  It’s also a bit gritty if you’re used to eating the silky-smooth kind of chocolate we get in the world these days.  This chocolate is more “rustic,” has more texture to it and to be honest, really kind of reminds me of the batter for my homemade oreo wafers.

The Mezas specified a very important warning, though: no liquids.  Make sure your processor is bone-dry and don’t add any liquids to your mix.  That baffled me a bit; how did they get it to liquefy then?  How?! It’s madness! Well, not exactly madness.  The cacao nibs (which, remember, are just roasted seeds), already have about 50% cocoa butter on the inside.  When you put them in the food processor for a long time, the grinding action combined with the heat from the friction melts the butter and sort of melts the nibs.  It’s stupidly simple if you think about it.  Genius, really.  Magic maybe.  I wanted to know if I could do it, so…tonight I made my first attempt. 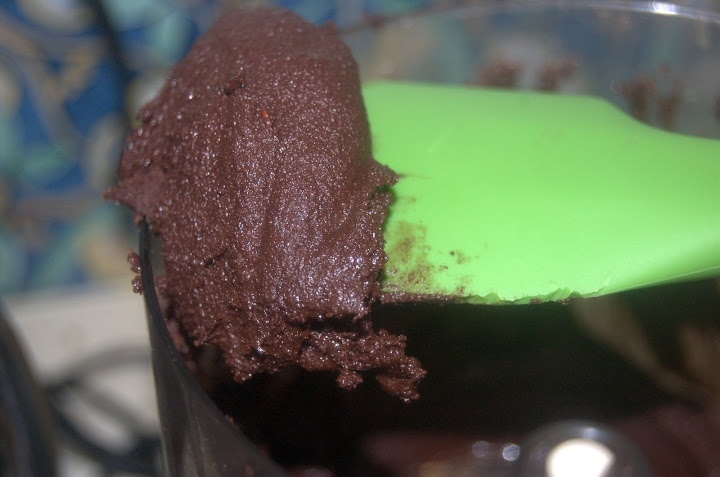 Other attempts will follow, of course.  Hundreds, maybe thousands.  I figure if I make enough chocolate, then the Oompa Loompas will just sort of show up.  Like the chocolate will call out to them, and they will come to it.  I mean, that’s logical, right? Well the first attempt…worked.  I just washed and dried my food processor–thoroughly–and then added in the nibs and first I processed just those by themselves for about 5 minutes before slowly adding in sugar–and I just used regular granulated sugar.  Next time I may try something more flavorful, but that’s what I had.  Near the end, I added in a small sprinkling of cinnamon as well.  If you like vanilla, you can add in vanilla powder, or add in some spicy chili or something if you like that route.  But that was it.  I just turned on the processor and…it did all the work.  At the end, I had a slightly gritty batter.  That’s really what I have to call it–batter.  I then spooned the batter into these little leaf molds that I have (from one of those times where I apparently just went absolutely nuts and thought to myself, “Sure, I’ll order a chocolate mold in the shape of tiny leaves.  I’ll use it all the time!”) and set it in the fridge. 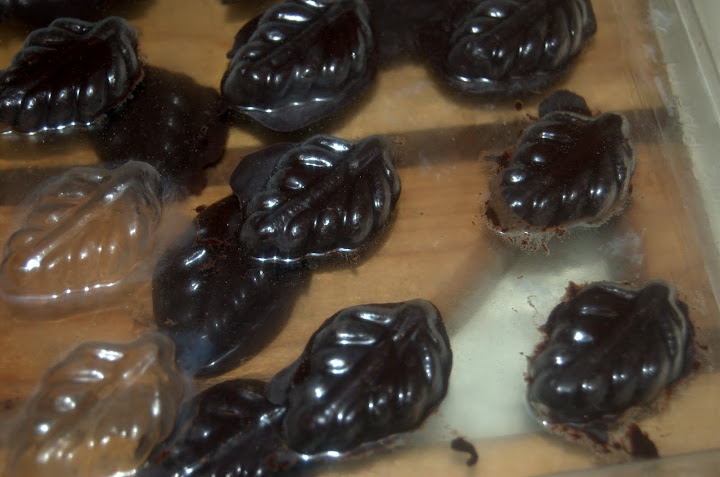 And it’s good!  Not as good as Mindo, of course, but not bad for a first time effort.  Needs improvement.  I’m not sure what next.  But it worked!  And I’m very eager to try this stuff out in a batch of brownies.  Mmm.  Brownies.  But yeah, it was every bit as easy as they said!  My whole life has been changed.  I may have to build a religion around this.  In fact, I’m mentally preparing the story of the Chocogenesis right now. 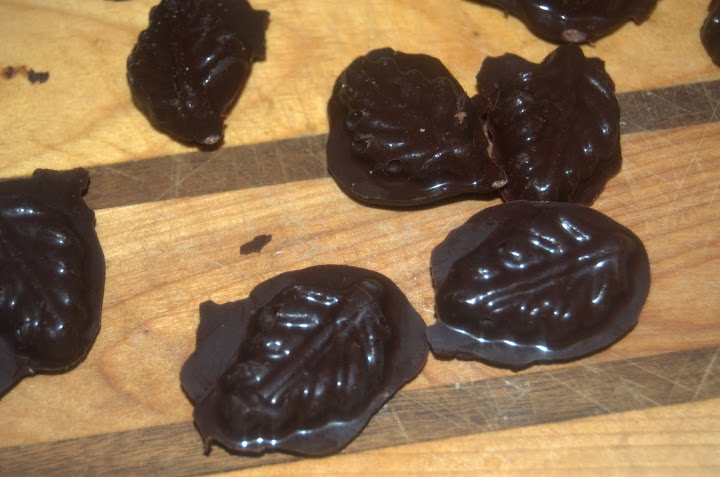 Place nibs and sugar in a very dry, clean food processor.  Process for about 15 minutes or until liquidy.  Spoon into molds, tap lightly to get rid of any airbubbles and place in the fridge to cool and set.  Makes about 6 1.5oz bars.

5 thoughts on “Move Over Wonka”