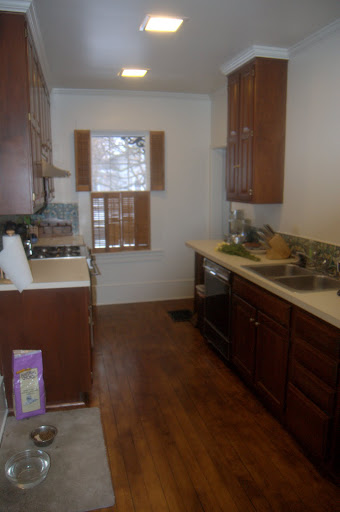 Well, it’s done.  We closed on our first home and moved in.  Seriously, in just two days.  Closed on the house on Friday, moved in on Saturday, kitchen up and running on Sunday.  That’s how I roll.

2.  A clean, neat kitchen is a happy kitchen.  In fact, getting the kitchen neat and clean sort of set the happy tone for unpacking the rest of the house.

3.  Eating out three times a day every day for any length of time sucks.  I mean, really, seriously on a Hoover-esque level sucks.

4.  Hardwood floors are rough on the feet.  Wear slippers.

That’s four things.  I promised three.  Consider that last one an extra tip on me.

While I did love my apartment dearly—fantastic cathedral ceilings, roomy, just a block away from Whole Foods and a great little Chinese restaurant—I am deeply smitten with our new house, I won’t lie.  I also greatly enjoy the opportunity to start out with a fresh, clean blank slate of a kitchen—especially a bigger kitchen where I can really spread out as far as my little gourmet heart desires.

First up were the small appliances–my culinary maid of honor, the Kitchen Aid stand mixer, and my bridesmaids, the Cuisinart food processor, the blender, the slowcooker, the small chopper and the coffee spice grinder.  In my old kitchen, these beauties were stored away here and there in cupboards, their various accoutrements  hidden away in jumbles in various drawers, just because I had very little counter space.  But no longer.  Now, dear electronic friends, we are  in the land of milk and honey and….counter space.  And pantries.

There’s a pantry.  So while the Big 3 (mixer, processor, blender) were set out on the countertop (in an arrangement which, by the way, took a lot of thought on my part in order to best complement my cooking style and laziness my chi), the rest got counter space in the pantry, along with mixing bowls, baking supplies (silicone molds, cupcake liners), extra pans, my cast iron beauties, herbs, spices and the staples of baking (flour, cake flour, sugar, brown sugar, salt, baking soda/powder, oatmeal, chocolates, extracts, whole cinnamon, yadda yadda yadda).  Each in their own place, nice and neat.  Beautiful. 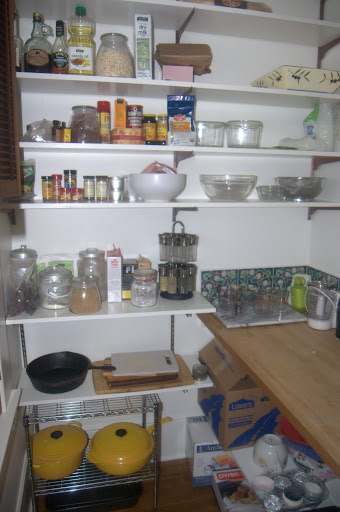 Then I designated “dish,” “glasses,” and “food” cabinets and organized their contents to my liking at the time, noting to myself that just because I put something in a spot didn’t mean it had to stay there.  It’s important to have an out, you know?

And then, of course, I had to settle the issue of serving dishes and cookbooks—which, I’m sure you will be delighted to know, eventually were placed to complement each other on a bookshelf just outside the kitchen.  Artsy, I know.  Artsy and out of the way but still close enough when necessary.  At least, that’s what I’m going to tell myself, so there.

And all the while, I was mentally logging items that I need to get or want to get: a chalkboard, flowers, some shelves on the wall over the counter, a rug, really comfy slippers, a new kitchen radio to replace my old, now dead one. Paint.  What color?  Blue, to match the wall tile?  Yellow to make it bright?  If I dance in my kitchen while making bread, how many people can see me doing it?  Do I need better blinds?

I made breakfast on Sunday.  French toast and bacon.  It was like heaven.  You see, I hadn’t made a meal for a week before hand, because we were packing and putting things into boxes and not buying things so we wouldn’t have to move them over just a few days later.  So every single meal was ordered in, taken out and prepared by someone else.  Which is a fine to-do, if you’re on vacation or if you happen to not like to cook.  But I love to cook, so in that way, the week was a terrible, horrible, no good, very bad week. 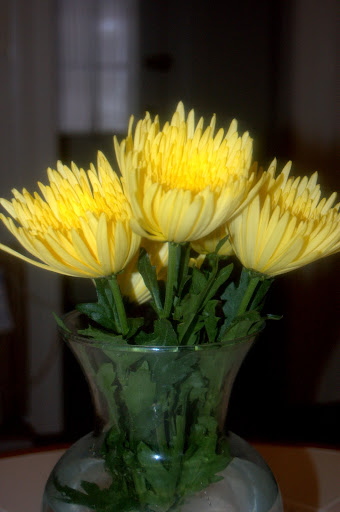 So after we had moved in on Saturday, I went to the store.  We had very little in the way of groceries in the house—I basically had enough to make hot chocolate and brownies, except that the oven didn’t work—oh, and did I mention, our oven doesn’t work?  Luckily it’s being replaced this week but that means I am without baked goods for a while, which is kinda sad, except my boss was lovely enough to bring me cupcakes in exchange for a peek at the house (win!).

Anyway, I went shopping.  But just for a few things—bread, bacon, butter, milk.  That’s pretty much all I bought.  The real grocery shopping would happen later, over a couple of days, but for that moment, I just wanted enough to be able to make breakfast in my own kitchen for the first time in what seemed like ever so long.

So Sunday morning came and eventually, we got out of bed and I went downstairs, pushed aside all the empty boxes and got to work.  Using the cast-iron skillet my grandmother gave me, I fried up some bacon.  And then in that bacon, I fried thick egg-and-cinnamon-battered slices of toast.  And then I drizzled maple syrup over them.  And then I ate them.  With milk.  And all was well.

3 thoughts on “creating a kitchen: adventures in moving”