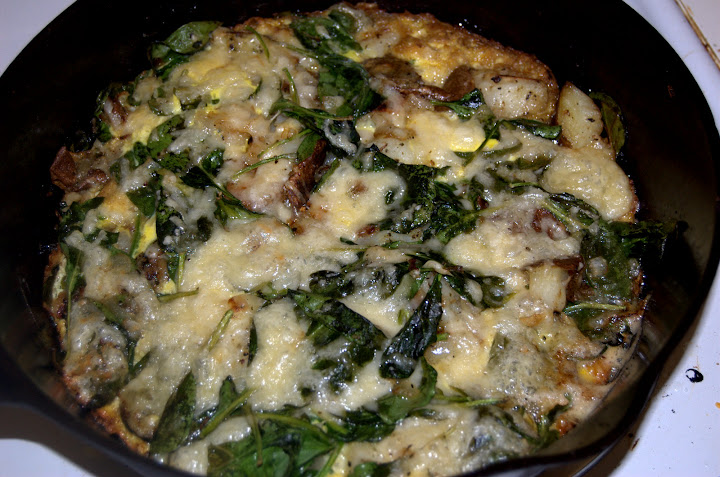 This is it.  The very last Sunday spent in my apartment.  Might as well celebrate it eggcellently (snicker).

Shortly before Christmas, my grandmother gave me a cast-iron skillet.  Gorgeous one, too, with nice high sides.  I have no idea how old it is but judging by the facts that it had been laying in the back of a cupboard, she couldn’t quite remember how she got it it and that the average age of items in her home is 53, I’m going to assume it’s probably about as old as me. But it’s nice high sides, ability to maintain a constant high heat and ease of going between the stove and the oven made it perfect for this morning’s potato and spinach frittata.

I’ve made frittatas before but I just want to reiterate how fantastic they are.  You can put anything into one, they’re fast and easy to make, very filling, easy to expand for as many people as you like and best of all, easily done in one pan.

I had intended there to be ham in this frittata but while shopping for the cheese and spinach, I completely forgot about that.  However, I didn’t even miss the meat, but you can always toss some in if you like or serve something on the side.  Like…well, just about everything else I make, there’s no real recipe here.  Just a method and some options.

So first I cut up about a third of a large onion and diced it, along with two garlic cloves.  Reflecting back, probably one garlic clove is enough; was a bit much for me but Josh adores garlic, so it was fine with him.  Anyway, I sautéed all that in the cast-iron skillet over medium heat in a bit of olive oil and butter.  While that was cooking along, I steamed one medium russet potato in the microwave, wrapped in a paper towel, for about 5 minutes or until fork tender.  Then I let it cool down a bit while I grated two ounces of Swiss cheese in my food processor (obviously, if you have pregrated, you can skip this step).

Then I scooped out the nicely browned onions and garlic and put them into a bowl with two cups of fresh baby spinach, leaving the tasty oil behind in the skillet.  I turned the heat up in the skillet, added a bit more olive oil and then diced up the potato.  Threw that into the skillet and let them get nice and crispy for a few minutes.  While those were cooking, I cracked 6 large eggs into a bowl, added a couple good splashes of milk (probably about a quarter cup) and whisked it together.  Scoop the potatoes out of the pan and add them to the onions and spinach; the heat from them help wilt the spinach a bit.

I added a couple more tablespoons of butter to the skillet again—I’ve been watching a lot of the French Chef lately and my butter intake is going way up—and waited for the butter to melt and the foam to begin subsiding and then I poured in the egg mixture.  Once I could tell that it was beginning to set—the sides will stiffen up and pull away from the pan—and a nice crust was forming, I added the spinach-potato-onion mixture back on top and then sprinkled on the shredded cheese.  Into the oven that went at 350F for about 15 minutes until the egg was fully set and puffy. 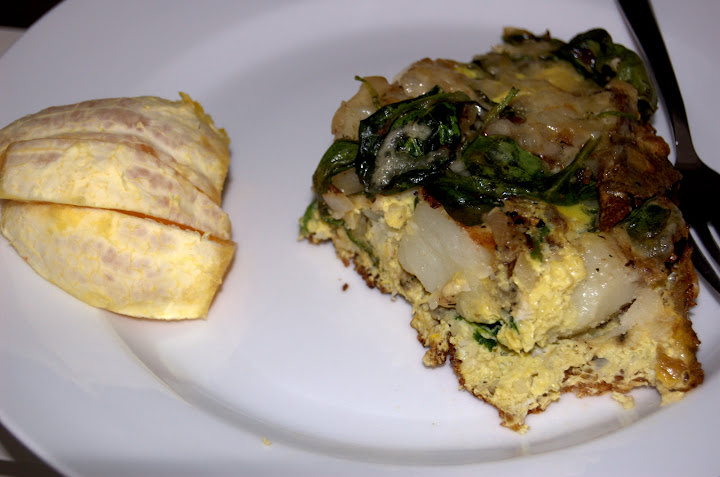 Then I served it up for the two of us along side some fresh navel oranges and orange juice (for Josh) and chocolate soymilk (for me).

I had a dream the other night—which precipitated this frittata frenzy (I like alliteration)—in which we were hosting Easter at our house and doing a massive brunch which include this frittata as well as ham, apple scones, cinnamon rolls, steamed asparagus and a massive fruit plate. Seriously, that was all in my dream.  My goal now is to make that a reality because it sounds freaking delicious.

The frittata options are endless—I mean, there should be eggs and milk or cream, of course, but besides that you’ve got endless vegetable possibilities (roasted red peppers, artichokes, leeks, eggplant and arugula are a few of my faves), meat possibilities (bacon, ham, turkey, chicken, sausage—even leftover shredded beef!) and then there’s cheese…I’m partial to a good Swiss or a sharp cheddar, depending on the meat and veggie choices, but there’s also parmesan, blue cheese, goat cheese, feta…just think of all the combinations. 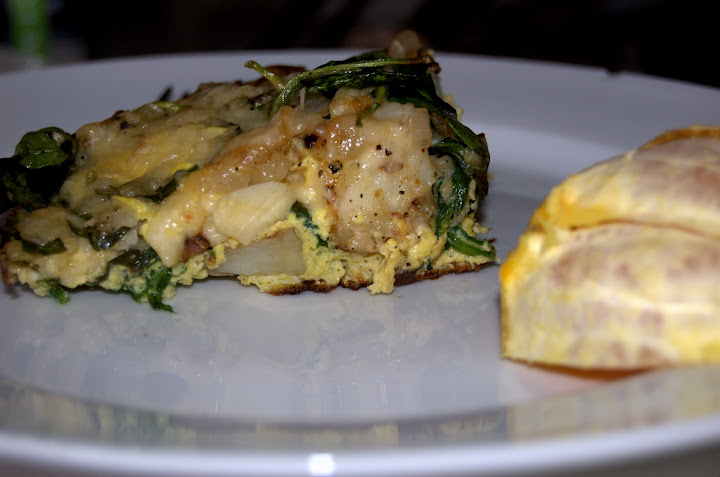 Think of the deliciousness.