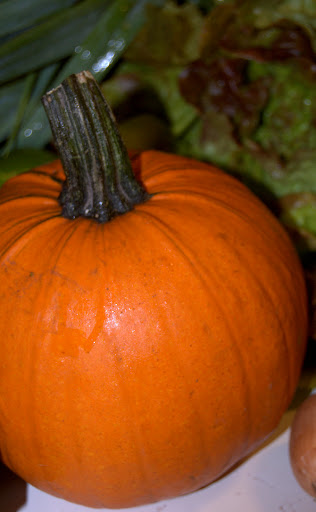 I have a pumpkin.

I have named him Jack.  Jack the Pumpkin King.  This has everything to do with my obsession with the Nightmare Before Christmas and absolutely nothing to do with anything normal.

Jack and I met this afternoon.  I had just hefted the box containing our second-to-last (how sad!) farm share goodies onto the counter, opened it up and began pulling out the lovely produce contained therein.  A couple more leeks, some celery, some potatoes….and then he caught my eye.  I tried to pretend like I didn’t notice at first but really, how could you not?  He was the greatest looking guy in the room–er, box.  That nice round body, that firm smooth skin, that orange glow…

I don’t know what I’m going to do with him yet.  I know you’re thinking, well, he’s a pie pumpkin, make pie, but Josh has it on good authority from his grandmother that boiling pumpkins for pie is a terrible thing and to never ever ever do it.  So…we’ll see. It’ll have to be something suitably delicious.  Jack the Pumpkin King deserves no less. 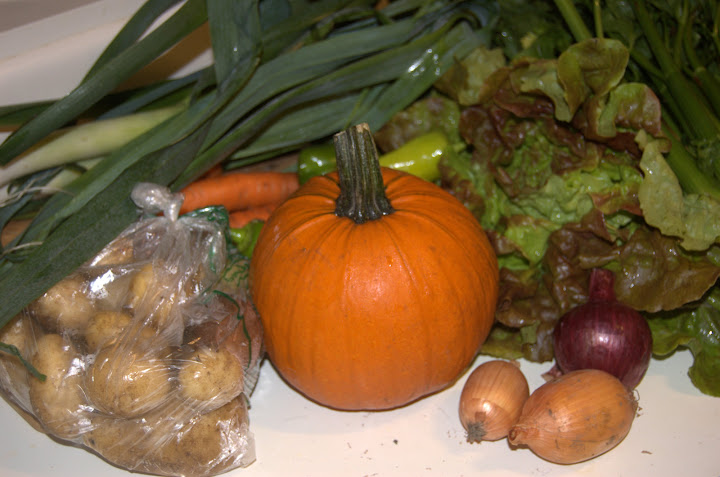 But in honor of Jack’s arrival, I’m sharing my recipe for Pumpkin Cookies, which I got originally from AllRecipes.com.   Enjoy. 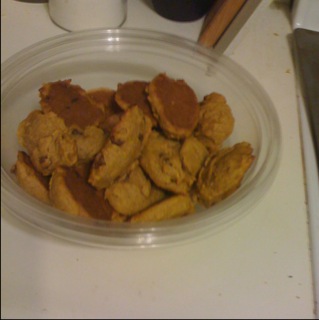 1. Combine pumpkin, sugar, vegetable oil, and egg. In a separate bowl, stir together flour, baking powder, ground cinnamon, and salt. Dissolve the baking soda with the milk and stir in. Add flour mixture to pumpkin mixture and mix well.

3. Drop by spoonful on greased cookie sheet and bake at 350 degrees F (175 degrees C) for approximately 10 minutes or until lightly brown and firm.

4 thoughts on “Farm Share Goodies, October 6: Our Man Jack is King of the Pumpkin Patch”