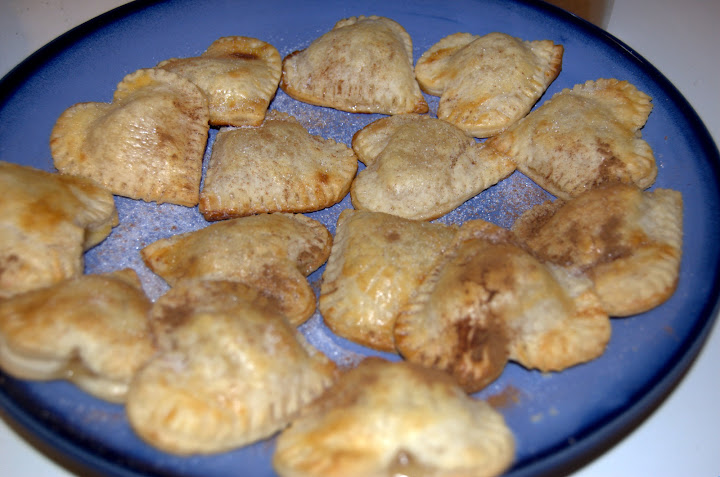 In honor of Josh’s birthday on Monday, I made pies.  Little tiny pies.  Our family is having a birthday lunch for him today and I asked him if he wanted a cake, cupcakes or miniature pies and he went for the miniature pies.  Because let’s face it–everything is cuter when it’s tiny.

Now, I have to give credit for this to bake-tastic blogger Bakerella, whose Easy as Pie post gave me the idea and made me think, “Hey I could do that.”  Normally, the thought “Hey I can do that” combined with actual baking is a dangerous, dangerous thing that just leaves my kitchen covered in flour and me swearing that I will never bake again and stick to what I do best, which is…well, as yet undiscovered, but will most likely be something covered in barbecue sauce.

But anyway, there was just something about the idea of tiny little pies that appealed to me, and I will say, the fact that this particular case came from mostly premade ingredients also appealed to me.  I don’t know what it is, but as a cook, I have no problem mincing my own garlic, grating my own cheese, roasting onions for hours to make a pissaladière or spending three days in the pursuit of the perfect pork rib, but I swear to God I hate having to core, peel chop and sauté down apples for pie.  I also don’t do pie crust.  This is why I pretty much don’t make pie.  I don’t actually really even eat pie.  I’m more of a cookie kind of gal.

So at 9pm on Saturday night, after a full afternoon of seeing 9 at the theater followed by the Homegrown Festival, dinner at Argerio’s and a three-times-longer-than-normal-drive-home-in-football-traffic, I set out to bake me some pie.

I had purchased two boxes of Pillsbury refrigerated pie crusts, the kind that come rolled up in little pouches.  Starting with the first box, I defrosted them a bit in the microwave, then opened one pouch up, pulled out the crust and rolled it out a bit with some flour on my cutting board. 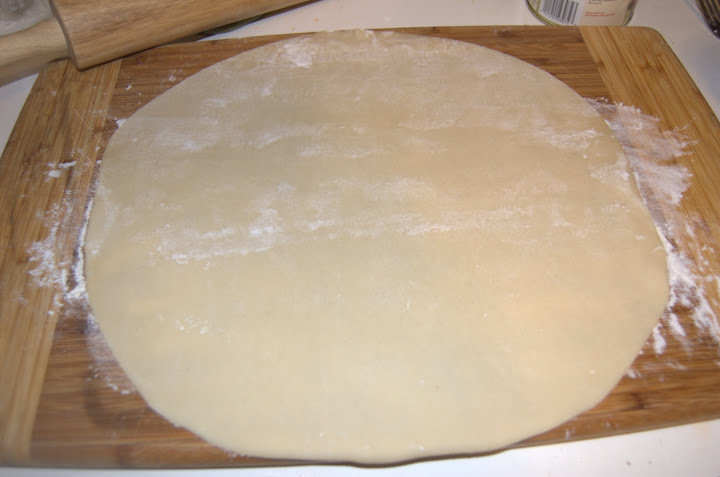 Then I went in search of cookie cutters.  Thanks to my mother-in-law and some coworkers, I have a bevy of baking basics in my closet–pastry brushes, cookie cutters, various silicone pans in various holiday-themed shapes.  I wanted these to be pretty simple though, so I just used a basic heart shape and a basic star shape.  Later, I determined I wasn’t a huge fan of the star and so began using just the rim of a glass to make circles. 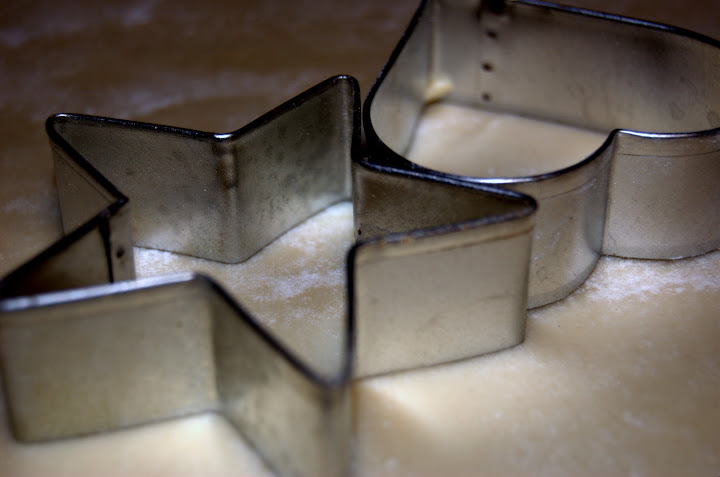 I started with the apple pies.  They were heart shaped. 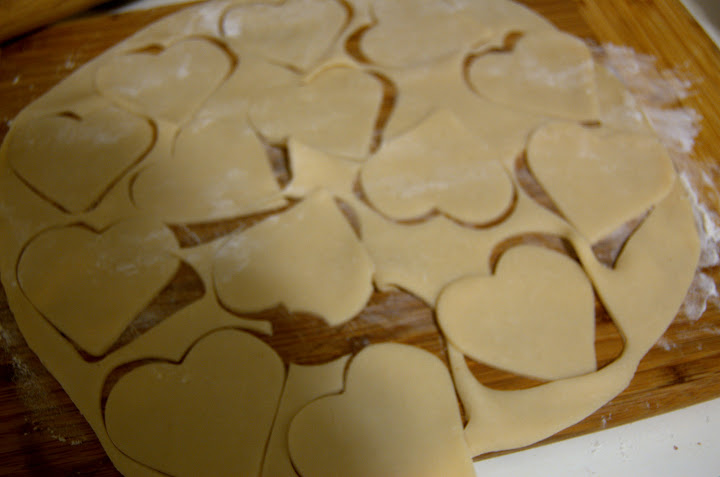 First I cut as many heart shapes out of the dough as possible.  The remaining dough I set to the side.  You can roll it out and make more. 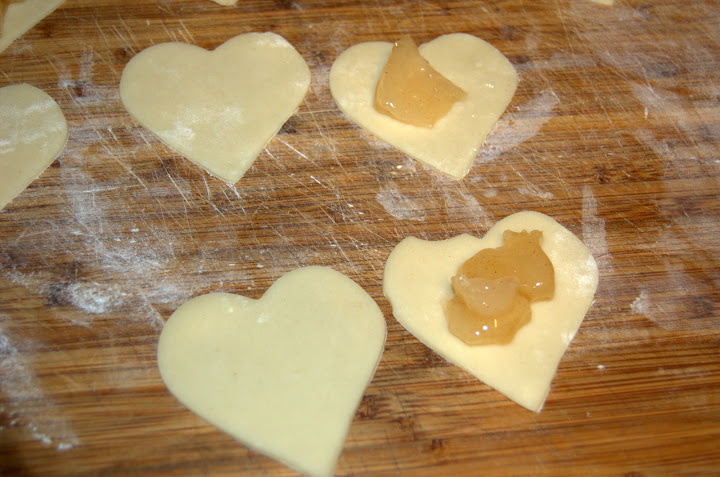 Then I put a small bit of apple pie filling in the center of half of the heart shapes. 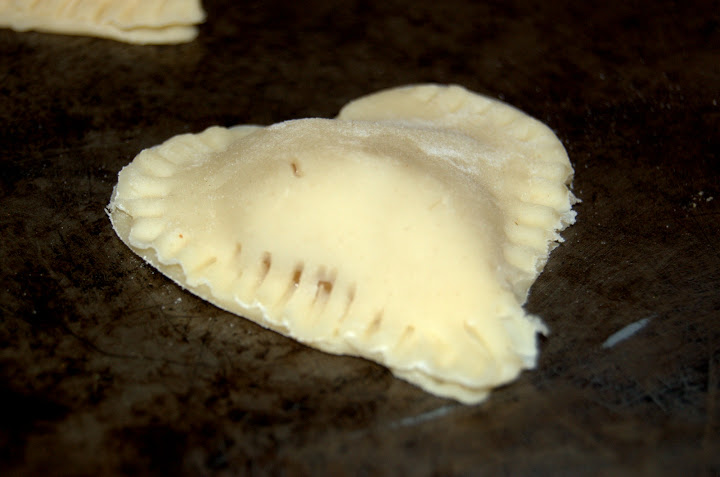 Pressed another heart shape on top of the pie filling and pressed the edges down with a fork.  Repeated for all the rest of the pie cutouts.  Brushed with an egg wash (just one egg white lasted me the entire batch), sprinkled with sugar and bake in the oven at 375F for about 10 minutes. 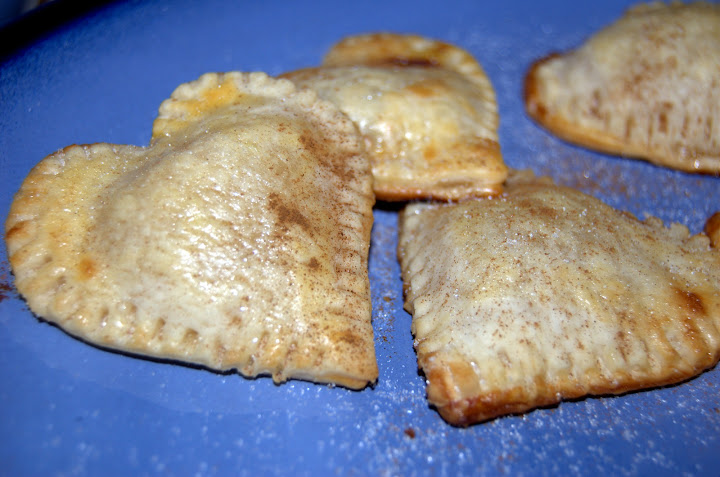 While warm, I sprinkled a bit more sugar and some cinnamon on top.
I did this for both rolls of pie crust in the first package.

Then I got out the second package.  These would be the cherry pies.  I made stars first, and then decided they were too messy and switched to half-moon shapes. 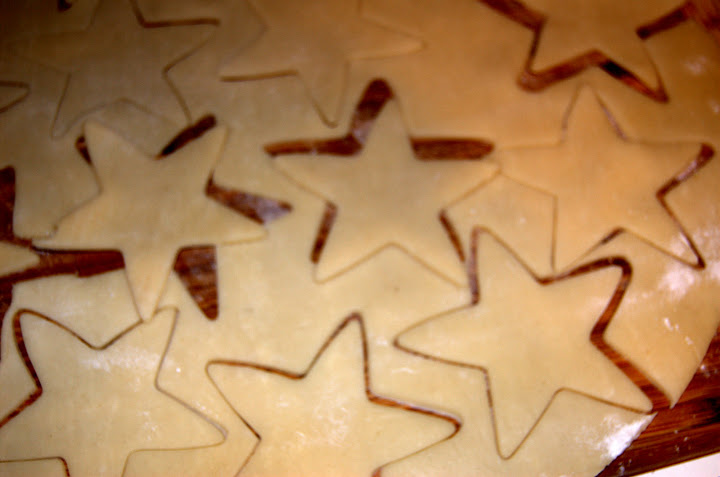 And otherwise, the process was the same as before. 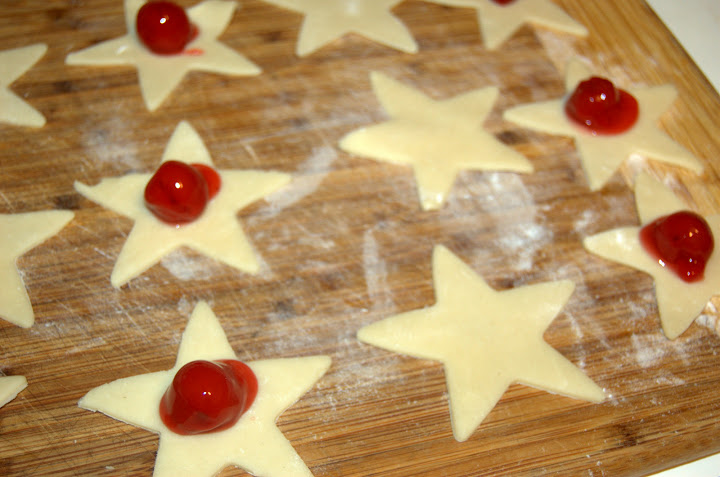 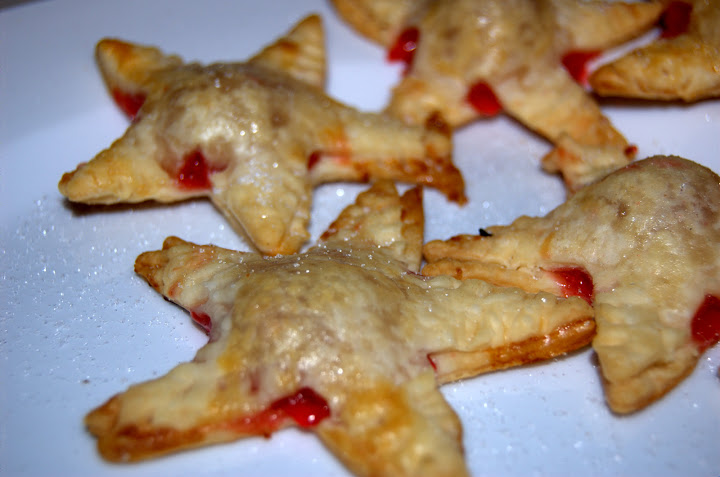 As well as for the half moon shapes.  I started with round circle cutouts (made by using a regular drinking glass), placed a couple cherries in the middle and folded the circles over. 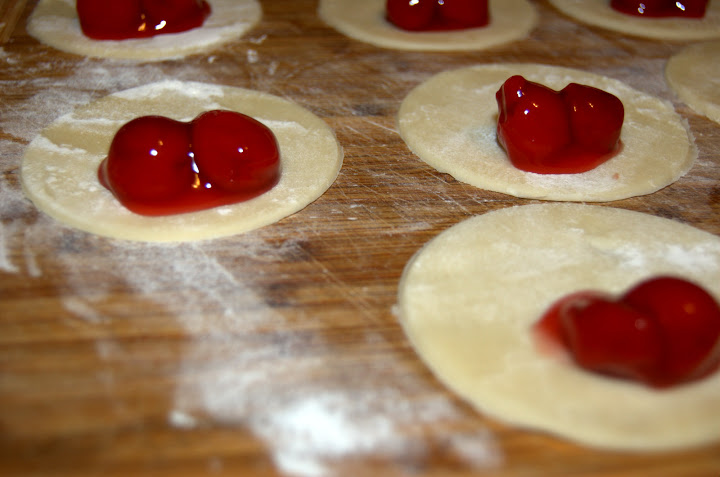 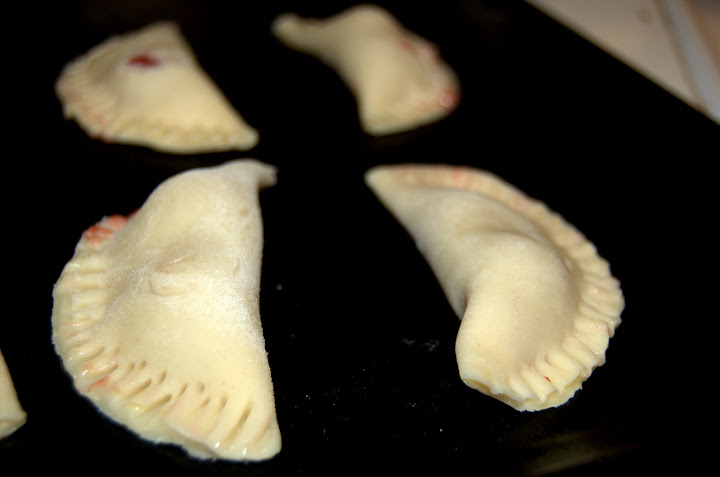 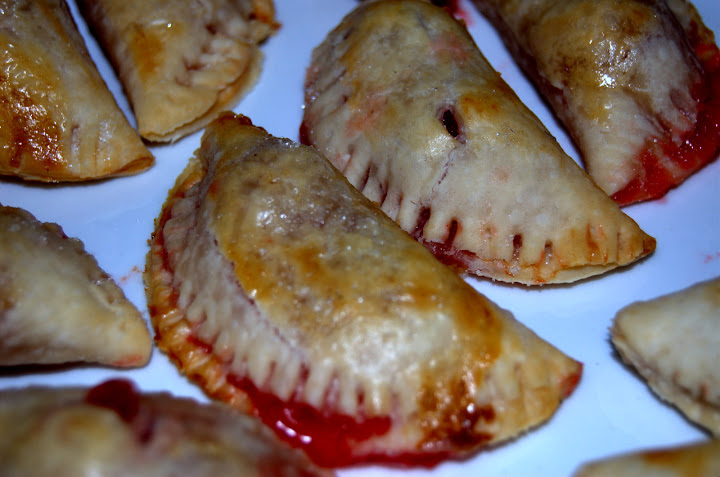 Then for the heck of it, I tried making just two little regular pie shapes.  They worked out the easiest, and you could get the most filling in. 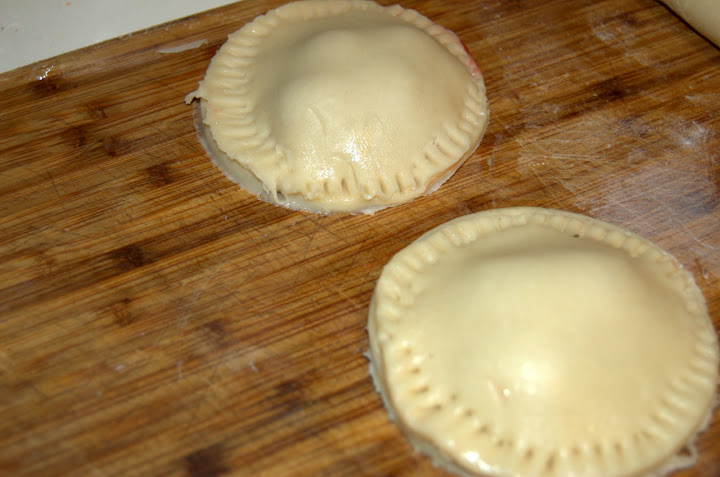 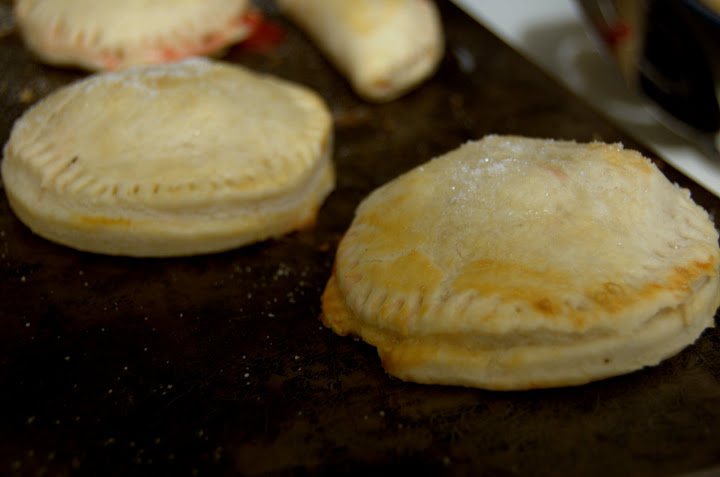 At the end, I dusted the cherry ones with powdered sugar. 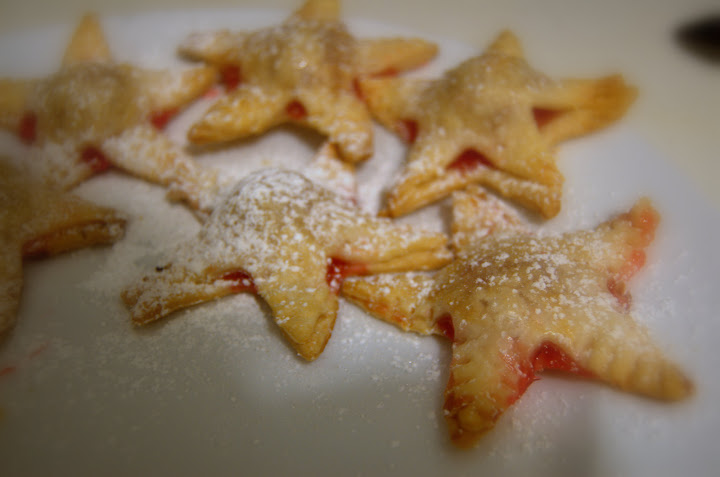 Josh loved them.  He was just absolutely tickled by the entire idea.  And I have to say, the entire process only took me about an hour.  I did them in 4 batches.  It was also somewhat relaxing, since my hands were busy but the work was menial enough that I could chat with Josh and not worry about missing something.  I will definitely try these again.  They’re a nice, cute little change to the regular desserts you might take to parties or just little snacks you can keep at home.