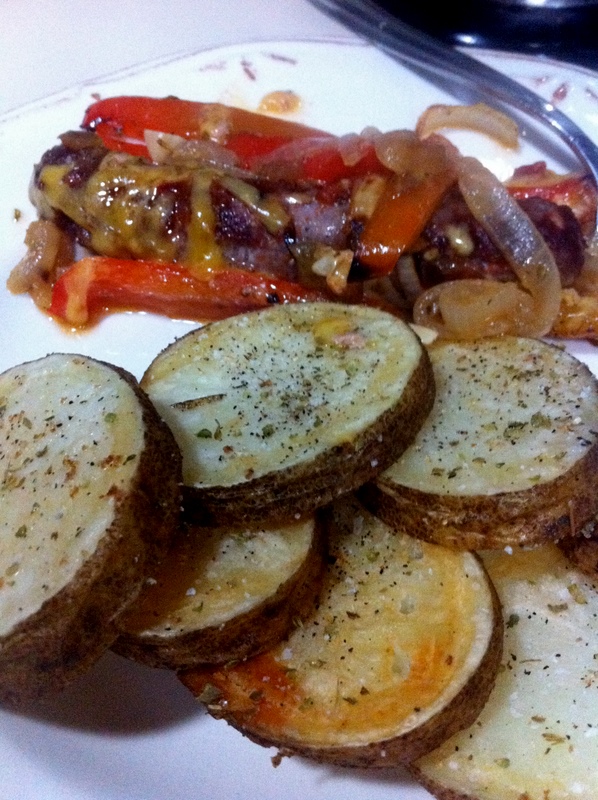 One of the things I’ve wanted to do for a while was learn how to make and fry thing in beef tallow.  I know it might seem like an odd aspiration for a girl, but those of you who know me are probably nodding and going, “Yeah, that sounds about right.”  It’s said, though, that the best fried potatoes are fried in beef fat  and even McDonalds used to cook their French fries in tallow.  Remember those days?  When McDonalds had the best fries in the entire damn corporate restaurant world?  Well now you know why.  Beef fat.  Beef fat sits up there on a pedestal with pork fat and butter as the holy trinity of lipids, in my opinion, veritable liquid golds when melted, with the unparalleled ability to turn food from good to face-down-in-the-plate-awesome.

And as someone who also loves potatoes–I do love potatoes, they are the perfect vegetable, gastronomically–of course I’ve had a lifelong dream to dip slices of soft baking potatoes into clear, sizzling hot beef tallow, remove said starchy delight, coat it in salt, pepper and mountains of cheese and eat it–I mean, who doesn’t have that dream?  Maybe vegans.

But either way, I can proudly say to you that indeed, I have conquered this beefy potato mountain.  I have stood on its peak and raised my foodie flag to the sky and proclaimed, “It is done.”  And it was good.

What’s that you ask?  What’s the big deal about beef fat?  Let me tell you.  Beef tallow is rendered fat, generally from suet which is often found around the loins and some organs of the cow.  Suet melts at over 113F, a fairly high melting point, which makes it excellent for frying.  However, suit (being raw fat) will go rancid if not refrigerated properly.  The beef tallow you make from rendering down suet, though, does not need to be refrigerated as long as it’s kept in an airtight container.  While tallow is often used for soap or cheap candles (you can easily see why it’s used for candles–if you dip your finger into it while it’s cooling down, it will start to form a thin, persistent cover on your digit just like regular candle wax), it’s most deliciously used for frying things.  I’ve started with potatoes, but next will be other things—eggs, chicken, artichokes, ravioli, beer….you get the idea. 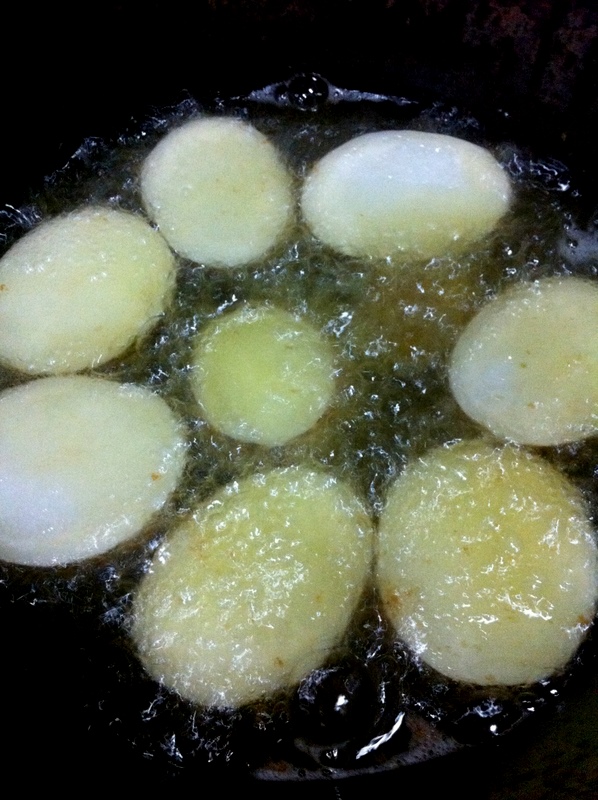 I thought at first, when looking for advice on how to make tallow, that it might be a horrendously long process and I would regret it dearly, but actually it wasn’t too bad.  Hiday Farms was nice enough to sell me some of their leftover suet at the Lunasa market one day a few weeks ago, just a couple pounds so I could try it out.  And the internet provided me a bevy of blog posts about other likeminded individuals who also enjoy essence of cow, as it were, and made their own tallow.  I was pretty excited when I realized I didn’t have to stir a pot for hours on end, or use up my gas oven for hours on end (although you could), but that I could let the suet render down slowly in my crockpot.  How delightful is that?

Basically what I did was this: thawed the suet ever so slightly (it was frozen when I bought it), just enough so that I could chop it into smaller pieces.  Then, bit by bit, I fed into the shredder in my food processor, keeping the un-shredded bits cold while I worked.  The idea behind this was to create tiny suet pieces that would overall have more surface area and hopefully melt down faster and easier.  However, I will probably never do it again.  I saw a lot of discussion back and forth as to whether the step was really necessary or not, and I’m going with not–plus it was a bit of a pain.  And messy.  And as the suet inevitably warmed up thanks to the quick-spinning nature of the processor, it gummed up the blades and was just sort of a hassle. 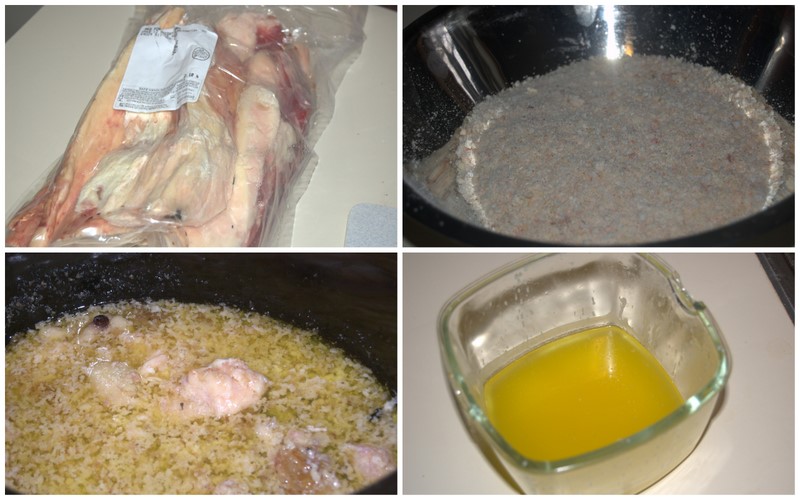 But no matter.  Eventually I got it all done into nice little shreds.  Then it went into the crockpot, on low.  Now, one variable that will always exist is how long the suet actually takes to render down.  I saw estimates for about one and a half to two hours a pound but most seemed to say it depends on the method, the suet, the weather, some butterfly in India flapping its wings, whatever.  Basically, you let it cook until all, or 98% of, the solids have melted down and the tallow is nice and clear.  For me, for a couple of pounds, it took just under 4 hours.  Then strain the liquid, so you don’t get any of those icky little bits in there, and let cool.  Congratulations, you’ve made beef tallow.  I covered mine and put it in the fridge.  I know, you don’t have to.  But I forgot and just did it anyway. 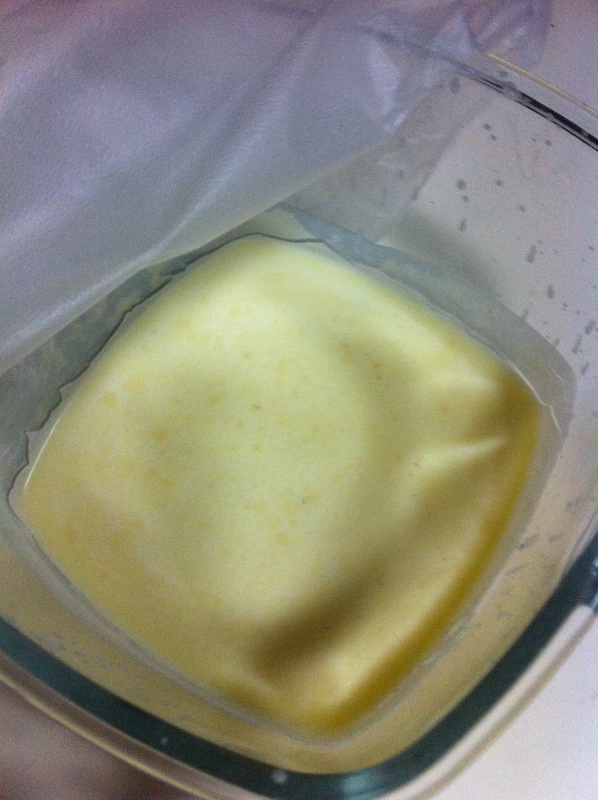 Fast forward a couple of weeks and I finally get around to having Josh buy some potatoes so I can try out the tallow.  I sliced two large baking potatoes into rounds, put them into a pot, covered them with water and simmered them at medium heat for 20 minutes, to get them soft.  I get out my grandma’s good cast iron skillet, slide the solid disc of tallow into it (it was in the fridge, after all) and turn the heat on medium.   I drained the potatoes and patted them dry.  By the time I’d done that, the tallow was completely liquid, clear and beautiful.  I let it get sizzling hot and carefully dropped in the slices, one potato at a time, not overcrowding.  Five minutes on each side, one flip, and then they were drained on paper towels and sprinkled with a mix of salt, pepper and Turkish oregano.  And then, of course, I had to eat one right then and there, still hot and steamy from the pan… 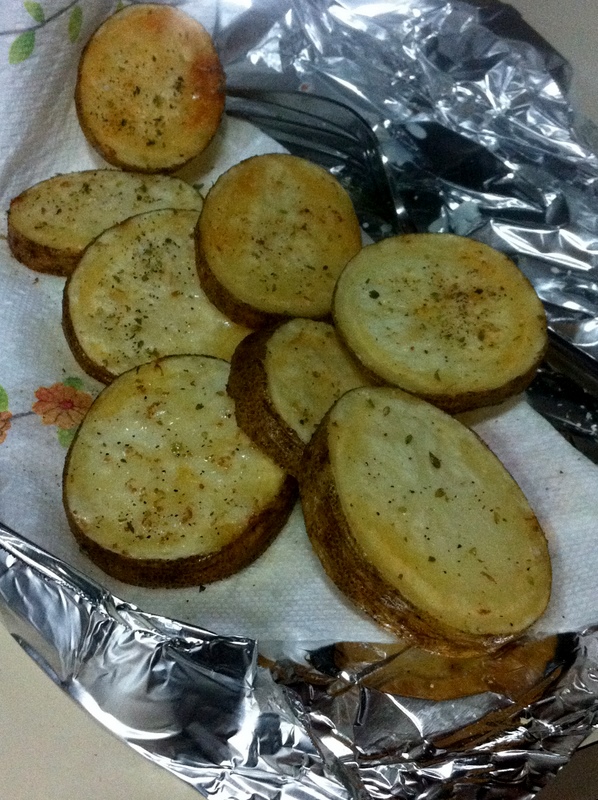 …and it was delicious.  Crispy, soft on the inside, nicely salted.  The tallow doesn’t make them taste like beef.  It just makes them taste better.  No burning, no darkening, just little rounds of potatoes surrounded by delicious flavoring liquid.

4 thoughts on “Potatoes as nature intended: fried in beef fat”