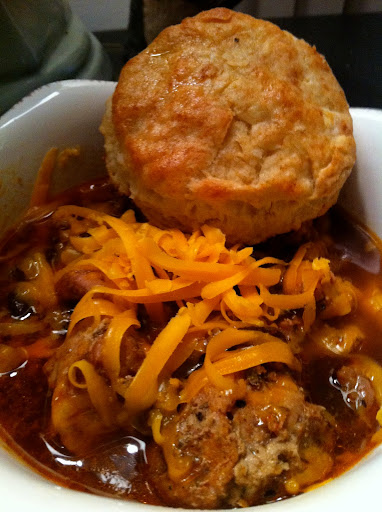 It was ungodly cold in Michigan this weekend.  A high of 14 yesterday.  Fourteen. No, I didn’t really mean to type 41.  The 1 and the 4 were in the correct locations.  14 degrees.  Fahrenheit.  I don’t know about you, but in my opinion, 14 is not a temperature.  It’s an awkward time in adolescence, yes, but it is not a temperature.  It is against everything that is right and holy in my world.

Luckily, to combat this, my office had a chili potluck on Friday, complete with 4 delicious chili concoctions to take the freezing edge off, as well as chips, cheese, cornbread, biscuits–all the necessary accompaniments–cookies and cupcakes.  It was delighful.  But all too soon it ended and I found myself on my own Saturday morning with the cold wind trying to slide into the creaky doorways of my house.  My house is a delight.  I enjoy it immensely.  After all, we did strive to pick a house that we adored, because I intend to live there until I die and then I’m going to haunt it (although admittedly, indeed, I do plan on retiring someplace warm and sunny, but I still plan on keeping and haunting this house).  But some days, the grand old house is a little less grand.  Like days where it’s 14 degrees outside.  My house is three solid layers of brick wall (so if that big bad wolf ever comes around, I’m golden)…and no insulation.  And all wood floors.  And single pain, 150 year old windows.  It just soaks up the cold like a sponge.  With Josh off playing some RPG game with friends, and the dogs out of the house playing at day care (you laugh but it’s the greatest thing in the world if you have a puppy, especially one that weights 95 pounds and is the size of a deer, like our mastiff), I knew that if I followed my instincts and just melted myself into the couch, cloaked in a blanket like a ghost and watched endless hours of the Cooking channel, eventually….wait, why didn’t I do that?  That sounds awesome.

No, instead, I decided to battle the cold by keeping busy…cleaning the house.  How stupid was that?  I mean, it worked, but I kind of like the “couch” option up there much better.  Oh well.  I least I did something right–I made a big batch of this chili and let it simmer while I (fruitlessly, I might add) tackled the sagebrush-like dust balls that roamed the open desert of our floors.

This chili is one of those “take what you have, put it in the pot” kind of deals.  I love those.  Not only do you use up extra ingredients, but it’s easy, requires no real thinking or planning, and you end up with a lot of flavors and textures usually.  Now I love chili.  I’ve been making chili since I was 13—no joke, I recently found my original chili recipe from 7th grade: ground beef, crushed tomatoes, canned beans, onion, chili powder, cumin, salt, pepper, oregano.  That was it.  No instructions listed, no measurements.  13 year old me…not that different from current me. 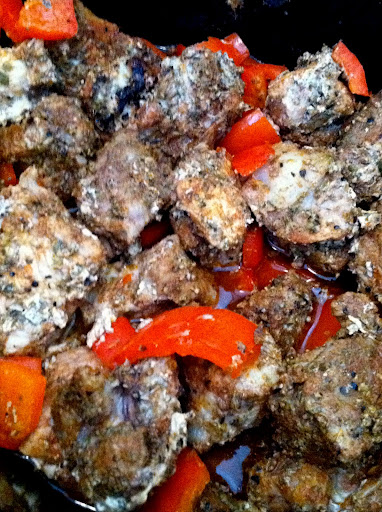 But anyway, I’ve progressed since those days.  I no longer use ground beef in my chili.  I prefer chunks of beef stew meat instead, as I like to cook my chili for hours at a time and beef stew meat will get nicely soft in that scenario without completely melting into the background and losing its shape and texture like ground beef will after 8 or 9 hours.  I do, however, still use crushed tomatoes for my chili base.  I just find tomato-based chili to be filling and comforting.  I also tend to use three types of beans–black, pinto and red beans.  But this chili, this chili was slightly different from the ones I normally make.  It’s broth based…due largely to my own laziness and not wanting to go downstairs into the presumably cold basement to retrieve Josh’s canned tomatoes.  It lacks onions, because I didn’t have any.  It has just one type of beans, black beans, cause that’s what I had.  It has large chunks of red bell peppers, cause I had plenty.  And instead of cubed beef stew meat, it has cubed pork loin, andouille sausage and hot Italian sausage. 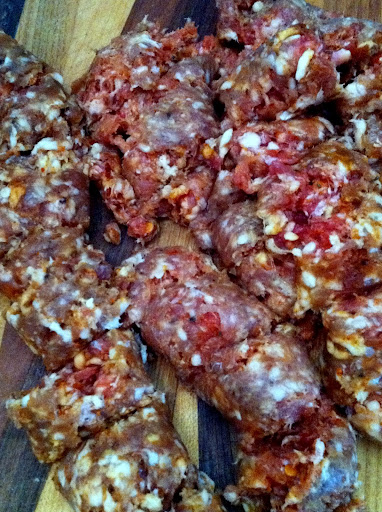 And it was pretty good.  It smelled fantastic, and that’s a good sign, when you walk into the kitchen and your first response is to go, “Mmmmm.  Yuuummmmmmyyyyyy.”  It was thick and chunky.  It had a lot of texture, from the peppers and the cubes of meat and the ground sausage.  Delightful.  I topped it with some cheese, a homemade buttermilk biscuit and sat on the couch (under a blanket) and watch food shows.  Take that, winter. 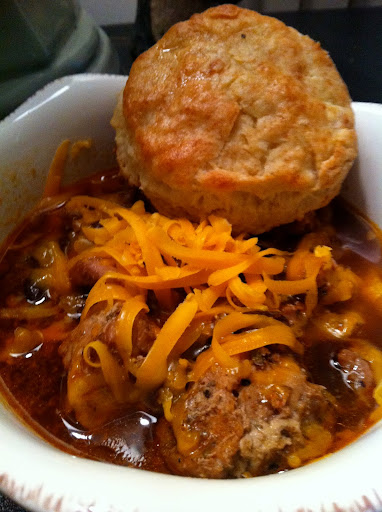 Place pork loin in crockpot.  Sprinkle with spice mix and then drizzle with olive oil.  Stir pork around in the spices and oil, coating as much as possible.  Add in peppers, mixing thoroughly with the pork.  Place top on the slowcooker, turn on and cook on high for 2 hours.

At the end of the 2 hours, add in both sausages, chopped into bits, black beans and chicken stock.  Stir until everything is well incorporated.  Replace top, cook for another 2 hours on high.  Top as you like and eat.