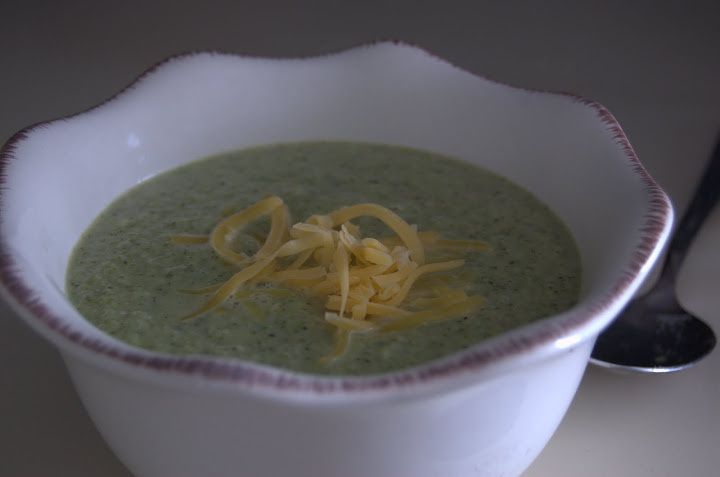 One of the questions I get asked on a regular basis is—how do you do it?  And no, they’re not asking me how I remain so effervescently awesome–it’s clearly obvious that’s a trade secret.  No, they’re asking me, “How do you put a meal together?  And not a meal from a recipe you’ve searched for and pored over and planned out and executed with ninja-like precision (speaking of, there are at least 5 ninjas in this article.  But you can’t see them).  No, a meal from just whatever you have on hand.  How do you do that?”

It occurs to me that somewhere along the line, cooking became some sort of mysterious alchemy to a disturbingly large amount of people.  Food goes in one way, and deliciousness—or for some, vast amounts of thick black smoke–come out the other.  What happens in between is a mystery.  But it really doesn’t have to be that way.  You don’t have to go down the long, dark path to Frozen Foodland most nights, or make the same safe spaghetti and meatball dish every single night.  Not that I’m hating on meatballs–I love meatballs, some of my best friends are meatballs–or anything like that.  But of all the things in the world to fear, making dinner shouldn’t be one of them.  You don’t always have to have a plan.  It works to just toss in what you have.

And what you have doesn’t need to be a lot.  Some of the best recipes (and the best non-recipe recipes) are made with just a few ingredients.  For instance: cream of broccoli soup.  I was sick over the weekend–darn those college students and their germs–and with the very little energy I had and apparently very high fever, I decided I was going to get out of bed long enough to make myself lunch.  And I really wanted cream of broccoli soup.  I don’t know why.  But there you go.  I’ve never made it before and while I’m sure there are thousands of varieties, but I just wanted to make something really simple.  I sauteed a bit of garlic in butter, added a ton of broccoli florets and some chicken stock (cooking things in chicken stock always makes them better), cooked it a few minutes until the broccoli was bright and relatively tender and then pureed it in the blender with a touch of cream, salt, pepper, a bit of red pepper flakes and…a handful of roasted almonds.  I had almonds, I like almonds, I especially like almonds with broccoli, and I figured they would add a bit of texture, some healthy fat and a nice crunch to the soup…and they did.  And that was that.  Threw a bit of shredded cheddar on the soup and I almost felt human again.  Cheese will do that to you. 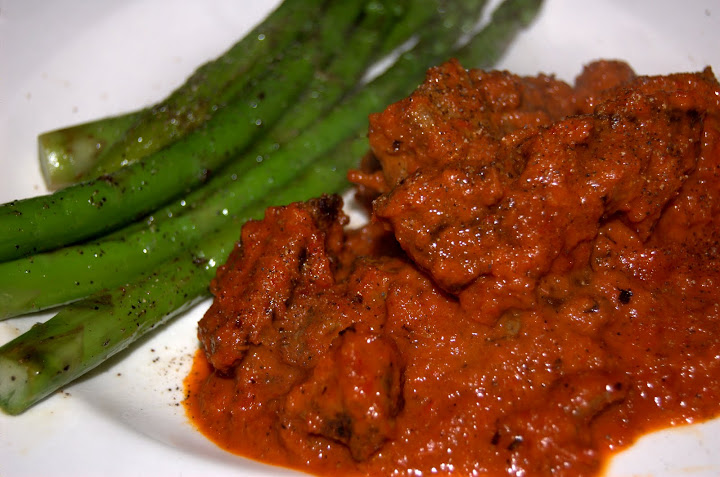 Or try this: get a few whole red bell peppers.  Cut off the tops, drizzle them with olive oil, salt and pepper and roast them at 450F until the skins blacken.  Dump them into ice water, peel the skins off and puree them with a touch of olive oil.  There you have an amazing sauce that will make almost any meal delicious—and with almost no effort.  Got some chicken or cubed beef stew meat in the fridge?  Season it with whatever you got (I like garam masala), toss it in a hot pan and sear it, then pour in the red pepper sauce, a touch of cream or milk and whatever herbs you have on hand.  Pair it with rice or a steamed veggie or eat it off bread or in a house, with a mouse, off a cat, in a hat, whatever you like. 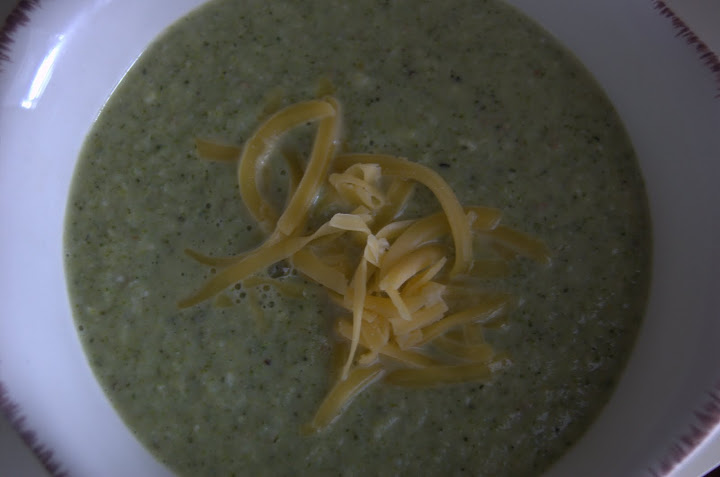 In a large pot, melt 1 tbsp of butter.  Add in the garlic and stir it around in the butter until it’s lightly browned.  Add in broccoli and chicken stock and simmer for 5-7 minutes.  In batches if necessary, pour the broccoli and broth into a blender with salt, pepper, red pepper flakes, almonds and cream and puree together.  Serve.  With Cheese.  And then eat.  With relish.  Not real relish.  Unless you want real relish. 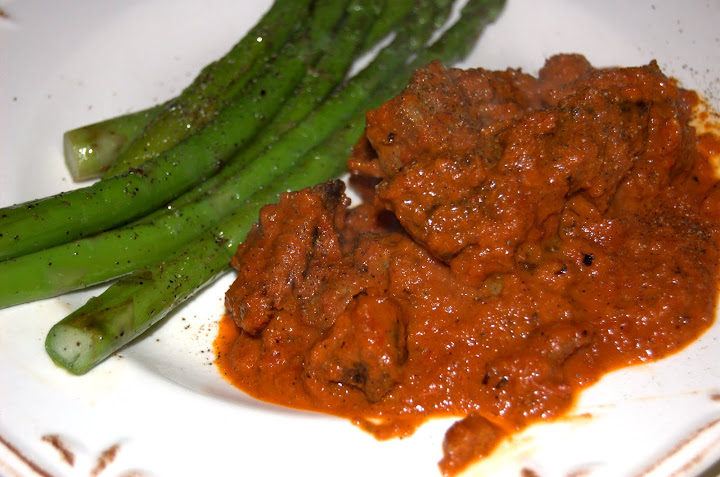 Preheat oven to 450F.  Line a baking sheet with tinfoil.

Cut the tops off the bell peppers and clean out their insides.  Drizzle with olive oil, salt and pepper, and place them on the baking sheet.  Roast them in the oven until the skins have blackened and the peppers are soft, maybe around a half hour depending on your oven.

Place peppers into a bowl of ice water.  This will help cool them down, as well as make the skins easier to peel off.  Peel off skins as best you can.  Place peppers in a blender along with a tablespoon or so of olive oil, the cream and the oregano.  Puree.

Heat a skillet over medium high heat.  Season stew meat with the garam masala (or whatever spice mix you like).  Sear the meat in the skillet, 3-4 minutes on either side.  Turn the heat down and pour the red pepper sauce over the beef.  Simmer until the beef is tender, about 20 minutes or so.