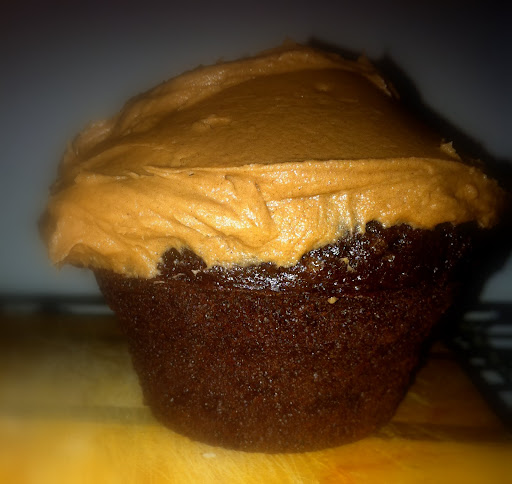 I wasn’t doing a lot of baking for a bit there recently and in the meantime, my Calder delivery kept coming.  By last Friday, I had amassed a small cholesterol-y fortune to the tune of about 4.5 pounds of butter in my pantry.  I thought to myself, I should probably whittle that down before it goes bad.  So I did what any other me in my situation would do: I made cornbread.  And cookies.  And those triple chocolate brownies that I’m convinced could easily be the flavonoid-filled death of some otherwise healthy person.  But it wasn’t enough.  By the end of the weekend, I still had a pound and a half of butter.  At least that’s a reasonable amount for me.  I can always make another batch or four of cornbread.  I mean, it’s really good cornbread. But I also wanted to try something new.  Frosting.

Generally, I don’t like to make frosting.  I’ve tried before, for cakes and cinnamon rolls, and it always comes out “meh.”  Seriously.  It actually shrugs its sugary shoulders with a bored sounding “meh” as I spread it haphazardly across the top of some otherwise adequate baked concoction.  The frosting is unimpressed with my meager talents at creaming various dairy products with sugar.  Well that’s fine, frosting, cause I don’t like you either.  Really, I don’t.  I’ve never cared for frosting.  Generally find it too sugary–I prefer the cake part.  I don’t like filling either for the same reason.  In fact as a kid, when given a Hostess cupcake, I would peel off the frosted design and then proceed to eat the cake around the filling and then throw the filling away.  What can I say?  That’s just how I roll.  Non-frosted.

But other people like frosting, so I feel I should make some attempt at creating it, no matter how ill-shaped and misguided my notion is.  So I figured on Sunday, as long as I’m making brownies, might as well make some frosting for them right?  Right.  After all, I’d recently saved an easy-looking recipe for chocolate buttercream frosting and I was awash in all the ingredients needed to make it.  Might as well give it a go.  So I proceeded to make these brownies from Buns in my Oven, which is my favorite brownie recipe ever, especially as I like to use half dark chocolate chips and half semisweet.  They are very fudgy and pretty deadly already.  They really don’t need frosting.  But I went ahead and made the frosting anyway, figuring I could put it in the fridge and use it to top something else later, which is what I did. 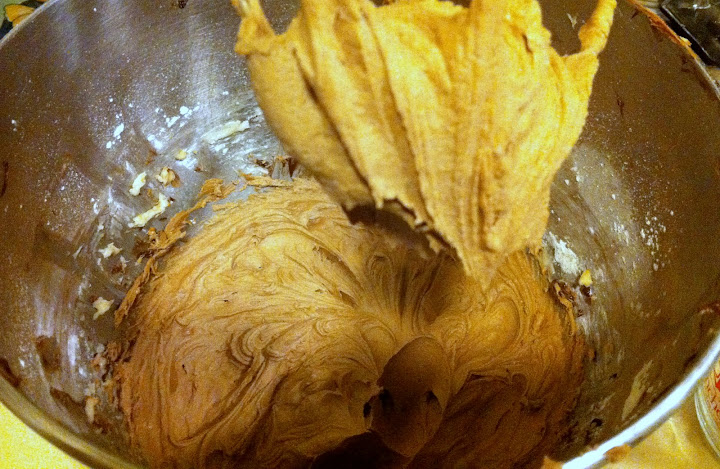 Immediately after making the buttercream, I knew deep down in my soul that this was the frosting recipe for me.  It was easy, had few ingredients, could be easily manipulated and actually tasted good!  And the color and consistency were spot-on.  It was creamy and pliable and the color just screamed, “I’m chocolate!  Eat me!” but in a pleasing way, not a creepy “Did that food just talk to me?” sort of way.  It took mere minutes to make, I didn’t have to fuss with it, and best of all, I didn’t have to use it right away.  I put it in a covered plastic container in the fridge and took it back out again yesterday, where I proceeded to let it come up to about room temperature (because buttercream gets really hard when it sets and even more when it’s cold) before putting it back in the mixer with the whisk attachment.  After just a minute or two of vigorous whipping, it was back to its fluffy, creamy, winsome self.

Instead of spreading it over the deadly-chocolate brownies (which, I have to say, already contained over 2 cups of sugar, 4 eggs, half a pound of butter and over 3 cups of chocolate in various forms and really did not need to be topped with more butter, chocolate and sugar), I made a simple batch of chocolate cupcakes.  It made for a great pairing because the cupcakes were cocoa-y but not overly sweet, dense but not too moist, while the frosting was sweet, buttery and as I’ve said, quite creamy.  It was a match made in a kitchen. 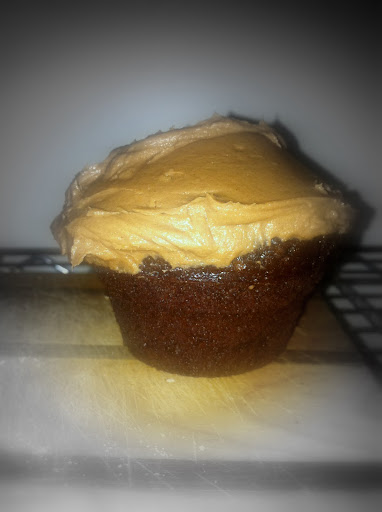 Check out the recipe for the chocolate buttercream from the Brown-Eyed Baker.

Mix boiling water and cocoa powder, whisk til thoroughly combined (it helps if you sift the cocoa before adding it in) and let sit to cool.

In a mixing bowl, cream together sugar and butter until nice and fluffy; add in eggs one at a time, and vanilla.  In a measuring cup, combine flour, baking soda, baking powder and salt.

Add a bit of the flour mixture to the sugar mixture, followed by a bit of the cocoa, and continue on, alternating until everything is mixed in and incorporated.

Ladle the batter into a cupcake pan that has been sprayed with nonstick spray (or unto prepared cake pans) and bake for 30 minutes.  Cool and frost. 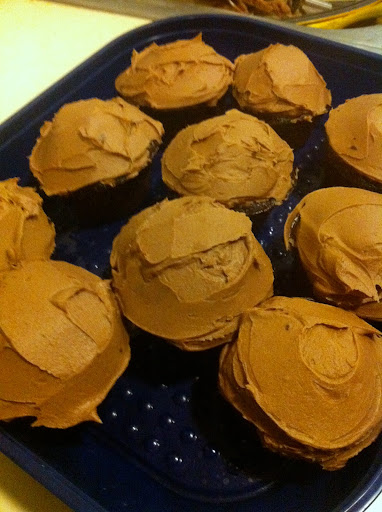 3 thoughts on “This cupcake has a nice body, butter face…”