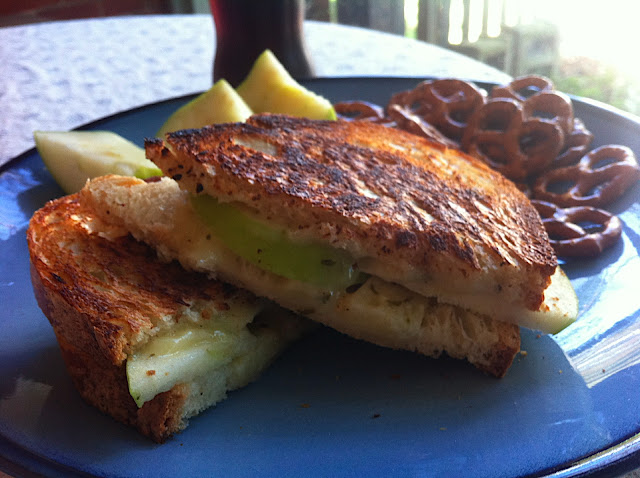 But fall is also the time of year where I start thinking about, craving, making and eating what I consider to be the ruling class of the gastronomical world: comfort foods.  And that’s good.

Comfort food is not just a universal cultural icon, it’s a necessity.  It’s an inevitability, really.  It’s not just about favorites, it’s about associations.  And I have a lot of associations.  For instance, baked mac and cheese is one of my very top comfort foods because it’s a dish we always have at family holidays.  Apparently that’s not very common, but it’s a must for us.  And then there’s barbecue, which is more of a summer comfort food for me but really works all year round (I mean, I don’t turn down barbecue for just about anything).  I used to watch my dad make his neighborhood-famous ribs and homemade sauce every summer as a kid and it stuck with me.  Sugar cookie dough–because my mom used to make sugar cookies at Christmas time and I used to swipe the unbaked dough and eat it while watching my sister play video games.  Chili, because it’s the first comfort dish I learned to make on my own–and the first dish I ever cooked for a friend, in middle school.  And chocolate chip cookies because…well, I’m alive.  That’s reason enough.

And these are all things I find myself wanting in the fall and winter, as it gets colder and darker and a slew of holidays begins to creep forward (or sprint—Costco actually has Christmas stuff on sale.  In September).  So the time has come, the Lauren said, to talk of tasty things, of stews and soups and casseroles, of comfort foods and drinks.

I started with a simple favorite, a classic favorite.  A favorite that’s basically two slices of nostalgia with a thick slice of childhood in the middle, buttered and griddled until gooey and hot.  Yep, that’s right: grilled cheese sandwiches.

My favorite basic grilled cheese is exactly the way I made it as a kid: two slices of white bread, buttered, one slice of Kraft cheese and a moderately hot skillet.  Don’t move the sandwich around, only flip it once.  Eventually you begin to develop a sixth sense about when each side is done.  I can’t tell you how I know, I just do.  Maybe it’s the smell, maybe it’s the sound, maybe it’s the result of thousands of grilled sandwiches having been made over the course of a lifetime, I dunno.  And don’t think I don’t know that some of you shuddered when I said “white bread” and/or “Kraft cheese.”  I was a kid, we didn’t have tons of money and that’s what we ate.  And it was delicious, because it has been chemically formatted to be so.  And Kraft is an excellent melting che–well, it’s not actually cheese.  But whatever it is, it melts fabulously.

These days, of course, though, I don’t buy Kraft.  I can’t.  I can’t buy something that looks like cheese but can’t legally be called that.  So I buy cheddar instead, usually sharp, and slice it myself.  We often still use white bread, though, since Josh likes it and because it really does grill better than whole wheat bread, usually.  Multigrain and seeded breads get too…crunchy almost.  You need a soft bread.  Challah works well.  You want to well-butter one side of each slice of bread and you want the pan to be over medium high heat.  Not so hot that the bread scorches, but that it browns quickly and nicely.  And most importantly, you want a good melty-cheese, like cheddar, mozzarella or Monterey Jack.

I find add-ins to be optional and vary from person to person.  Josh doesn’t like anything added, but he does like two slices of cheese.  Paul likes tomatoes.  I like ham sometimes.  And apparently, I like green apple.

You see, once you’ve mastered the basic bread-cheese-butter formula (and arguably, what else could you need?), you should start to experiment, which is what I did on Saturday.  I tried out a new combination, which I think you should try.  That combination is: 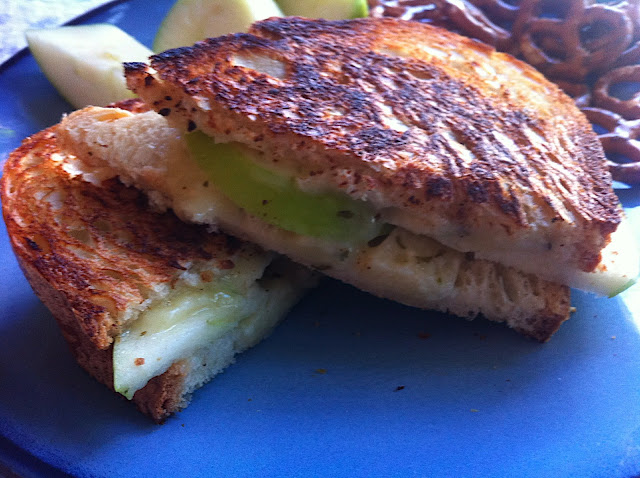 I wasn’t sure if it would work out or not but it was indeed delicious.  Melty and hot and crunchy thanks to the apple.  I ate it with a few chunks of leftover apple, some pretzels and a Mexican Coke–in a glass bottle of course.  It was like eating lunch at school again, only in a nicer, cleaner, quieter cafeteria that more closely resembled my dining room. Now that is comfort.