You know, there’s a lot of good cooking that doesn’t go in this blog.  Okay, maybe not a lot but a fair amount.  It’s not usually fancy, it’s not usually unique, but it’s generally really pretty good.  And I don’t want those things to go quietly into the gastronomical night.  That, I’m bored and I’m not yet prepared to write posts on recent experiments in buttermilk fried chicken (really good) and pancakes made with cream (really freaking good) until I’ve had a chance to eat some more try them again.

This weekend I’m on my own, as Josh is traveling in the Great Dark that is Ohio for a conference about Linux.  Yeah, I know.  I forgive him these little lapses in judgment.  Anyway, I was on my own, me and my two dogs… 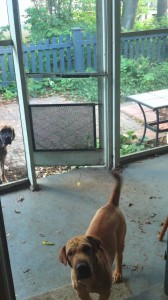 …and clearly they were going to be troublesome.  Not to mention, I was starving after a busy day at work and just wanted something right now, not a hundred minutes from now (which was actually then but I’m writing now so it all works out).  I had on hand some leftover roast beef from yesterday’s “Anticipate the Lazy” crockpot dinner, and most of a loaf of Italian bread, plus that Great Midwest leek-and-morel cheese that I am close to obsessed over and that I’ve been putting on damn near everything.  I also had a bunch of organic arugula that I bought specifically for this weekend because I knew that Josh was going away and for some reason, I thought that this occasion was in dire need of arugula.  I was right.  Totally an arugula weekend.  I had an arugula salad yesterday with just a bit of salt, pepper and some blood orange infused olive oil I picked up from Old World Olive Press in Plymouth.  I think later this weekend, I’m going to grill some pizza dough and top it with thinly sliced apples, the blood orange olive oil and I dunno.  Something else.  It’ll come to me later. 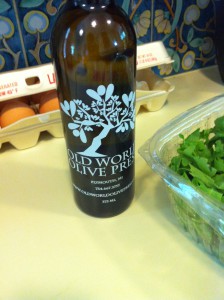 So tonight’s sandwich was very simple.  And delicious.  Josh likes to tease me because I often eat things plain, or as I like to stay, “dressed down,” but really I enjoy the basic flavors of fresh food.  Layers of caramel, chocolate and sugar-infused oats are well and good, or fancied-up side dishes, but sometimes you just want simple, healthy and good.

I sliced the roast beef as thinly as I could and warmed it up in a bit of olive oil in a hot pan.  I got out a slice of nice Italian bread–good crust on the outside, soft and chewy on the inside, delish–and sprinkled it with olive oil.  Then down went a bed of arugula.  (Seriously, a pox on anyone who thinks arugula is stupid and elitist.  Unless elitist suddenly means delicious.  Everyone should eat arugula.)  Then a bit more olive oil, a pinch of salt and a healthy sprinkling of pepper.  Then the hot beef (especially good because the smaller bits got seared and crunchy) and a few shavings of morel-and-leek jack cheese.  Handful of pretzels on the side, Mexican Coke poured into a glass and tada.  Dinner for one.  Dinner for fun.  Ok, that was lame.  But whatever.  Dinner for one, delicious as any. 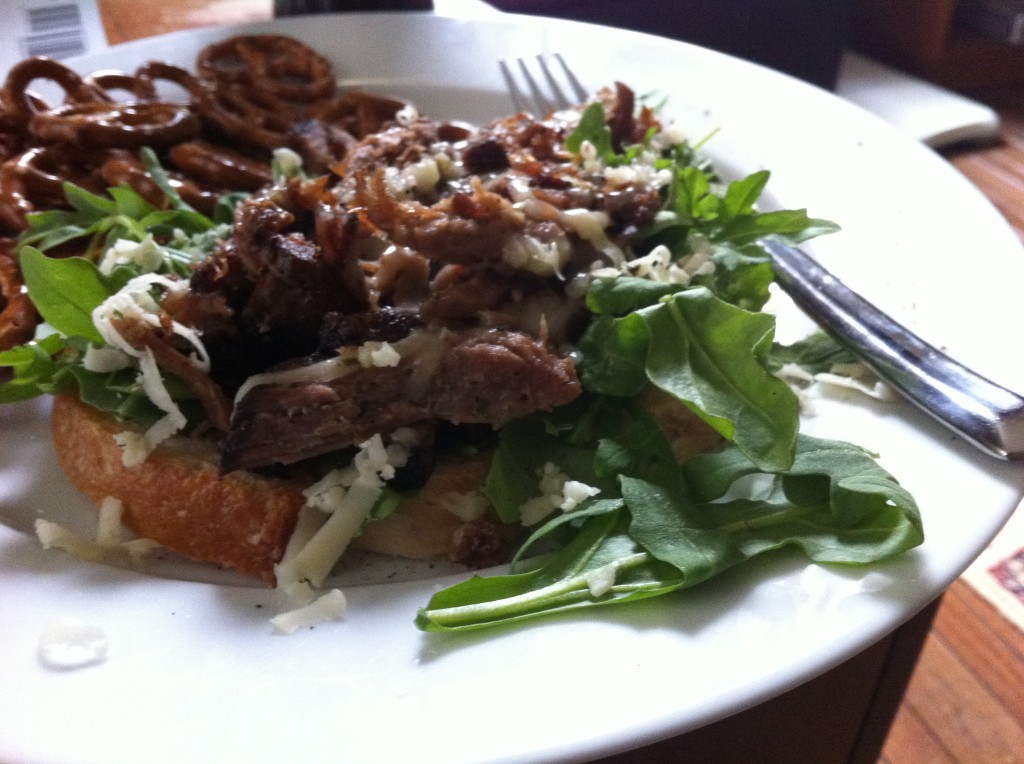