So like I mentioned in the last post, Pom Wonderful sent me another free batch of their pomegranate juice to see what I could do with it.  I love when this happens.  I like having to be creative with something.  Especially something free.  And plus, you know, I figure that pomegranate juice is so healthy for you that it totally trumps all the egg and cream that’s in this french toast recipe, plus the breakfast meats (with an ‘s’) that I served it with. 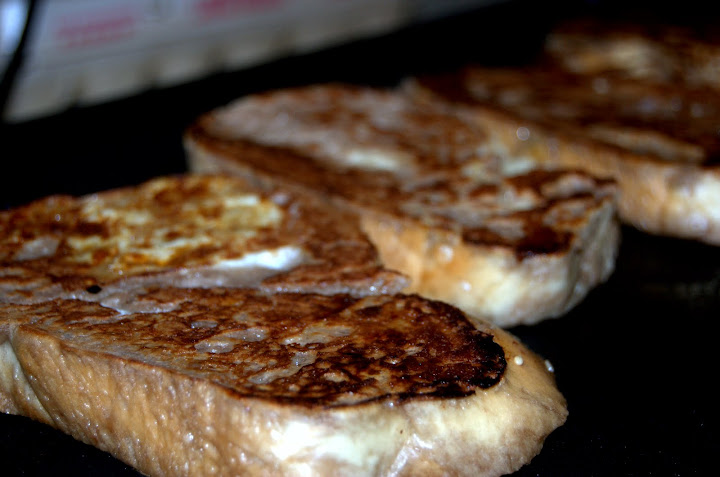 Ok, maybe not.  Maybe it won’t instantly unclog your arteries but it is full of antioxidants and hey, every little bit helps.

Oh, also it’s really tasty.  And let’s be honest here.  That’s the most important thing.  What did Lennon used to say?  “All you need is love deliciousness.”  I’m pretty sure that’s what he said. It sounds right.

So anyway…I came up with this on kind of a whim this past Sunday.  I come up with most things on a whim.  And a prayer….Who could it be?  Believe it or not, it’s just meeeeeee…..

Sorry.  Had a “Greatest American Hero” moment there for a second.  Where was I?

Josh is a big fan of french toast.  I’m really more of pancake gal myself, but Josh, he loves him the pain perdu.  He makes a mean french toast casserole.  The only downside is that french toast casseroles take some planning and work.  And you know me–I like to do things on a whim.  And a prayer.  Who could it be?  Sorry, I’ll stop now.  Anyway, I like to do things on a whi–er, more spontaneously, and with few ingredients.  I honestly was just preparing a basic french toast batter and I thought, hmm, maybe I could just throw in some of that pomegranate juice and add a little flavor without any real work.  Turns out, yes I can.

And so can you. 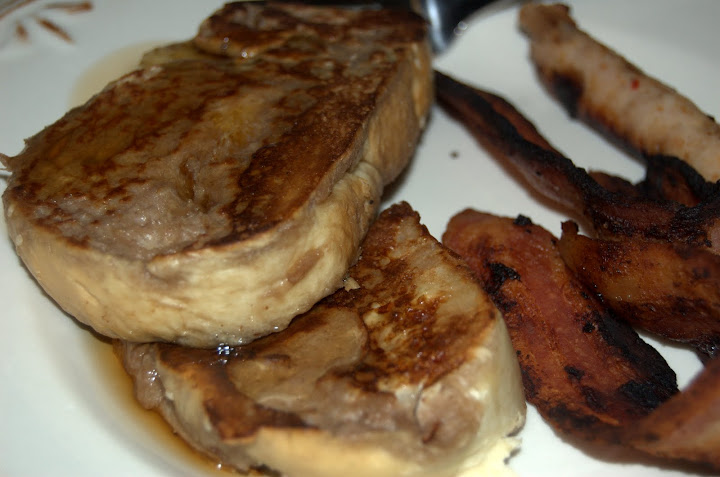 This, like so many things I do, is more of a method than an exact recipe.  We use challah bread for our french toast dishes, because it’s soft and eggy and soaks up that batter like a sponge.  The pomegranate juice doesn’t dye the bread red (somewhat sadly) but it does give it a nice berry sweetness, and you don’t even have to soak it for long.  I made it again for dinner tonight alongside a couple pieces of good fried bacon and apple pork breakfast sausage.  We ate it topped with maple syrup but I think a fruit compote would be just as delightful. 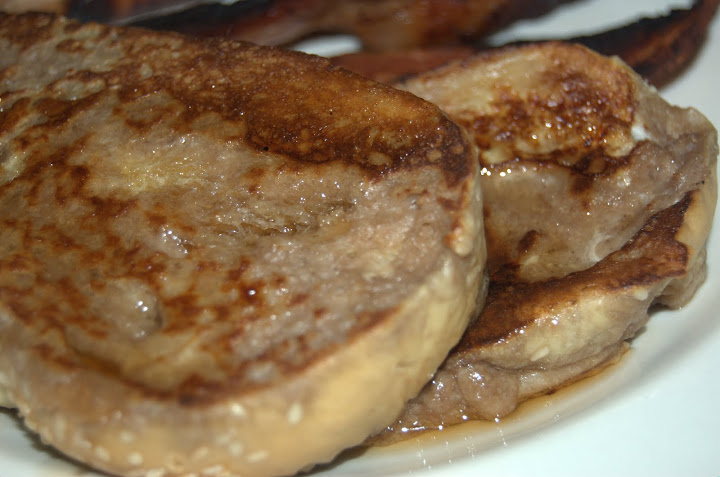 Mix the eggs, cream and juice in a baking dish.  Place bread into egg mixture and let sit for about two minutes.  Flip carefully and let marinate a couple minutes more.

While that’s soaking, heat up a large cast-iron frying pan or a griddle pan, or an electric griddle, over medium heat (or set electric griddle to about 300F).  Spray with baking spray.  Carefully lift challah slices out of the egg mixture, letting the excess drip off, and place on the griddle.  Fry until golden, about 4-5 minutes per side.  Dish out and serve.  Believe it or not, you’ll be walking on air…

…you never thought you could feel so freeeeeeee….