It was a busy weekend.  On Friday I baked several pies for a charity bake sale.  And on Saturday, well…

We needed to cut down a line of small trees by our driveway, as several were dead and falling down already.  My mom and step-dad took the wood.  As the trees were a fair-height and there were about 8 of them, Josh enlisted my step-dad’s help in the project, as well as our friend Brian.  We also invited another coworker and his family to come watch the festivities.  It was truly a feat and I’m sure that all the guys are duly sore now with all the lifting—luckily, no human limbs, dogs, fences, vehicles or power lines were harmed during the making of this blog entry. 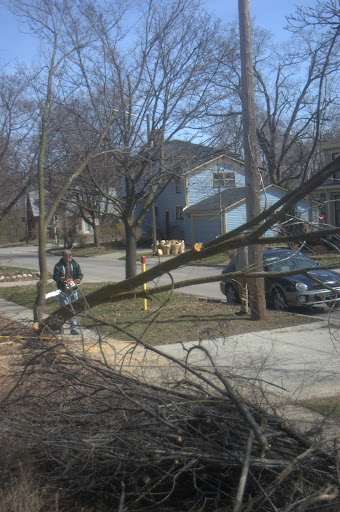 To reward everyone for their help, I planned out a big work-party feast, which, I admit, was partially inspired by a trip to Costco.  Ah, Costco–is there nothing it can’t do?

And I’m totally serious on this one.  Josh and I were doing our monthly bulk-shopping trip when we stumbled upon the deal of a lifetime in the meat department—14 pounds of pork shoulder.  For $20.  14 pounds.  Twenty dollars.  And lo, the Heavenly Choirs of Angels did exclaim in one voice: “Holy s***!  That is a great deal!”  (They probably didn’t say that—but they would, if angels ate regular food…or shopped at Costco.) 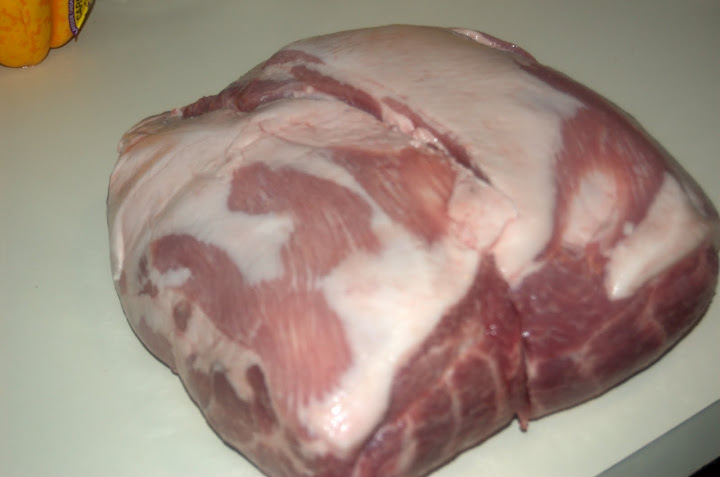 Now THAT is a whole lotta pork

So all the pieces were falling together here.  Needed a meal to feed a lot of people (10 total).  Had 14 pounds of pork.  Had an idea—pernil.  I first saw this dish on a Tyler Florence show on the Food Network and with a bit of online searching, I found a few recipes to give me a sense of what I was doing.  It’s basically a marinated and roasted pork shoulder and, if your cut of meat happens to still have the nice thick fatcap on top, you can also produce some nice crunchy cueritos, or basically, crackling, kind of.  The pictures I found online looked delicious–I had to try it.  I actually ended up cutting the pork shoulder in half, only using 7 pounds which means I still have another 7 pounds in my freezer.  Oh baby. 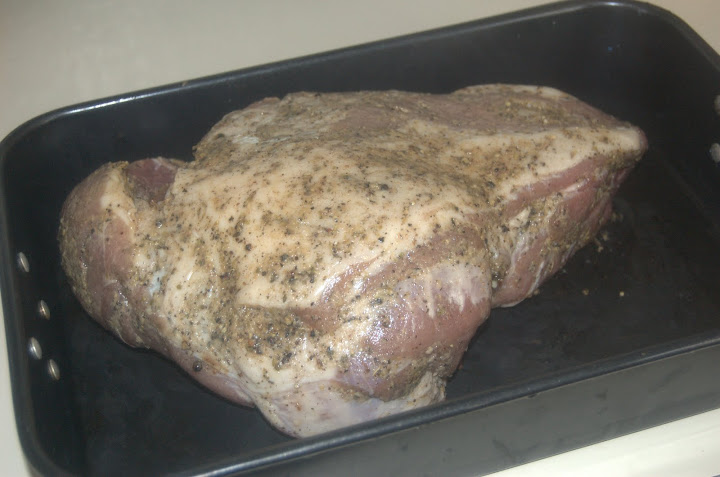 First was the marinating—it was a very simple concoction of garlic, oregano, salt, pepper and olive oil, rubbed all over and into the pork.  Next, it roasted in the oven at a high temp for an hour, then down to a low temp for another 4.  Due to the tree-cutting timeline, mine was in the oven for about 6 hours total—and it was perfect.  The first best thing about this dish was that it smelled freaking fantastic.  Even when I was just putting together the marinade, it smelled great.  While it was in the oven it smelled positively heavenly.  In fact, the entire house smells delicious.  It just seeps into the walls.  So great.  The second best thing about the dish was how easy and hands off it was–just marinate, throw it in a pan in the oven and let it go.  And the third best thing—really, the best-best thing–was the taste.  Moist, flavorful, soft, delicious.  Especially with all the fixins. 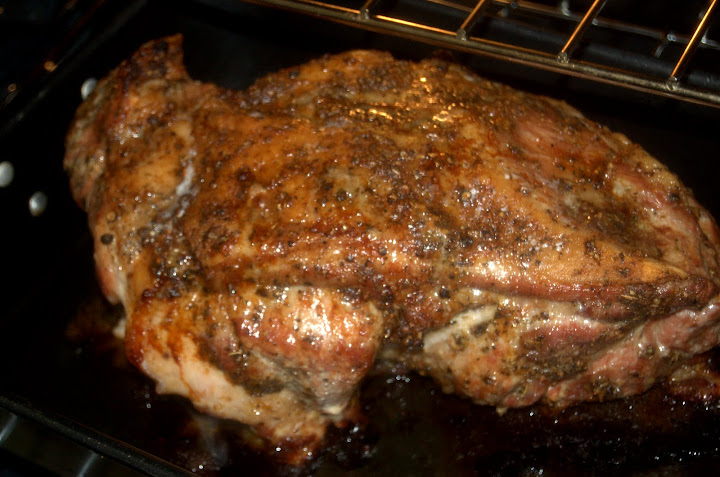 Because don’t think there was just the pork.  Oh no.  I also made a vegetarian version of my frijoles rojas, a simple guacamole, an amazing baked goat cheese salsa and cilantro-lime rice brought by my friend Rita—-and two essential staples of being: a chimichurri sauce and mojito slushies.

Let’s start with the chimichurri.  It’s an herb-olive oil sauce, although there are various ways to make it that includes other ingredients.  It’s ubiquitous in some South American countries, particularly Argentina, and I am a huge fan of it and have been for several years.  It’s also super easy to make.  You can drizzle it over meat, beans, rice dishes, vegetables….anything.  It’s just an awesome yummy sauce.

And then there was the real star of the show: the mojito slushies.  Now, I’m not a huge drinker.  I do love mojitos though.  They are my favorite drink–crisp and minty and sweet with lime.  This version takes the usual mojito ingredients and makes a slushy out of it.  Oh and it is good.  In fact, if you make any of these recipes—well, you should actually make all of these recipes.  But you should make a triple batch of the mojitos.  We needed more.  Much more.  I want another one as I type.  Ohh yes.  Yes I do….Mmmm….mojito……

I’m sorry, I forgot where I was going to go with this.

Combine cloves, pepper, oregano, oil and salt into a nice, fragrant paste.  Cut deep slits all over the meat (under the fatcap–you may have to gently cut around the cap just enough to lift it up but don’t cut it off entirely) and rub the marinade all over the roast and into the slits.  Wrap in plastic and refrigerate for 24 hours (or at least overnight).

Bring pork out to come to room temperature for at least an hour before cooking it, and warm up the oven about a half hour before cooking.  Place pork in a pan, fat-side up.  Roast at 400F for one hour and then drop the temperature down to 300F for another 4 hours or so, or until the meat shreds easily when pierced by a fork.  Cut and serve.

If you have the thick fatcap on, if it’s not crispy when you pull the roast from the oven, then turn up the heat to 400F again for the last 15 minutes or so until it does crisp up–watch it carefully.  Then cut off the fat cap and break it into pieces to serve along side the pork—that’s the cueritos. 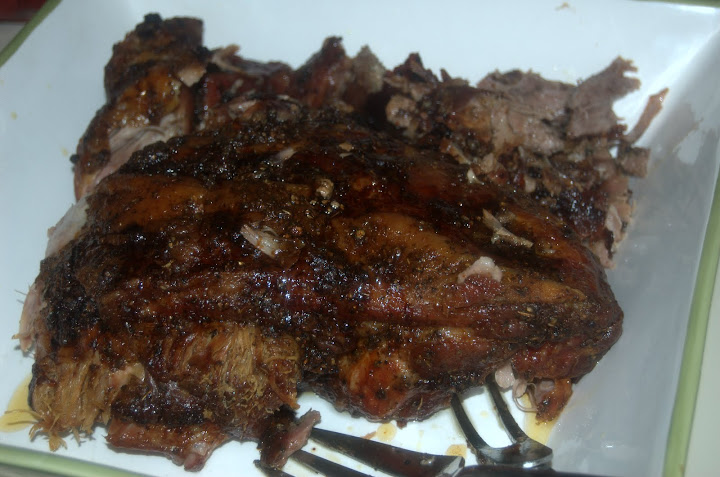 Easy right?  Goes really will with: 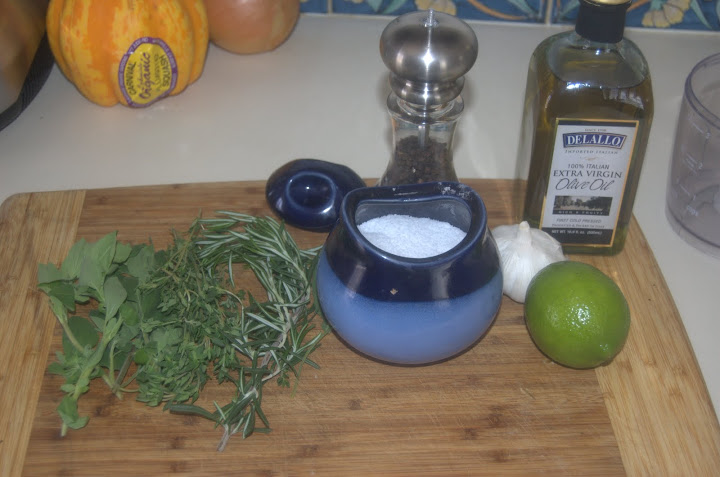 Combine all ingredients and let set for at least 2 hours before serving. 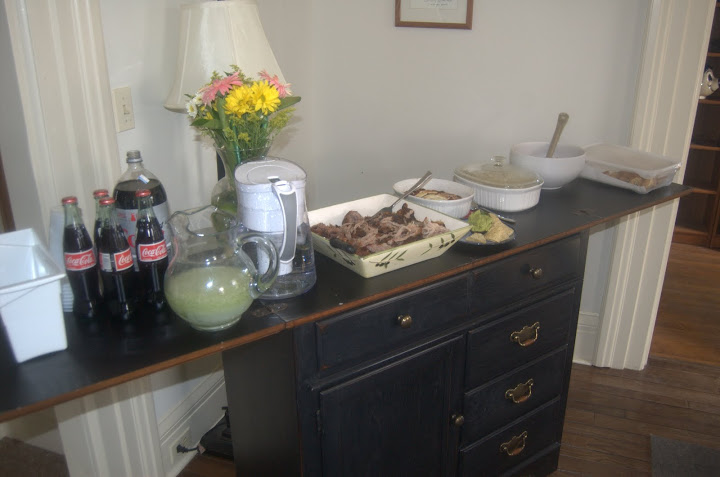 1 cup sugar
1 cup water
1/2 cup fresh lime juice, about 4-6 limes
2 limes zested
1/2 cup light rum
8 cups crushed ice
mint sprigs & lime wedges for garnish
In a saucepan over medium heat, add the sugar and water. Cook for about 5 minutes, stirring often, until the sugar is dissolved and the syrup is clear. Set aside to cool.

Put the sugar syrup, lime juice, mint leaves, lime zest, and rum into a blender and blend until smooth. Add the ice and blend until slushy. Spoon into glasses; garnish with a sprig of mint and a lime slice.

Notes from Lauren: This recipe makes 4 drinks.  You will need more.  You will crave more.  I warned you.  Also it may seems like a lot of ice, but really, use it.  It doesn’t have to be crushed already—just put a lot of regular ice cubes into the blender and go with it.  It will not disappoint.

6 thoughts on “Tell everybody that we’re having a party”