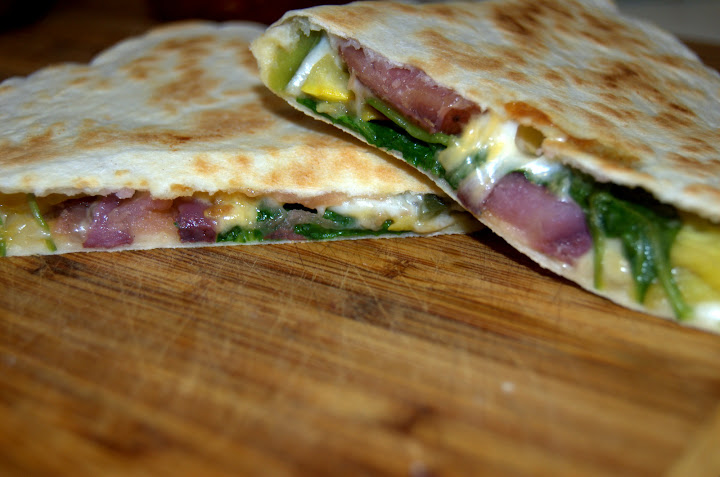 We got a good box from the farm share this week—purple potatoes, squash, peppers, a giant head of celery and even a giant one and a half pound tomato that I have fondly named Big Al (after my svelte but otherwise impressive grandfather): 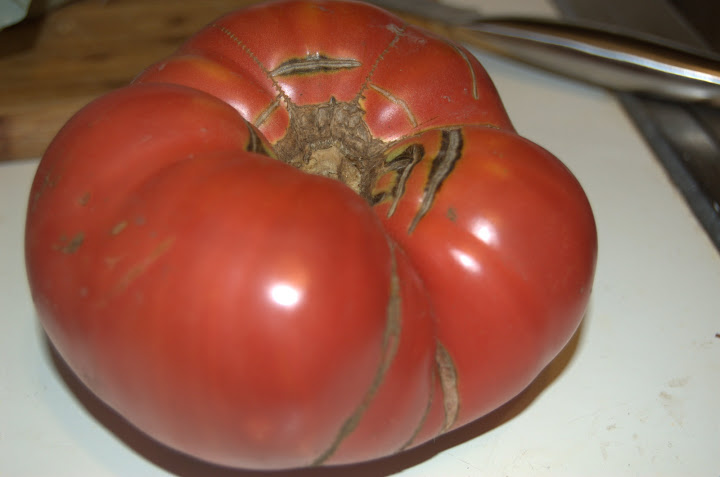 To use up some of the potatoes and squash, as well as some of our own deck-grown red bell peppers and some frozen ground sirloin, I figured we could make ourselves a quick and tasty lunch of quesadillas–beef and cheese ones for Josh (manly quesadillas) and vegetarian ones for me (I’m feeling a tad delicate today).  Inspired by a recipe I have stored away from Bon Appetit for potato, greens and goat cheese quesadillas, I figured…hey, why not?

I call this a non-recipe recipe because..well, I don’t have any real exact measurements here, and you can substitute pretty much any of the ingredients that you like.  It’s more of a method/idea suggestion kind of article today.

So what did I do?

I scrubbed clean 4 of our potatoes, which were new potatoes and about an inch and a half long each or so.  If you’re using a full-grown russet or something, one small potato will work.  Then I pierced them with a fork and steamed them in the microwave for about 5 minutes.  When they were done and cooled enough to touch, I sliced them as thinly as I could without breaking them apart. 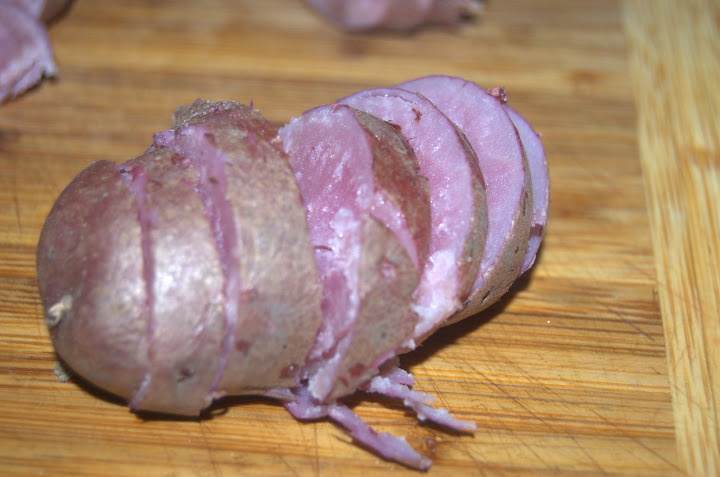 While the potatoes were steaming, I chopped and sautéed half a small onion, half a small cherry bomb pepper, a small red pepper and an awesome looking black pepper in a bit of oil. 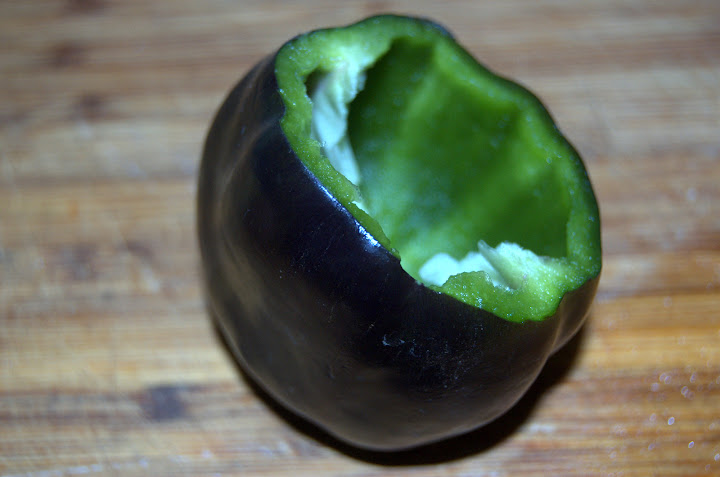 Then I added a quarter of the pepper mix to a medium sauce pan over medium heat and tossed in half a small yellow squash, sliced and the sliced potatoes, as well as a bit more olive oil, salt and pepper. I let it sit, stirring occasionally to keep the veggies from sticking.  Then I threw in a handful of arugula to wilt. 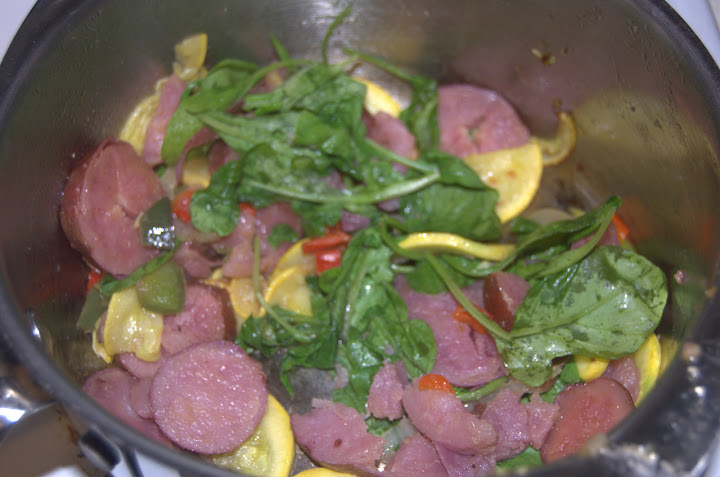 To the pan with the original batch of pepper mix, I added in a half pound of ground sirloin, a couple tablespoons of salsa, salt and pepper, and cooked until the beef was heated through.

Then I heated up my flat top griddle to 350F. I’m lucky enough to have an electric griddle, but if you don’t, you can easily do these in batches in a big frying pan, bake them, broil them or grill them outside. 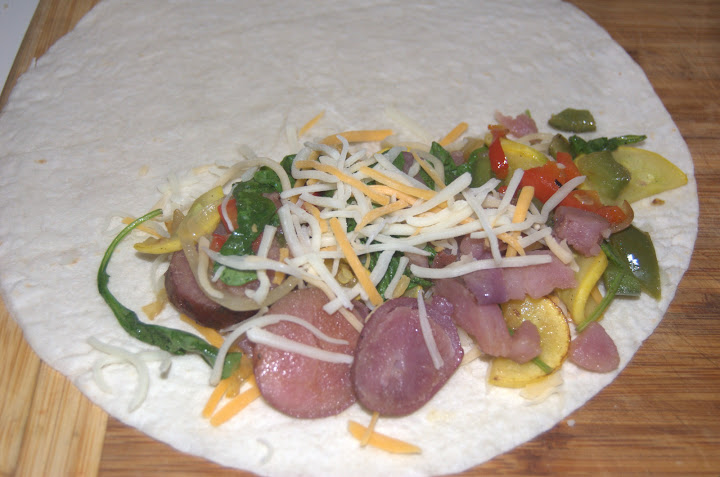 When all the quesadillas were ready, I put them out on the grill. Now this part takes very little time, you’re basically just melting the cheese and crisping up the tortillas. About 3 minutes on each side and they were done. Top with salsa and eat! 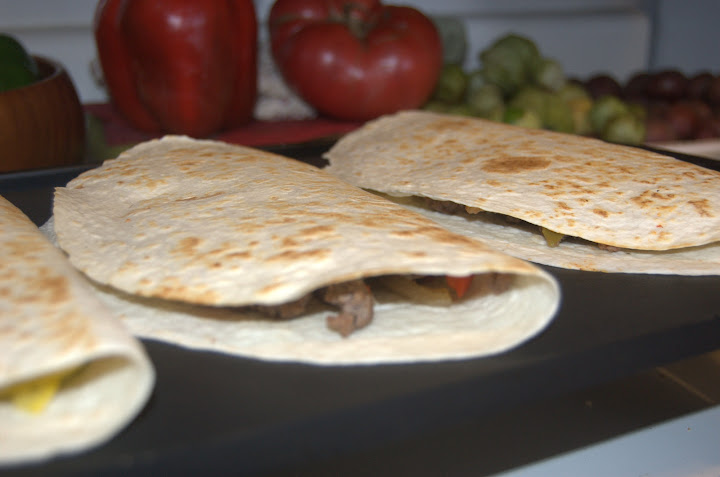 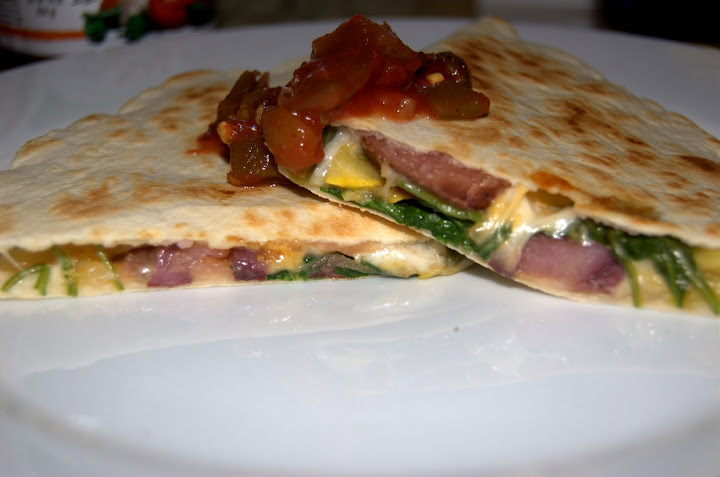 3 thoughts on “Potato, Squash and Arugula Quesadillas: the non-recipe recipe”