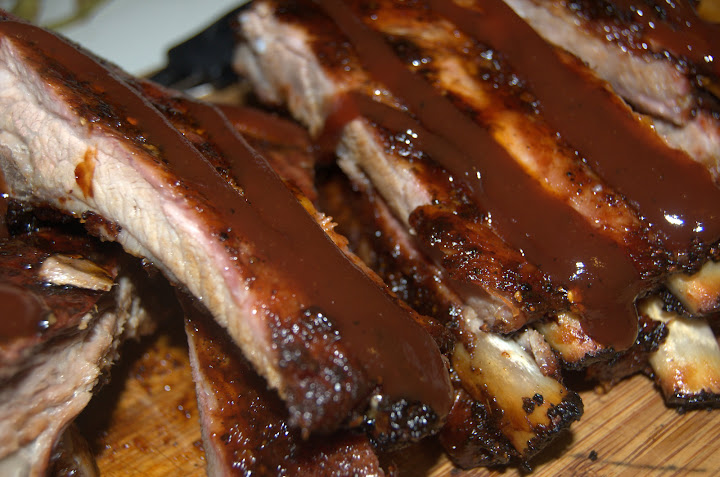 Barbecue.  Is quite possibly my favorite. food. of all time.  Now read it back again but like Will Shatner.

Seriously, I love barbecue.  I could eat it all the time and, like any good connoisseur, I have my opinions about what constitutes good barbecue.  For starters, throwing a chicken breast on the grill and slathering it in Open Pit is not barbecue.  Cooking ribs on a grill over very low heat for hours until soft and sumptious and falling off the bone–that’s barbecue.  Or smoking a nice meaty pork butt spiked with herbs and spices.  Mmm.  I am so hungry.

I generally only do “real” barbecue a few times a year.  Sure, about once every six weeks or so, I rub down a pork roast with spices and put it in the crockpot and after about 8 hours, introduce it to some great sauce and a good hefty bun and that’s my “barbecue” fix but it’s not the really real thing.  I only do it during the summer, because I consider the grill to be absolutely necessary for the process.  And I only do it a few times in the summer because if I’m going to do it “right,” it normally takes me about three days.

Yes.  Three days.  This tickles Josh to no end.  My usual process involves a bath in garlic, onion and olive oil, followed by a lengthy rubdown with a generous helping of homemade dry rub, followed by a day of slow cooking over low heat on the grill while delicious, tangy sauce is carefully applied at regular intervals until the meat is falling off the bones and I’m about ready to just stand there at the grill, tearing pieces off with my hands in some sort of deliciously primal haze.

But this time I thought I’d try something new.  Brining.  Now, I’m not new to brining, but usually it’s something I’d do before roasting chickens or a turkey.  I’ve never brined ribs before (and no, I don’t boil them either.  Boiling meat is against my religion.).  But I figured a day of brining might take my three day process down to two.  Mmm.  Tender barbecue.  Faster.  Yum. 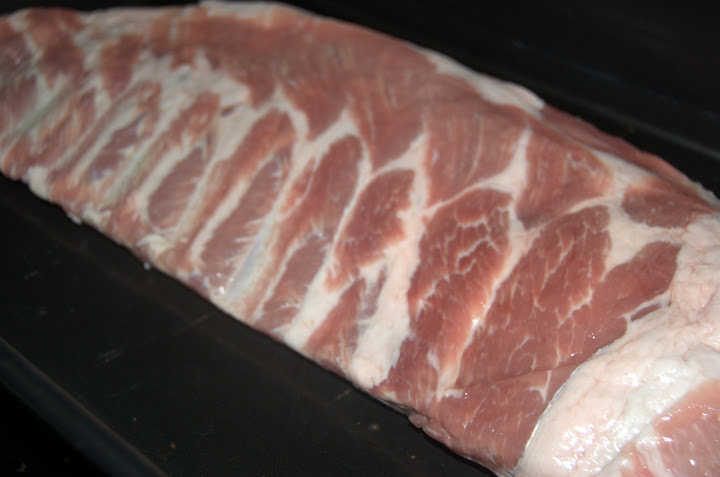 If you don’t know, brining is the process of soaking meat in a salt solution that’s generally spiked with herbs, spices and other flavorings, for a few hours or overnight.  It tenderizes, moistens and flavors meat, making it really great for drier cuts of pork and poultry, in particular.  I started the brine last night.  I brought a gallon of water, 3/4 c. of kosher salt, a large handful of black peppercorns, 1/2 cup of brown sugar, a handful of fresh thyme sprigs. a handful of dried rosemary, four large cloves garlic, smashed but mostly whole, and one medium onion, peeled and chopped into large chunks, to a boil, let it cool, and poured it over the ribs in a non-reactive pan, completely submerging the meat, and then covered and refrigerated the whole thing overnight.

This morning, I tossed out the brine, patted the ribs dry and applied my dry rub.  Dry rubs are of paramount importance in barbecue, in my humble opinion.  Sauce is great and all, as is brining, but dry rubs really get great flavor deep into the meat and they help create nice crisp crusts.  Mine tends to change with what I feel like, and what I have on hand.  This one included fresh ground black pepper, fresh ground cumin seed, paprika, dried rosemary and red pepper flake—totalling about a half cup of rub.  This was spread and liberally rubbed into both sides of the rack of ribs. 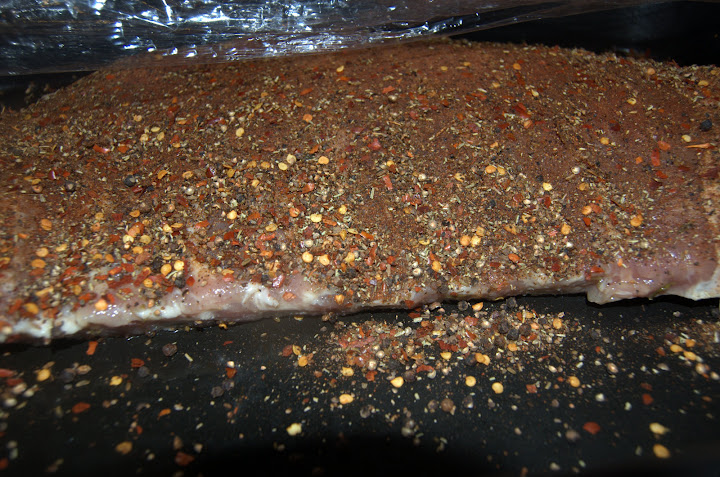 Speaking of the ribs, what I used tonight was one 3lb rack of St. Louis style pork spare ribs, which have the brisket bones removed from the bottom of the rack.  I try to get fresh ribs whenever possible; we often decide to make ribs when they’re on sale somewhere.

So anyway, the ribs sat in the rub for the entire day and when I got home, I let them warm up a bit on the counter before putting them out on the grill.  Yes, after work.  Yes.  I know.  Ribs take a while.  This one rack would need about 4 hours to get meltingly done, at an average temperature of about 250-300F.  3 hours to get just tolerable.  But that’s the price I’m wiling to pay for ribs sometimes–late dinners. 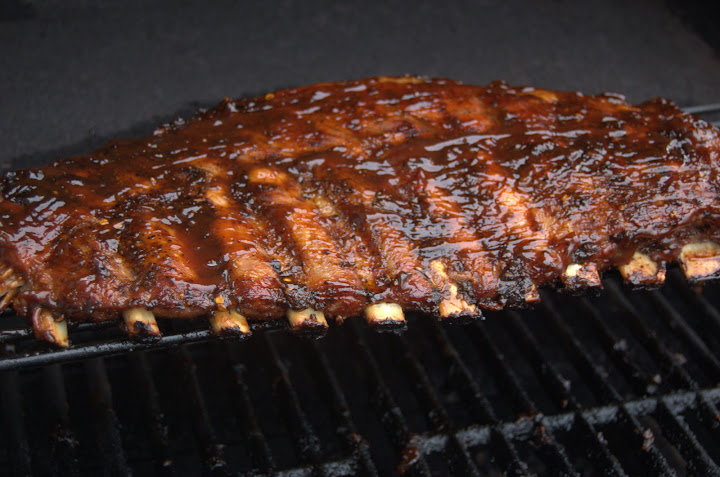 After putting them on the grill, there’s not much else there…I check and monitor the temperature every 15 minutes or so, turning the ribs, and here is where I begin to brush on sauce, a bit at a time.  There’s a lot of contention about what kind of rib sauce to go with a tomato based, more Memphis style sauce; I don’t like vinegar based ones (sorry, Carolinas).  My dad used to make his sauce from scratch, carefully mixing ketchup and spices and cooking it until just right (he makes incredible ribs..indeed, probably where I got my start and my love for the dish), but I have yet to feel the need to do that.  My absolute favorite sauce has the greatest name ever: Rufus Teague Made Some Sauce. That’s the actual name.  I know, awesome, right?  We get the Touch o’ Heat and it is uh…pretty hot.  Even for us.  And we love hot.

However, when we don’t have RT, we like to use Sweet Baby Ray’s Hot and Spicy, which we happen to have a giant bottle of, courtesy of my grandmother.

Back to the barbecue…. 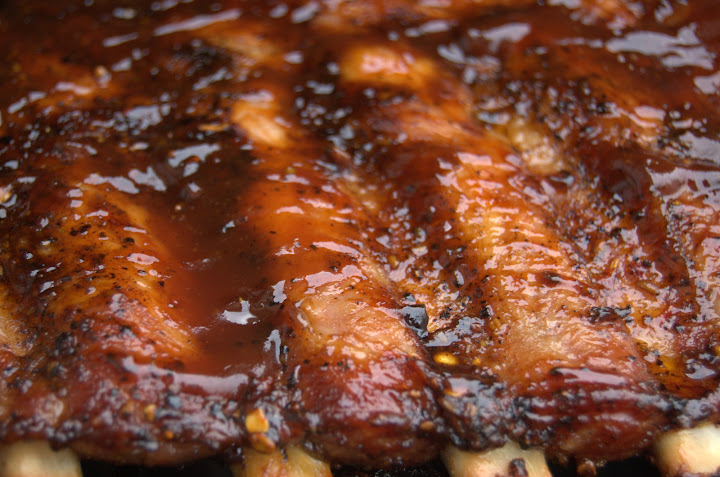 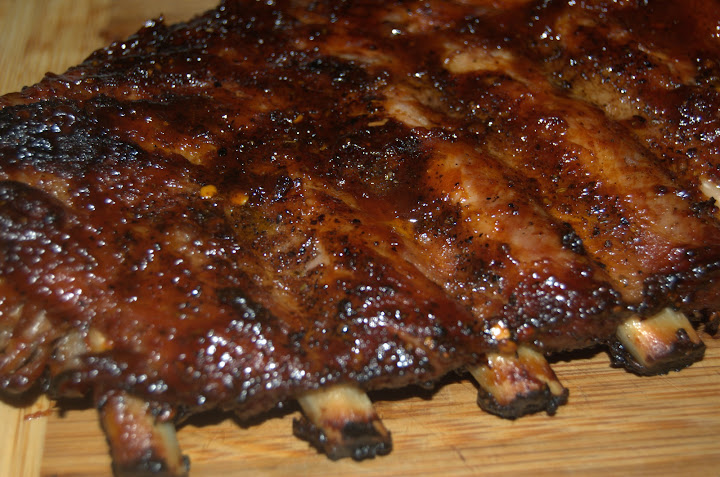 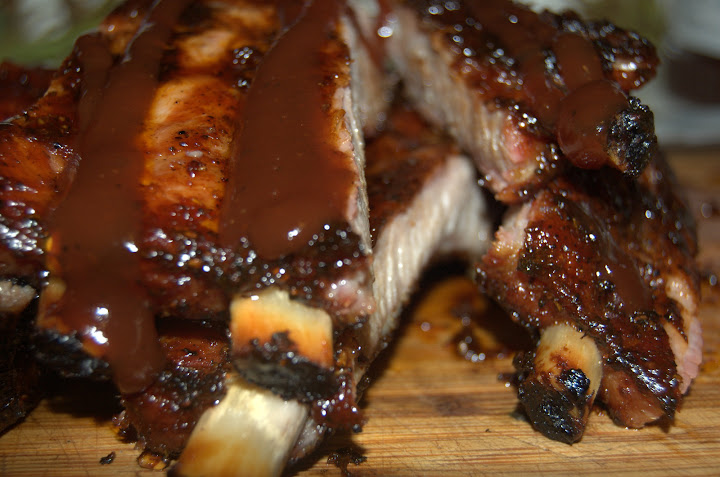 As for whether the brining was better or worse than my usual method…it was about the same, in the end, actually.  However, I think I’ll stick with my usual process…less messy :-). 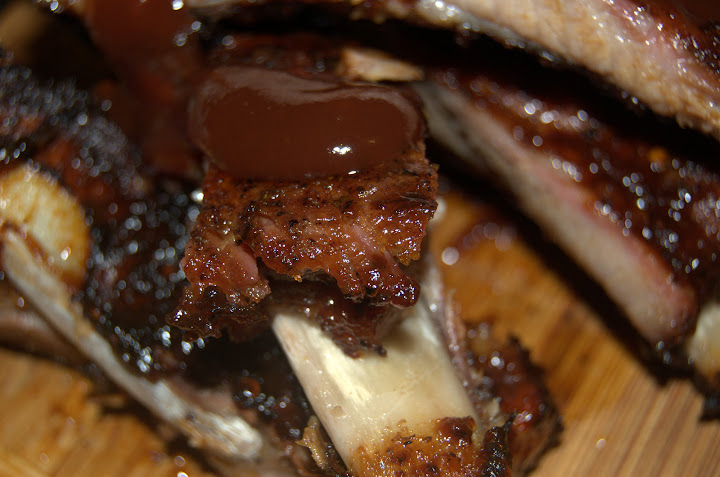 One thought on “OMGWTFBBQ”