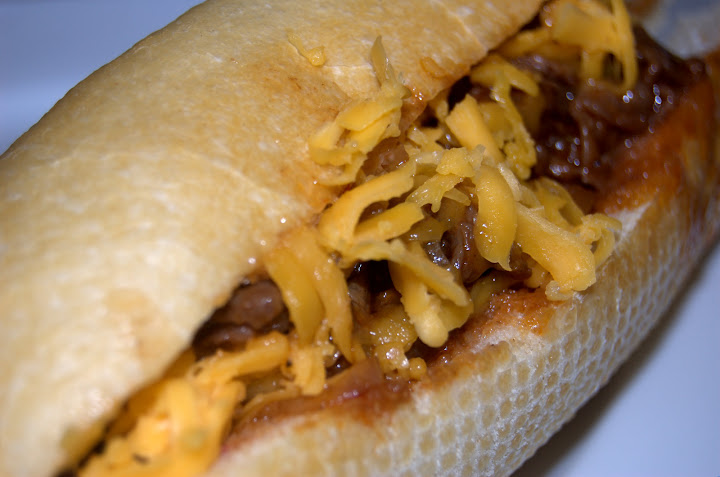 Anyway, I put it to Josh to decide what we were having for dinner tonight, since I decided the last few times.  He suggested pasta.  Mmm.  Eh.  We do pasta a lot. But it made me think of meatballs, so I countered with “meatball sandwiches.”  And then he countered with an absolutely brililant idea–why don’t we get the butcher to thinly slice a pound of roast for us and makes barbecue beef sandwiches like I get at Pizza House? I figured sure, it would be like the cheese steaks we sometimes make, but with barbecue sauce.  Delicious.

So we did.  If you’ve never taken full advantage of having a grocery store nearby with a real butcher in it, you should.  They’re trained to do it, they can do it quickly, and they really don’t mind.  Talk to them.  They have ideas, they know what’s good—and ours today clued us in on an upcoming porkchop sale this weekend…faaaabulous.  Anyway, we asked him to just measure us out a pound of one of their great looking chuck roasts and slice it paper thin. Voila!  Perfect sandwich meat.  Time to get home and get cooking.

Pour olive oil into a large skillet and warm over medium heat for 4-5 minutes.  Add onions and rosemary, tossing in the oil and cook until onions are soft and browned, stirring often, about 8 minutes. 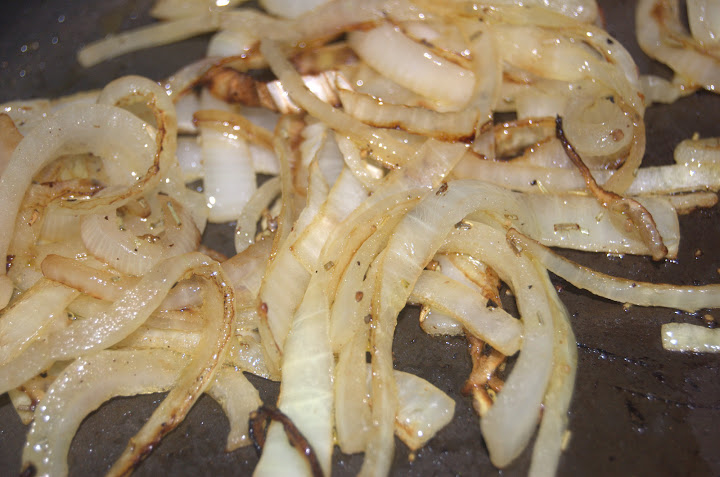 Pull beef slices apart as much as possible, add to pan, making sure meat gets as much contact with the surface of the pan as possible. 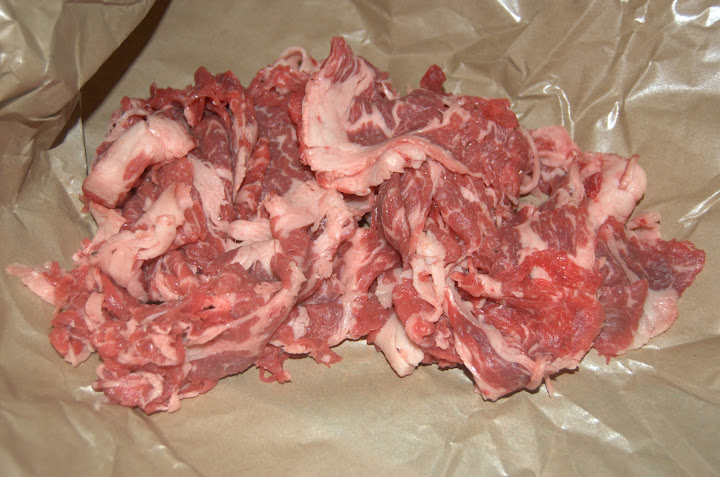 Sprinkle with salt, black pepper and Hungarian pepper.  Cook another 8-10 minutes or until meat is thoroughly cooked through and nicely browned. 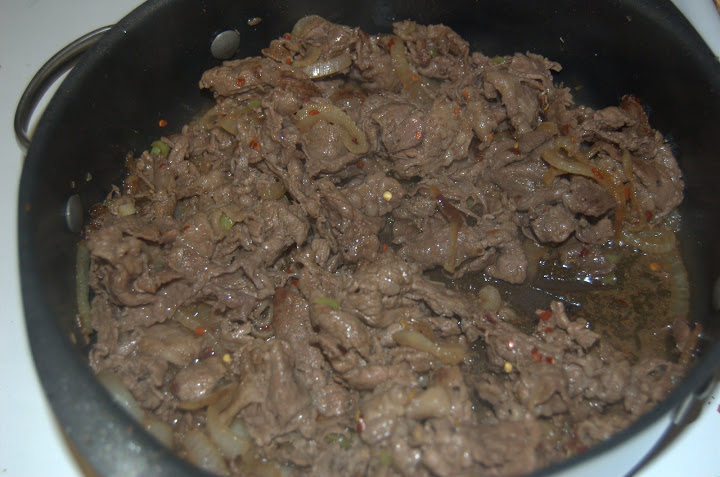 Arrange tomato slices on (or in) 4 sandwich rolls.  Top each sandwich with a quarter of the meat mixture; add more shredded cheese if desired. 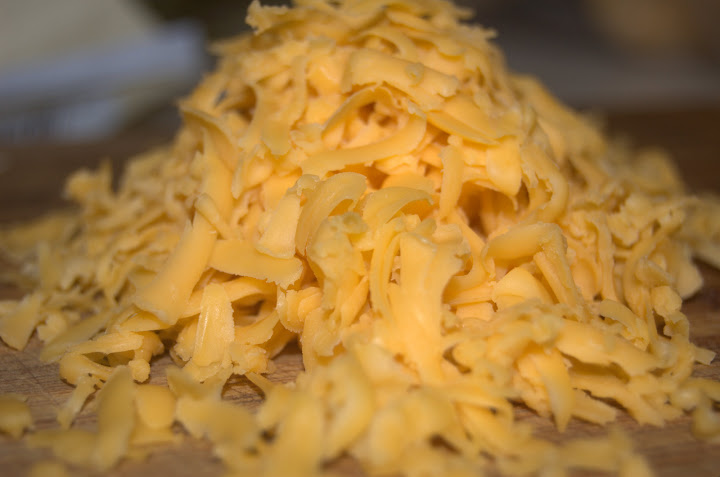 Serve with some tasty chips.  Eat! 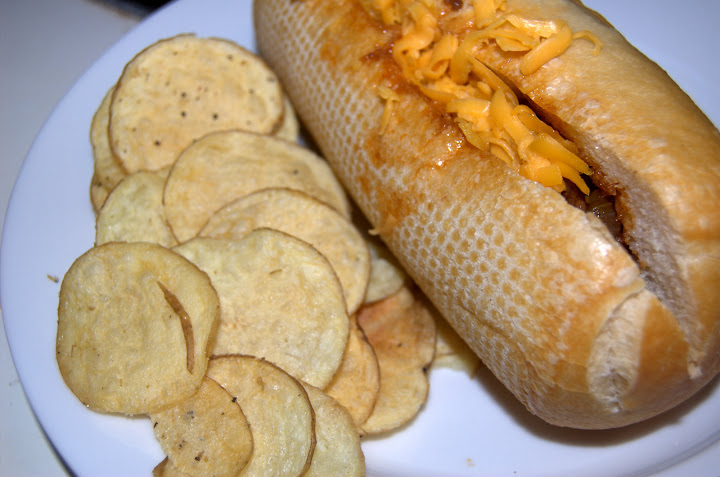 I will say that originally we had bought these gorgeous, delicious rolls to use… 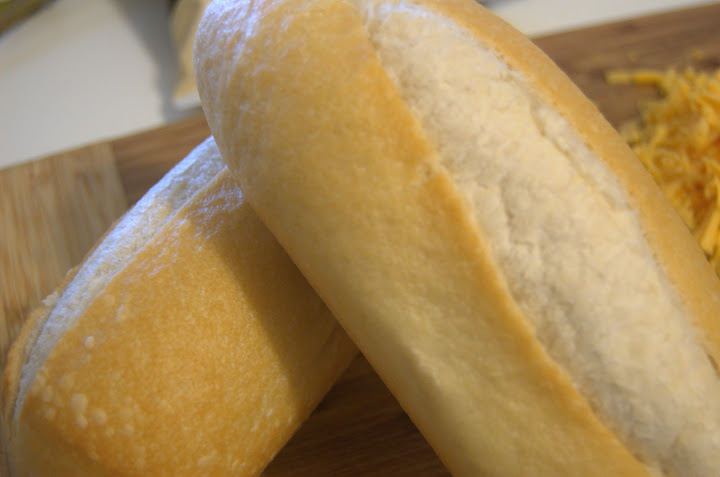 …but they were a bit too crusty for me, although Josh made it through.

I stuck with regular hamburger buns…and that did pretty well 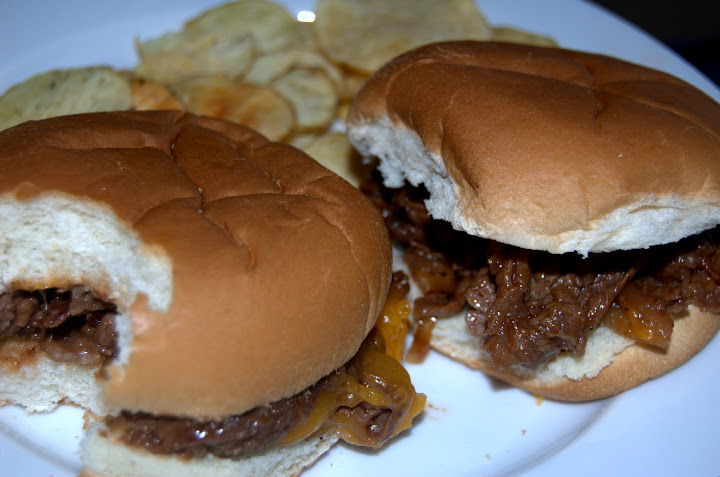 The great thing about the shaved beef is that not only does it cook more quickly and save you the effort of having to cup up a lot of meat for sandwiches, but it comes out very soft anyway, not tough or chewy.  Another great way to use it is to make an actual cheese steak, and toss it with sautéed onions and peppers, or to use it for taco meat or fold it into a quick stirfry with asparagus and edamame.  The magic never has to end.

One thought on “BBQ 2: Delicious Boogaloo”