So I’ve never tried bison before.  I eat….less meat than the average person, and generally only the basic four that I grew up with, in order: chicken, cow, turkey, pork.  No fish (I try to like it, but I don’t), no woodland creatures, etc.  I did try lamb once, but wasn’t a huge fan—it was a roast, and it was kind of greasy in my opinion, and just wasn’t great enough to overcome my guilt about eating a baby animal.

But I digress.  So I’ve never eaten bison, but I’ve heard good things about the taste, and the nutritional value (less fat, for instance, than beef), and like all Americans, especially those who shop at *cough*Whole Foods*cough*or Trader Joe’s*cough, I am pretty interested in healthful eating.  So when Josh found these delicious looking buns at Busch’s the other day (we’re always looking for the perfect hamburger buns and haven’t had a whole lot of luck), we figured that we’d grill today, the Friday before the 4th of July, since it’s gorgeous out and we’re both off work anyway.  We like to use grass-fed beef because, frankly, it tastes better, and while we were waiting at the meat counter in Whole Foods, I couldn’t help but notice the bison, just sitting there looking delicious and figured now was the time!  I convinced Josh eventually to agree.  We bought a pound and returned home, dizzy with excitement.

Okay, not really.  Then Josh had the idea of inviting our downstairs neighbors to come up and have burgers with us and that meant…we need more meat.  We had only one pound of bison for 4 people and Josh was going to eat two burgers, and they might want more too.  So we traipsed back out to the store (had to go anyway; Josh needed supplies for his Great American Root Beer Experiment, of which he will be writing entries for this blog) and got a pound of..ground sirloin.  Anticlimactic, right?  Well, we figured that a) if Jeff and Ruth couldn’t join us, we could easily use the beef for pasta later on and b) we could mix the bison and beef together to give a bit more flavor while still keeping the fat in check and then it’s a reasonable meal even if we’re not huge fans of the bison.

So what did I do?

Well, I set out the beef twins to rest in a bowl on the counter and to come to room temperature.  You don’t want to cook cold meat. 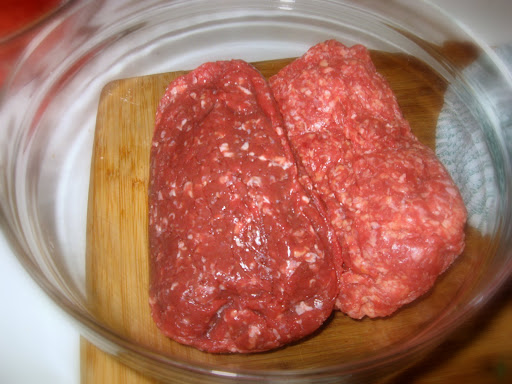 Then I added in my spices.  Not knowing whether Ruth and Jeff liked spicy food as much as Josh and I do (we like things reeeeaaahheeeaheeeeally spicy), I decided to skip “hot” spices and just go for flavor boosts.  I added in a few good sprigs of fresh thyme from off my deck, some cumin, Spanish paprika, Ancho chile powder (spicy, but not “hot;” just good flavor all around), a good dose of freshly grated parmegianno regianno cheese, salt (though just a sprinkly; the parm was salty enough) and black pepper.  Using a fork, I fluffed all the meat and spices together.  The fork thing is key.  I used to mix meat with my hands, which left me greasy and icky, and the meat all clumped together.  The fork thoroughly incorporates the meat and spices without pressing anything down; instead you get lovely, fluffy meat ready to be softly molded into airy, delectable rounds for the grill, like below: 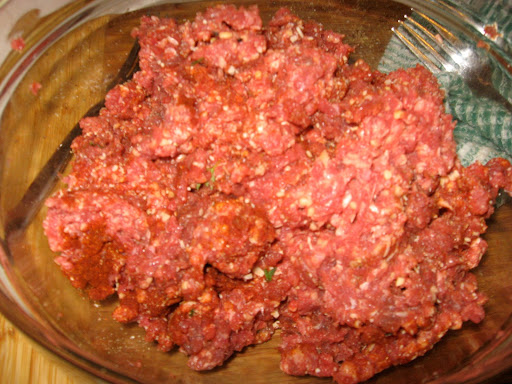 I formed 8 patties; out of 2 pounds of meat, that’s about 4oz per burger, which was ok since being fairly lean, they wouldn’t cook down much, although generally I do prefer 5-6oz per patty when I can do it. 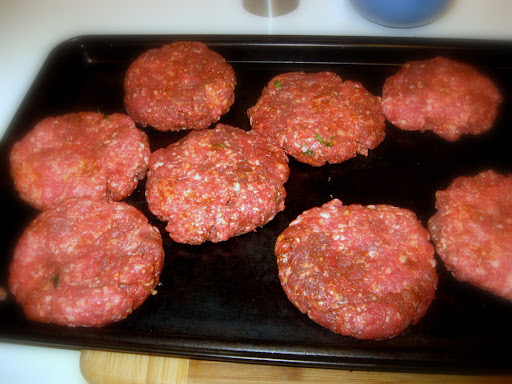 And then grilled.  Burger grilling is fairly basic.  I start with a warmed up, high-heat grill and just rest the patties on there, close the top, turn the heat down and walk away for 4 or 5 minutes.  Come back, check and see if the patties are ready to willingly give up their cozy spot and flip over….flip once, closed lid, hightail it away from the grill.

I also tend to grill the onions, too, because Josh likes it that way. 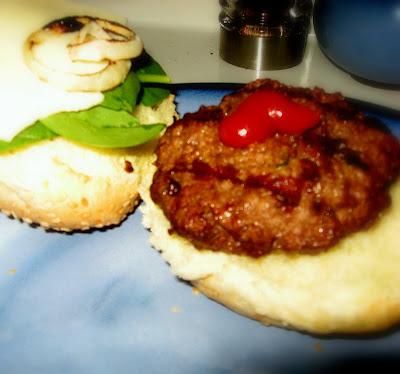 The general consensus on the burgers was that they were delicious.  Burger building is a personal choice, so to each his own.  I made mine up with a good bit of ketchup, some grilled onion, some sliced Swiss and baby spinach leaves.  Yum!  The buffalo burger will need to be further tried…I’m thinking next time…mushrooms, blue cheese, caramelized onions.  Yeah.

One thought on “Home, home on the range…something, something buffalo”