Those who know me know that I…hate fish.  I don’t want to hate fish, but I do.  I don’t like the smell, I don’t like the texture.  I want to like it because it’s versatile and because that’s a whole arena of the culinary world that I don’t get to participate in.  Luckily, Josh does like fish, so from time to time we try out something new in the hope that maybe I’ll come around (I haven’t).

However, having only previously grilled tuna and salmon, this was my chance to experiment with whitefish.  We got a half pound filet from the store (I had been thinking tilapia, but we asked the fishmonger and she showed us a pretty, thin filet of whitefish that she said had great flavor and held up well.  Great flavor, maybe, I dunno, but it definitely didn’t hold up well) and some other staples: corn tortillas from the local Ann Arbor Tortilla Factory (that was Josh’s experimentation; I love corn tortillas but he’s pretty strictly a flour-only kind of guy), roma tomatoes and Serrano peppers for homemade salsa (we like ours spicy) and ripe avocados for homemade guacamole (which went excellently with the fresh limes we’d gotten from Eastern Market the previous week).

I didn’t really have a recipe… I mean, really, I don’t very often anyway.  I ground up some cumin seed, coriander and black pepper and dusted it over the fish with a bit of kosher salt and lime juice and grilled it til light and flaky.   It was very quick and easy to cook; Josh says the fish was good, and I’ll take his word for it.  I had one taco with fish in it; my other one was vegetarian!  I will say, the fish one wasn’t too bad; with all the flavors mixed together, I could almost forget about filet :-).  I would definitely like to try the tilapia next time though. 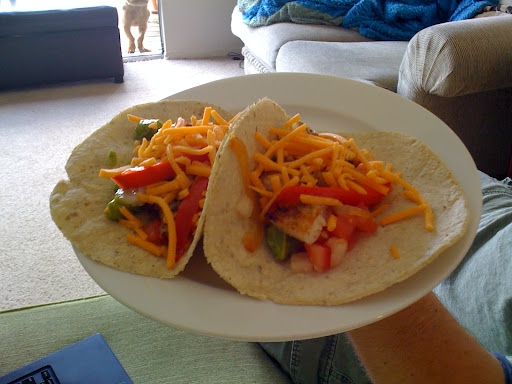 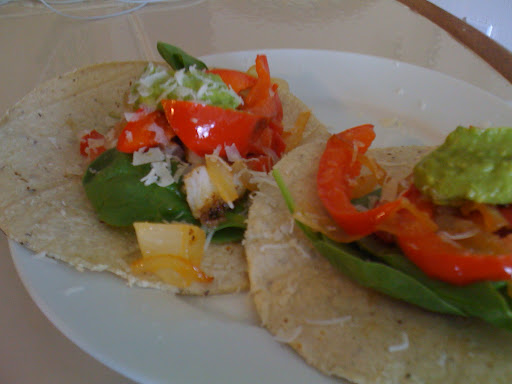