So we didn’t really wake up until almost 10am this morning.  By the time I finished taking our dog Winston on a 2 mile morning walk, breakfast was pretty much a no-go.  So Josh and I each downed a bit of fruit and then pondered what to do for lunch.  I was already of the opinion that we should have hot dogs, because hey, I’ve been in a hot doggy kind of mood lately.  In lieu of trekking to the store, picking up what we’d need for do-it-yourself dogs (I mean, there’d have to be buns and peppers and Josh gets one kind of sausage and I get another and side dishes and eh), we decided on taking the dog for a nice jaunt over to Bill’s Hot Dog Stand in Ypsi.

Bill’s is…well, it’s a little yellow shack, really, on Michigan Ave in Ypsilanti (waaay far in Ypsi) around the corner from where I grew up.  Bill’s has been there…forever, pretty much.  My entire life anyway.  It’s an old school car-hop kinda place and they mean serious business.  They do hot dogs.  And root beer.  And that’s all they do.  Seriously.  You can only buy three things at Bill’s: hot dogs, homemade root beer and Ruffles chips.  And I will be damned if it is not the best root beer in at least the state, if not the entire western hemisphere. 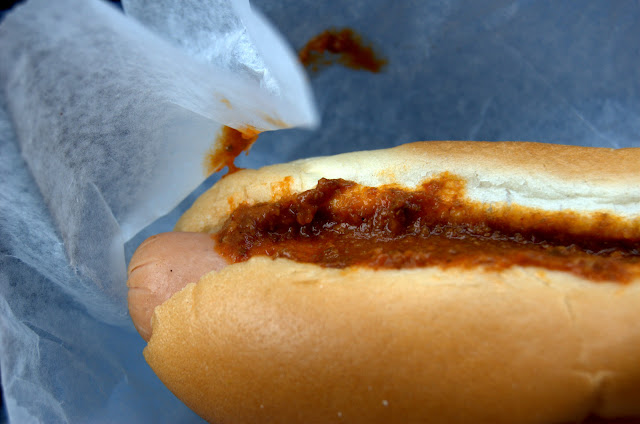 I’ve also noticed that Bill’s is a lot like Dairy Queen…the clientele is a giant cross-section of Americana.  We drive up and park, Winston sitting in the back, and one of the guys comes over to take our order.  The other thing I like about Bill’s, besides being laid back and delicious, is that it is CHEAP.  We can get 4 chili dogs (no onions), 2 bags of chips and 2 to-go cups of root beer for $8.80.  $8.80.  We can barely get breakfast for one at some of the places we frequent in town.  It’s fantastic.  Guy takes our order, comes back in a bit with our food, we exchange money and change, he leaves, the dog lays down in the backseat to sleep and Josh and I are free to savor our chili dogs and root beer and watch the world on Michigan Ave go by.  We certainly aren’t the only ones either–cars come and go as we sit—old, beat up vans, bright yellow mustang convertibles, our hybrid, some small economy Fords, a very expensive looking car of some make and model (hey, I’m a foodie, not a Ford exec) that desperately screamed “Midlife crisis!” (although the convertible also had that going on too), and more.  Because everybody loves hot dogs.  And everybody loves Bill’s. 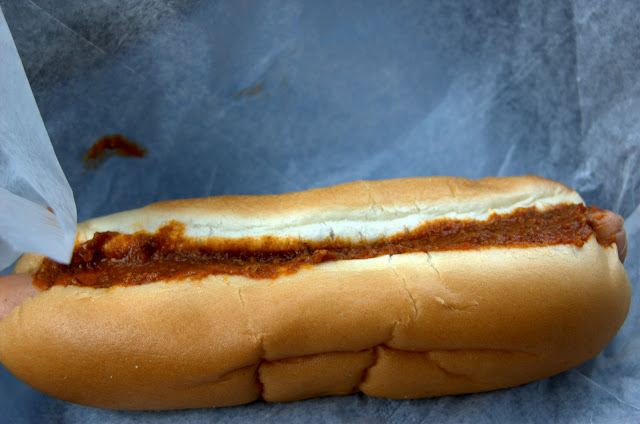 One thought on “Eat at Bill's”