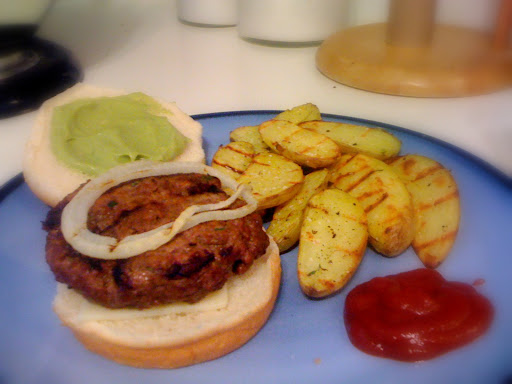 So. Full.  So deliciously–nay, delectably full.  So content.  So…you get the idea.

We made hamburgers tonight.  Glorious hamburgers.  I wanted to try pure bison burgers, but the meat counter was out of ground bison, so there went that idea.  There was also no grass-feed beef available (what is the deal?!).  So we made do with just ground sirloin.  And it was great, but I think it might have been even more colossally fantastic with the pronounced grassy flavor of grass-fed ground beef.

Tonight, it was just me and Josh, so we split a pound of meat (Josh had two burgers, I had one).  Using my usual technique, I started with the meat in a bowl and added in my spices: fresh thyme, cumin, Spanish paprika, red pepper, black pepper, salt, and most of one serrano pepper, chopped with the seeds removed.  Then I fluffed the spices and meat together with a fork and by hand, divided the meat into three big balls which I then formed into three patties that were a bit over 5oz each.

But I should back up.  Before I started forming the burger patties, I par-boiled a pound of fingerling potatoes, so that I could finish them later on the grill.  I put the potatoes into a sauce pan, poured in cold water until the potatoes were just covered, put it on the stove over medium heat with a lid and just let it go until boiling; after that, I removed the lid, sprinkled in some salt and let it cook for another 10 minutes or so.   Then I drained the potatoes and rinsed them under cool water to get them down to a temperature where I could touch them with my hands.

After making the hamburger patties, I sliced the fingerlings in half and sprinkled them with salt, pepper and chopped fresh thyme and spritzed them with some nonstick spray. 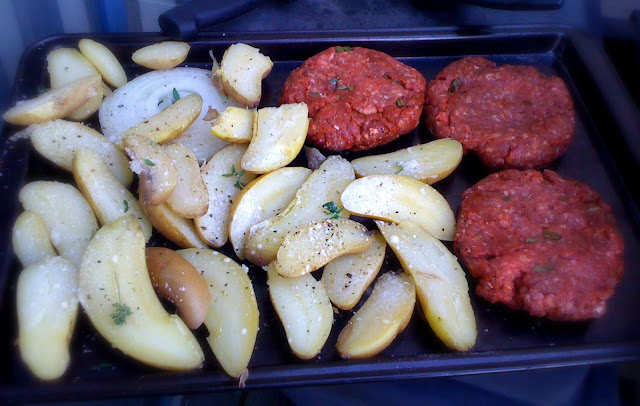 Then onto the grill!

Josh started it up for me on high heat, which is how I always like to start my burgers off.  Onto the grates went the three beautiful burger patties and all the potatoes (except for maybe one or two which I maybe might have possibly eaten on the way to the grill), plus a few rounds of onions.  I turned the burners down, closed the lid and left it to its own devices while I went to assemble the burger toppings.  After about 5 minutes, I came back, checked the potatoes, flipped the onions and burgers, closed the lid and went back inside for another 4-5 minutes.  Then off came everything—and it all looked fantastic.

To top our burgers, we had the usual bbq sauce, ketchup and mustard, plus sliced Swiss and cheddar cheese, heirloom tomatoes and our grilled onions, plus a nice simple guacamole of just ripe avocados, lime, salt and pepper.  We used dense sesame seed buns we picked up at the store, and on the side we had our grilled fries and homemade root beer (which I’ve been trying to get Josh to write an entry about).  It was…divine.  The cool creamy guacamole was an excellent counterpoint to the spicy, juicy hamburgers and the potatoes had that great grilled, crispy outside with a soft warm center.  Definitely my favorite dinner in a long time. 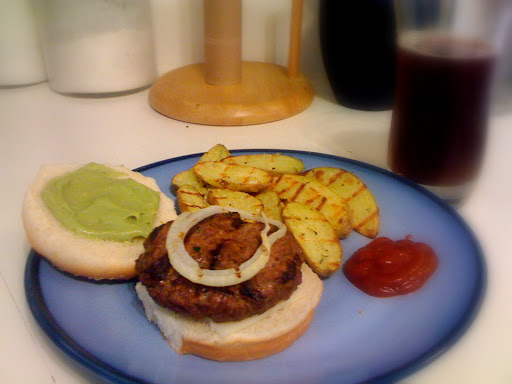