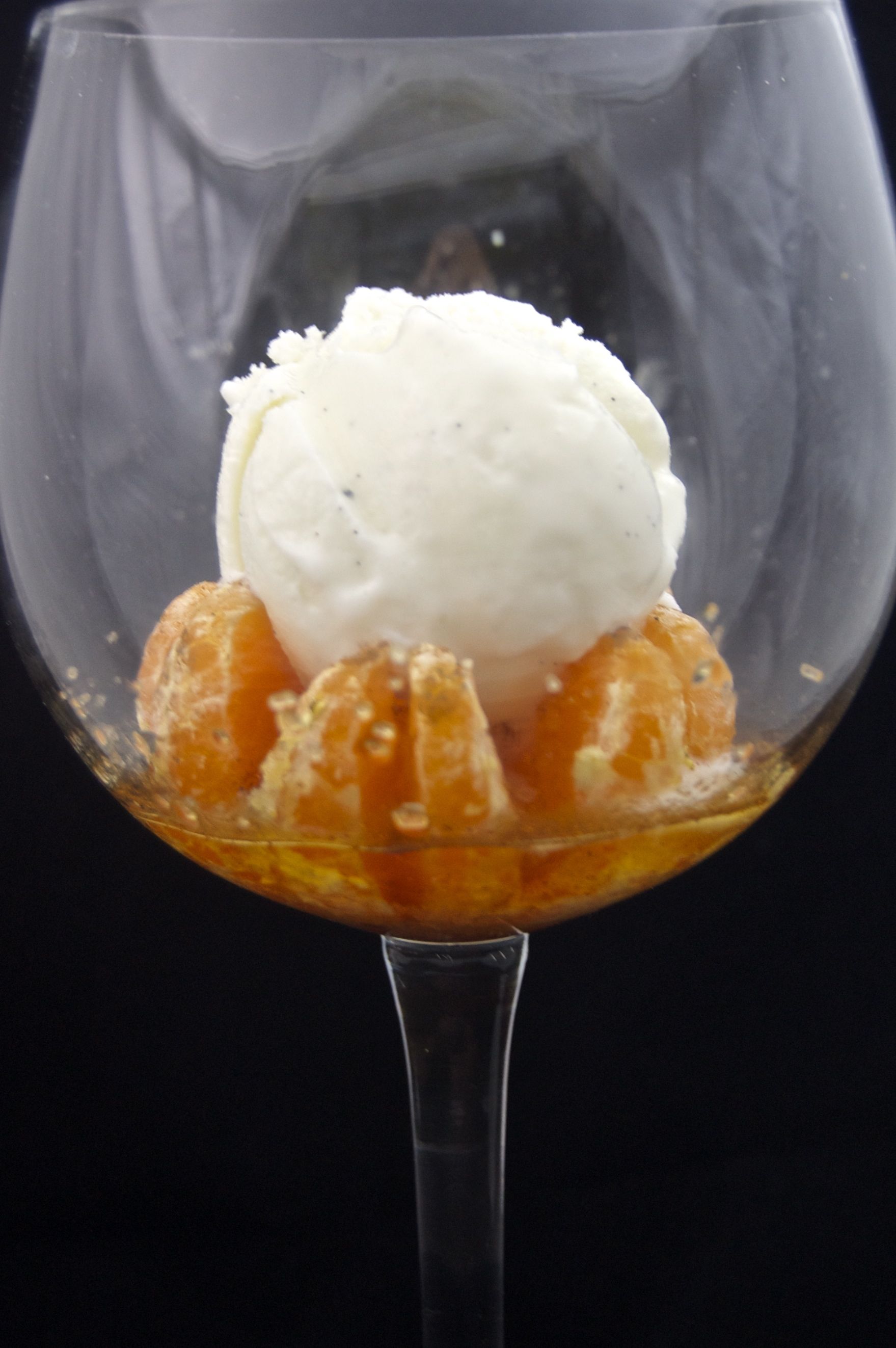 Did you have a merry Christmas?  Or, if you don’t celebrate Christmas, did you have a terrific Tuesday?  I did.  I got to spend time with friends and family and relax and eat good food.  That’s what holidays are truly about.  And I’m lucky enough to be off work for the next two weeks, and it’s a good thing too because I have serious plans for my kitchen and pantry…but more on that in a later post.

I promised you the third and final installment of our Citrus Dinner series—that is, the recipes and dishes we made for our citrus challenge, featuring delicious and fresh satsuma and clementine oranges from Whole Foods.  Thus far we’ve covered a delightful Champagne Wednesday cocktail (berry punch with clementine simple syrup) and a wholesome cheese plate (goat cheese, olive oil, raw almonds, fresh satsumas), plus two main courses (clementine-roasted chicken with thyme, mushrooms and tofu en papilotte).  Now, for the grand finale….

I love it when oranges are in season because they are true delights–simple, delicious and satisfying.  They also pair well with a variety of flavors, many of which really epitomize winter for me: vanilla, cinnamon…almond liqueur

I wanted this dessert to be the same and I’m really pretty happy with how it turned out. 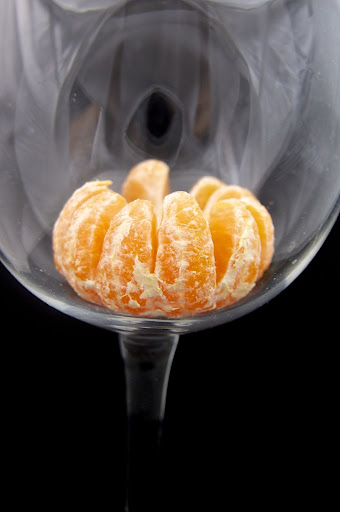 I decided satsumas were perfect for this because they’re small, I love their flavor and they are very easy to peel.  I took the skin off and slowly opened the fruit almost like a flower (similar to the one in the cheese plate here), while still keeping the slices still connected at the bottom.  Then I did the only sensible thing one can do: I put it in a glass and poured amaretto over it.  And let it soak for 15 minutes. 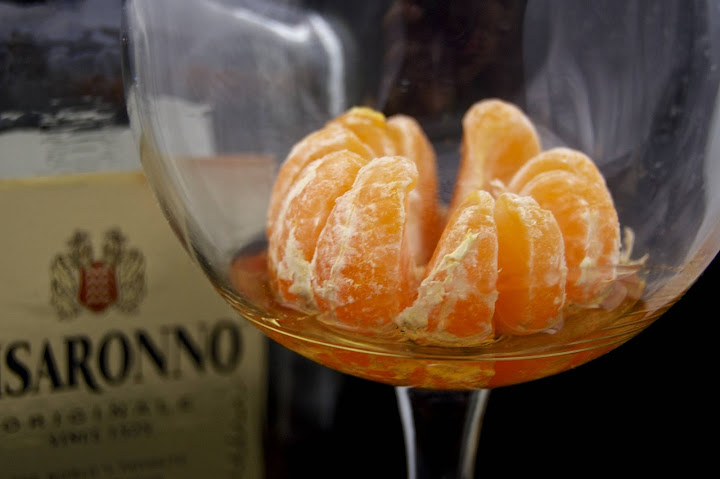 Then I sprinkled the satsuma with a bit of raw sugar and ground cinnamon. Using one of those long candle lighters, I caramelized the sugar and the edges of the fruit.  Then I added a scoop of Whole Foods’ vanilla gelato into the center of the satsuma.  Voilà!  Dessert and a drink. 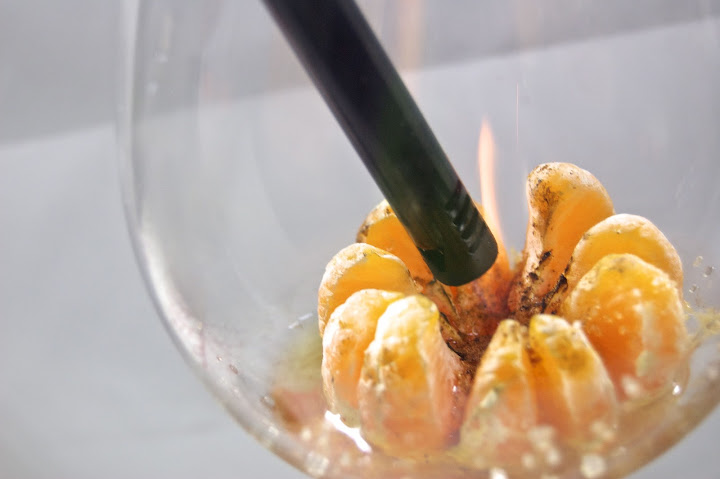 The amaretto nicely infused the satsuma, and was beautifully complemented by the crunchy sugar and cinnamon.  The gelato was soft and vanilla-y but not really sweet which finished the entire thing off perfectly.  Plus…this is a gorgeous little dessert.  Just look at it. 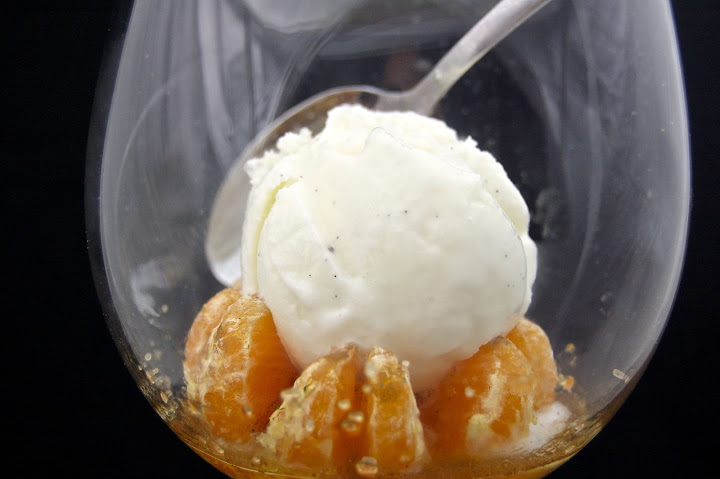 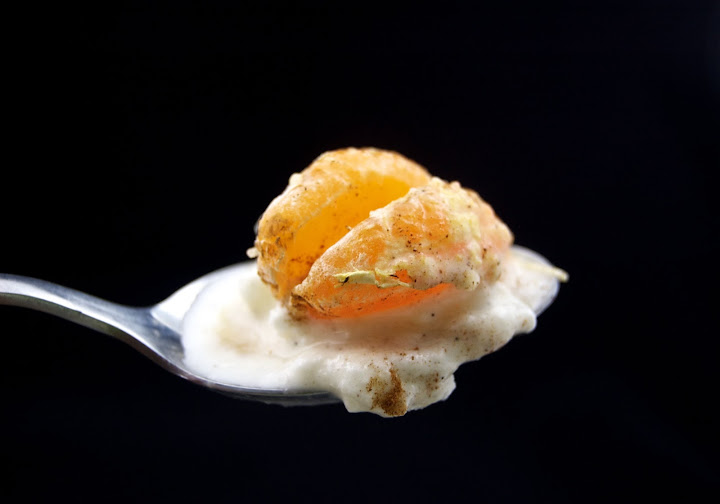 This is a great, easy dessert dish for one or two people.  You could even mass produce these–say, for your New Year’s Eve party this year.  In that case, I would suggest putting all the satsumas (peeled and opened slightly) in an oven-proof dish and soaking them in the amaretto all at once.  Then sprinkle them with the cinnamon-sugar and place them under the broiler to caramelize.  Move them to individual glasses, pour a bit of the leftover amaretto on top and add scoops of gelato.  Impressive and do-able.