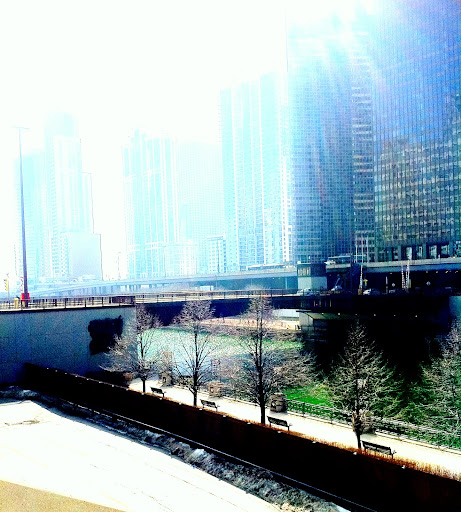 Josh and I headed down to Chi-town this past week so I could attend a work conference.  It was good timing.  The weather is finally starting to turn around, it was beautiful, the St. Pat’s celebration was in full swing, green river and all and I was itching to get to a bigger city and do what’s really important–eat.

I didn’t have any culinary plans, really.  The conference–and our hotel–were downtown in the thick of everything, and so my only real guideline for the week was “wander around until you find something that looks tasty that doesn’t have a one hour wait.”  And that’s pretty much what we did.  While the downside of just wandering until you find a place is that the place might suck, you also sometimes run into awesome places that make you go, “Mmmm.”

The first night, Saturday, we still tired from traveling down, even though we took the train, which is, in my opinion, the most civilized way to travel short distances in the US these days.  No groping, no pat down, no rifling through my stuff, just get on the train, find a seat, hand over a ticket, relax til you get there.  Divine.  So we basically just wandered until we found a place that had a decent sounding menu but not an hour’s wait.  That place was Bandera, on Michigan Ave.  Dinner was an hour wait unless you were willing to sit at the chef’s counter, which we–and apparently only we–totally were.  In fact, sitting at the counter and watching the cooks prepare the plates was way more awesome than the food, which was pretty good.  We had drinks, an appetizer of a giant roasted artichokes and then Josh got a French dip sandwich and I got this Bandera-style roast chicken with amazing rice that tasted, frankly, like golden chicken fat. 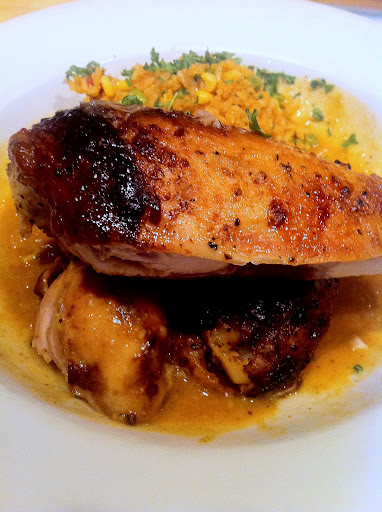 Sunday we made a trip down to Chinatown and picked up a bag of pork buns from one of the bakeries.  Mmm.  Pork buns. 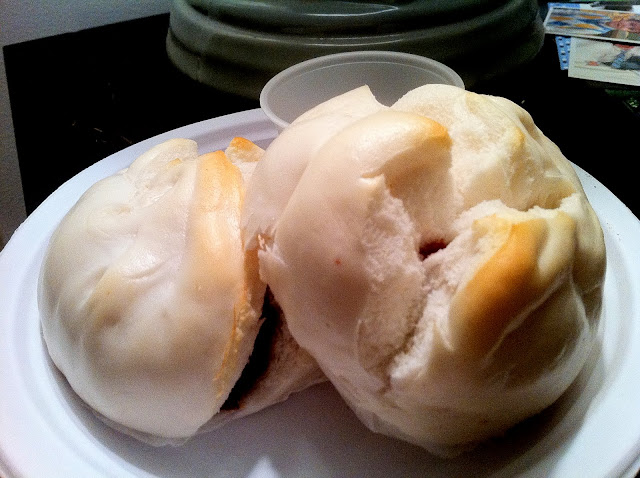 Then we followed that up with dinner at Volare, an Italian restaurant near our hotel.  It was small, and not much to look at from the outside, and rather crowded inside but the food was really pretty good.  Italian and ciabatta bread, good olive oil, salad and Josh got a plate of spaghetti with giant meatballs while I had the chicken vesuvio (chicken, white wine, peas, potatoes).  Actually very tasty. 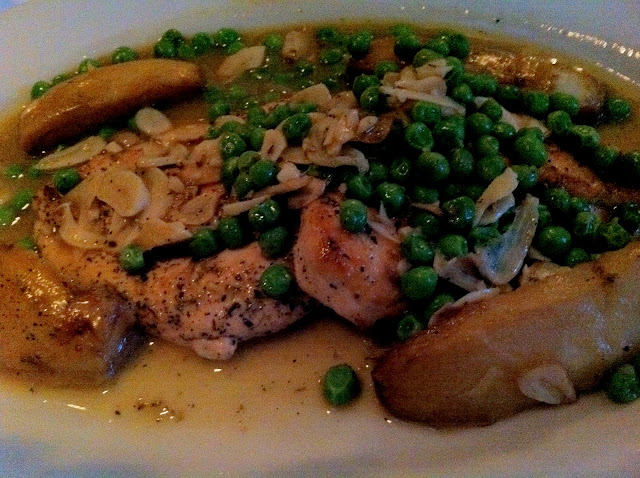 Monday we had breakfast at West Egg, which we tried to get into on Sunday but it just wasn’t going to happen without an hour wait.  The week day was much more amenable to my unwillingness to wait.  It was a casual breakfast/lunch kind of place, not too expensive and good food.  Josh got a chorizo omelet while mine was stuffed with bacon, cheese and a thick layer of avocado through the middle.  Anything with that much avocado has to be good.  And it was. 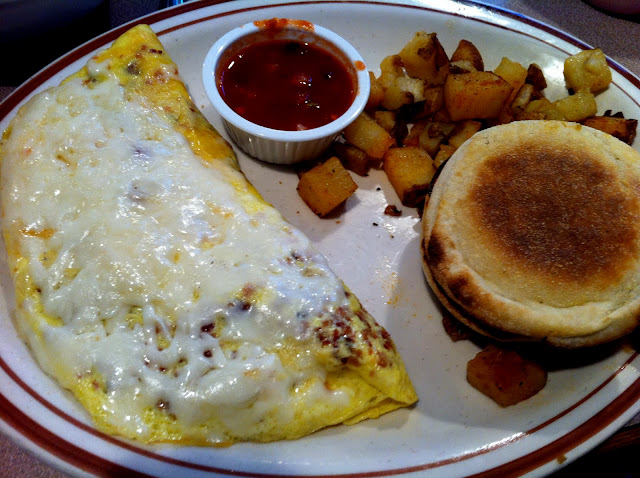 Dinner was at q, a barbecue restaurant that really sort of reminded me of this fantastic place I once tried in Stone Mountain, Georgia but have since forgotten the name of.  Decor wise, anyway.  I loved that when we sat down, they brought out baskets of house-made chips and pickles, which were fantastic.  Josh got the kobe beef brisket and macaroni and cheese, which was pretty good, while I got St. Louis style spare ribs and greens.  The ribs were good, not the best I’ve ever had at a restaurant (that’s currently an honor held by Satchel’s here in Ann Arbor), and the greens were passable and full of bacon.  It also came with slices of cornbread that were ginormous.  Still, I’m sad.  I can never find cornbread as good as I can make it. Why?  And don’t tell me it’s the lack of butter. 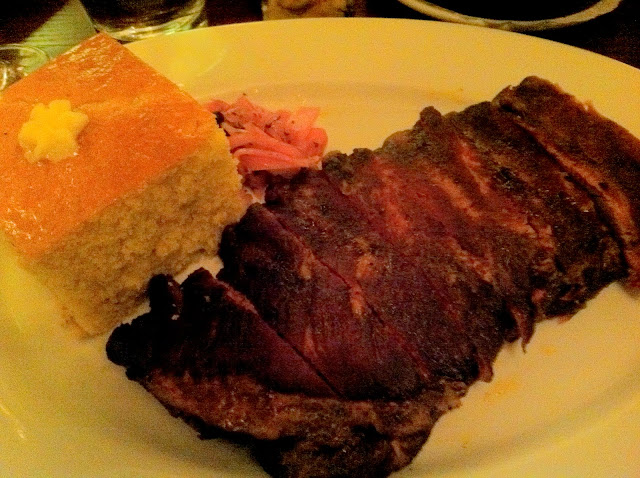 Tuesday’s dinner was at Pizzeria Due, which is basically owned by Uno’s.  I loved the ambiance, it was very out of the way and full of locals, and the waitress was laid back and fantastic.  The hot wings were also great.  The pizza, not so much.  I’m not a fan of Chicago style pizza most times anyway (sorry, Chicagoans) and the sauce was really lacking in flavor.  There was a good layer of sausage in the middle though.  That helped. We came back to town Wednesday afternoon, after our last Chicago eating stop–Yolk, which is probably my new favorite breakfast place there.  It was bright, sunny, laid back and had an amazing menu that I wish I’d had more time to explore.  I just had the simple bacon and eggs over easy, but what really caught my eye–though I couldn’t bring myself to eat it that early in the morning–was this French toast dish made of red velvet cake with cream cheese that was dipped in batter and fried and topped with whipped cream.  Like ohmygod.  I think I got diabetes just reading the description.  Someone please try it and tell me how it is.  Please. 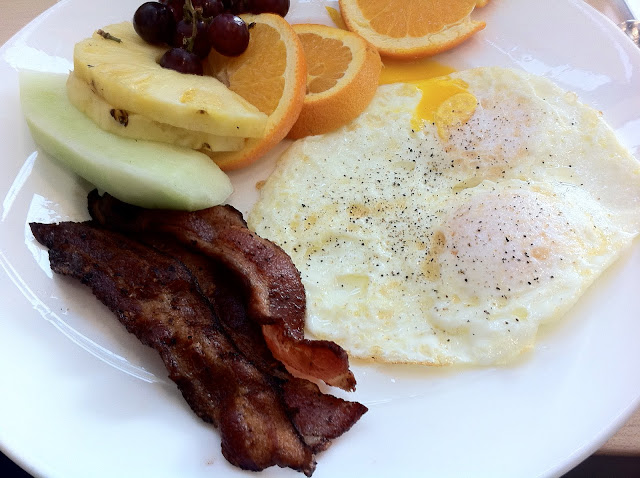 So that was the week.  Now we’re back and I’m glad we tried a few new things but so glad to be back in my own kitchen, too!  Eating out gets tiring after a while.  I did get some good ideas though, not the least of which is the pomegranate-vanilla curd that is currently cooling in the fridge.  But more on that later…