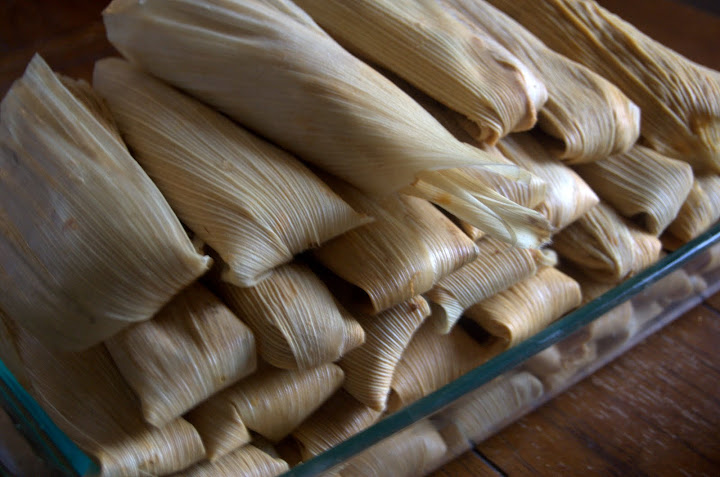 “Like awesome! Oh, wow!  Like totally freak me out.  I mean, right on!  Tamales sure are number one!”

Oh come on.  I know that every single one of you use cheers from Bring It On in your daily life.

But we have more important things to discuss than Kirsten Dunst’s witty, razor-sharp cheer-snark.  We have tamales.

This is going to be a long post.  If you need to use the bathroom, I suggest taking your laptop with you.

THIS GOT STARTED BECAUSE…

…I’m not really sure why.  At some point months ago, Chase and I were discussing tamales, probably as part of a larger discussion about Pilar’s tamale cart and street food in general.  We decided, “You know what?  We should totally make our own tamales sometime!”  It was just like that, only pretend we sound more sophisticated about it.  Flash forward to a short time later and I brought up the idea to Paul, who was like, “Yeah, I used to do that with my grandmother.”  Light bulb!  The three of us agreed, yes, we would have to do this.  We’d use Paul’s experience and his grandmother’s recipe and my kitchen and an entire Saturday and just get. it. done! 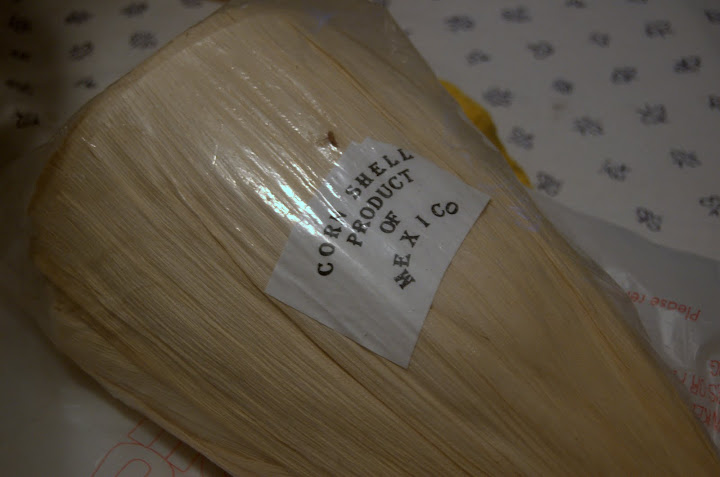 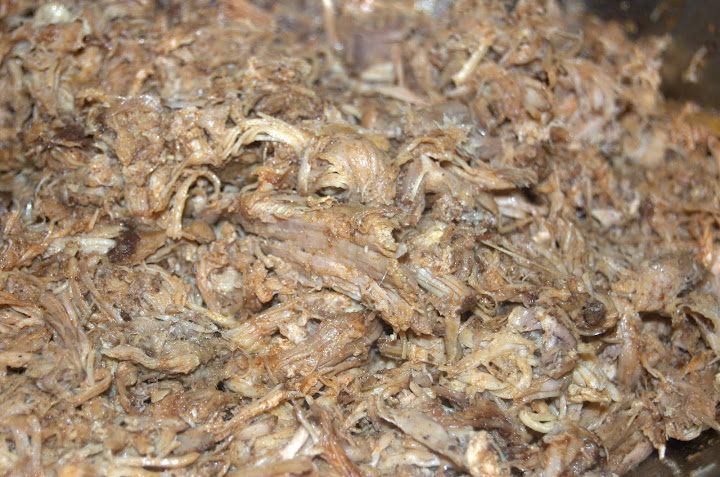 THREE WEEKS LATER
“Hey, isn’t TamaleFest this weekend?”
“Oh, s***, yeah!  We should probably get on that.  What do we need again?  Everything?”
FRIDAY 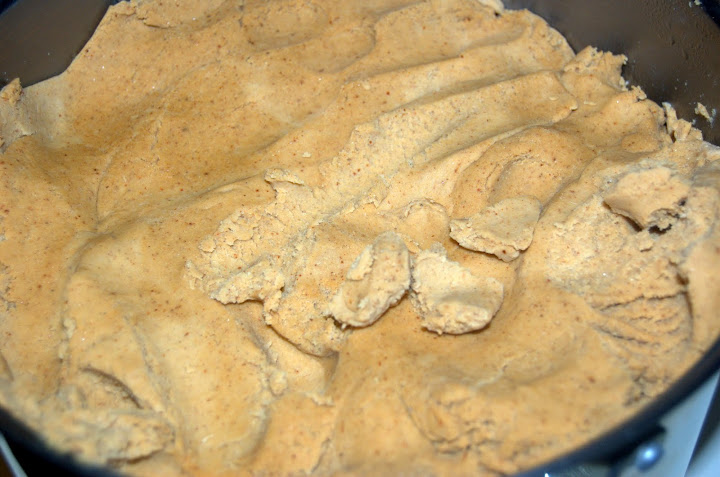 TamaleFest was going to be reasonably small—there were 6 of us involved.  I say “reasonably small” because our last food festival, BBQFest, in September, had about 40 attendees.  Paul was going to be the band director in the great tamale symphony, being the only one of us who actually knew what he was doing.  The rest of us–Chase, Brian, Rita, Josh and I– were there to work and learn. 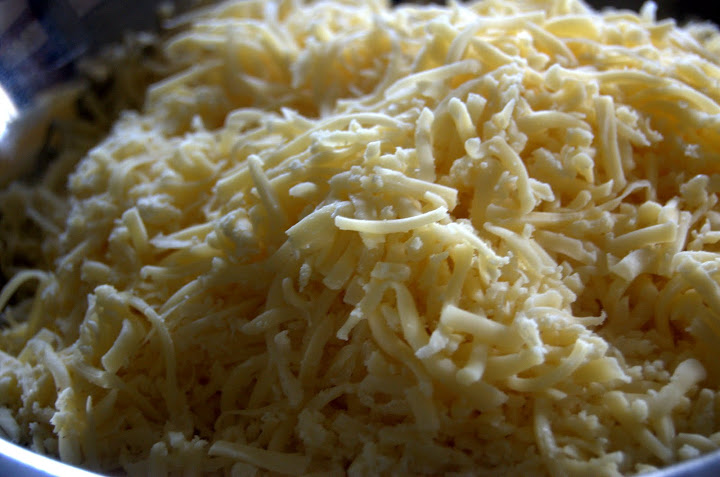 We’d decided we’d do two types of tamales: pork (because it’s easy to find pork shoulder for cheap at Costco and because it’s delicious), and bean and cheese (Paul’s a vegetarian).  If you’ve never made tamales before, they rather intensive and there’s a lot of components to put in place.  It really is a group effort and you  want to make a big batch to make all the effort worth it.  We split up the gathering of the essentials: 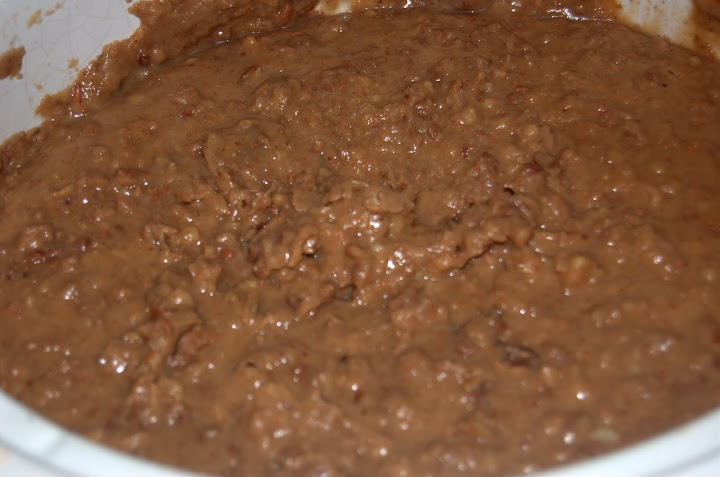 The pork cooked all day Friday (or all night, in Brian’s case), simmering slowly in a spice blend of ancho, hot chile powder, cumin, salt, pepper and cocoa.  Paul fried the beans, then slow-cooked them and we later added a blend of cumin, chile and ancho powder.  He also mixed several large pots worth of masa, which is the cornmeal mixture that wraps around the filling in a tamale (recipe below). 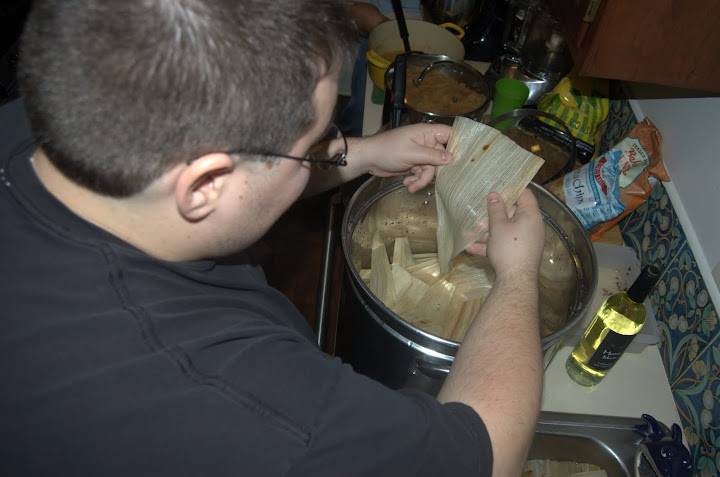 Paul got to our place bright and early, and we immediately….went out to breakfast.  At Beezy’s.  You should always eat breakfast, kids, it’s the most important meal of the day.  Then we got back to the house, let the masa and pork sit out and come up to room temperature and waited for everyone else to arrive.

So here’s what had to happen: 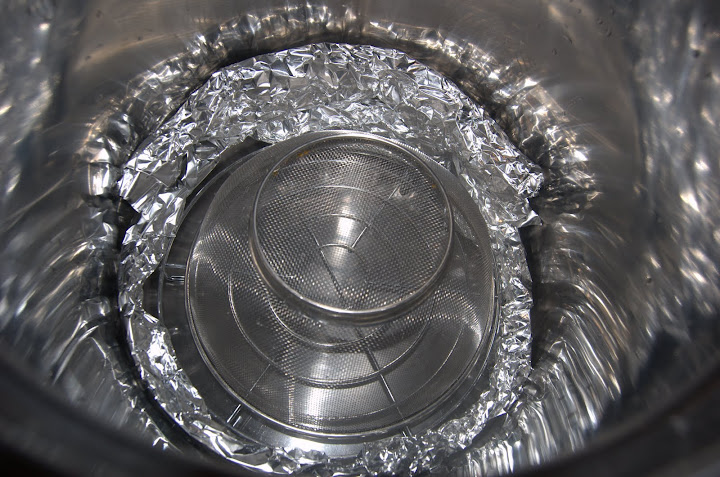 After getting everything ready for the first batch, which was gonna be pork, Paul gave us all a rundown of what had to happen and how to do it, including spreading the masa on the cornhusks, which isn’t the easiest thing in the world to do.  He also showed us how to properly fold a tamale and mentioned we shouldn’t bother trying to “tie” them because it was a lot of extra work and if they were folded and placed properly, it wouldn’t matter.  After that, we manned our stations.

Rita, Brian, Chase and Josh were “spreaders,” meaning they got out the just-soaked cornhusks, laid them flat on the table and spread a good cover of masa across the husk, which is the difficult, more time-consuming job as the masa is a bit hard to spread.  Then it went to me and Paul, who spooned in the filling, folded the tamales and placed them fold-down in the magnificent steamer scupture. 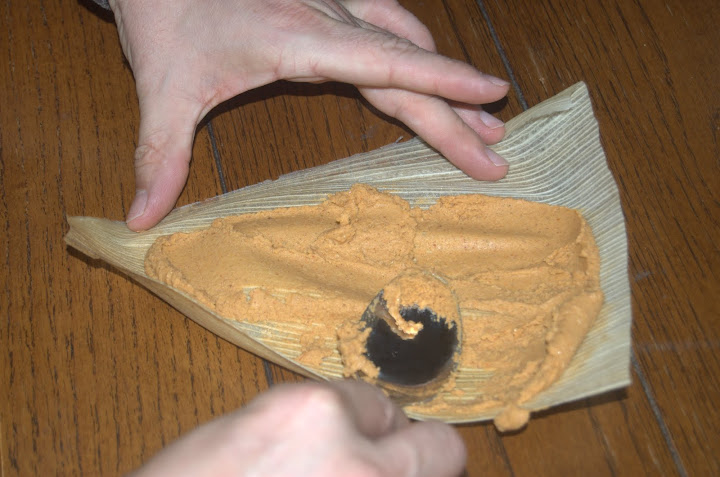 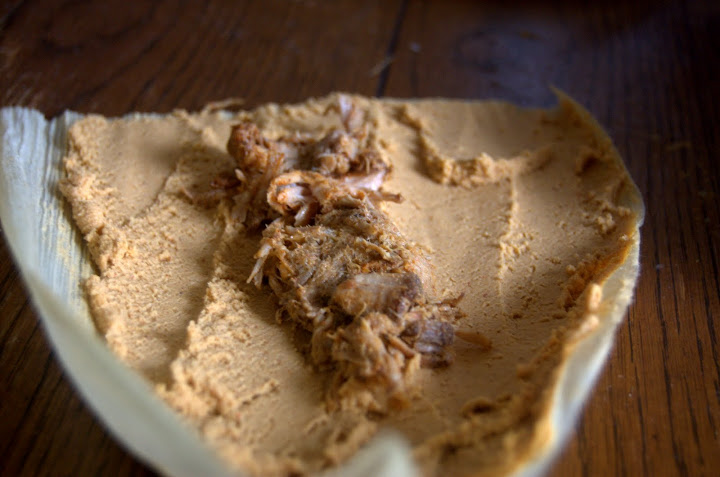 It was an interesting process.  Some corn husks were really big and needed to be cut down.  Some were too small to be useful.  The masa didn’t want to spread, or got stuck to the spoons, or your fingers.  We ate a lot of masa; it was really good and well spiced.  You had to figure out just how much pork to add in, how tightly to roll the tamale, how to keep them from falling over in the pot.  The average tamale is, I think, 3 or 4 ounces.  Ours were um….quite a bit bigger than that on average.  Maybe 5-7 ounces on average.  And then there was Big Bertha, Chase’s tamale, which weight in at a burrito-sized thirteen ounces.  No, seriously.  It was like the Arnold Schwarzenegger of tamales. 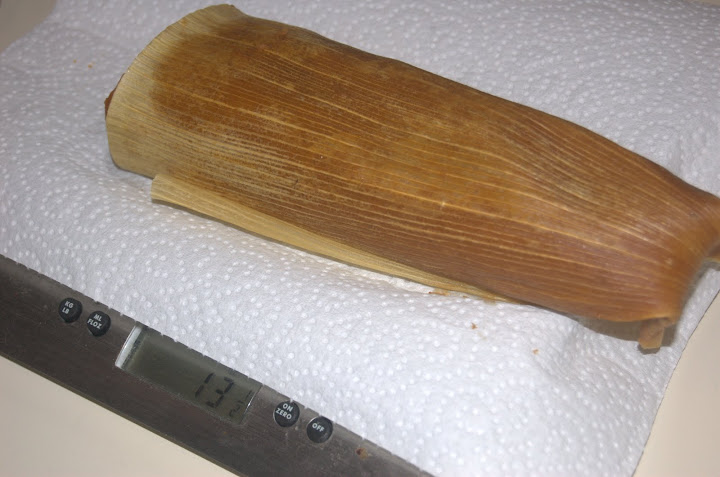 When we filled the pot, Josh and Paul carried it to the stove and, using a funnel, gingerly poured water into the bottom of the pan thanks to the tinfoil cylinder Josh had made.  Then the steaming began.  It took about 4 hours for that batch to properly steam, with Paul and Josh keeping an eye on it to make sure there was enough water in the pot.  When a batch finished, the tamales were pulled out of the pot with tongs, set aside to cool and bagged in freezer gallon bags, with the exception of a couple “test ones,” which we ate.

Then we took a break.  We watched an episode of Glee and drank homemade hot cocoa spiked with peppermint schnapps or coffee liqueur. Hey, gotta keep your strength up! 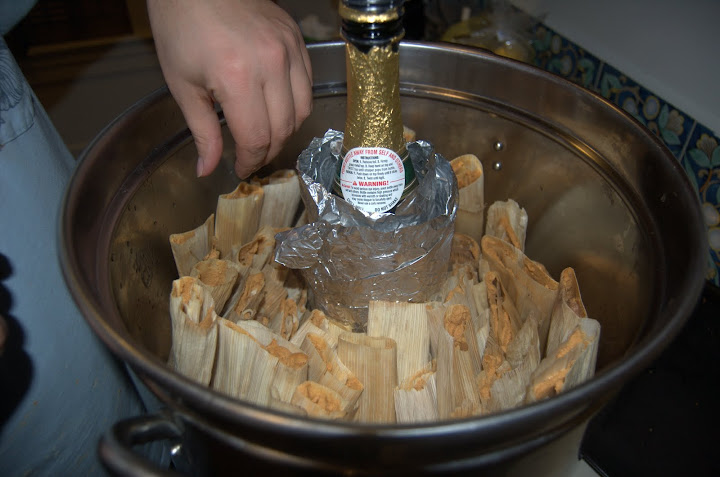 THE REST OF IT

While the pork tamales steamed, we repeated the same procedure for the bean ones.  All in all, we went through 3 bowls,  I think,  of masa, 10 pounds of meat, Lord knows how many beans, two pounds of cheese and two giant packs of corn husks, plus two rounds of mimosas, one round of spiked cocoa, one round of pizza and wine and fourteen hours later.

FOURTEEN HOURS!
And that was just from the time we started on Saturday to the time when we pulled the last bean tamale of out the pot.  Yeah, that’s right.  It took about 3-4 hours to steam each pot of tamales, and we did about 3 pots.  We ended up with just over 15 dozen tamales, hitting our target perfectly.  Of course, some of our tamales were really the size of 2 or 3 normal ones but hey…they were all delicious and that’s what matters. 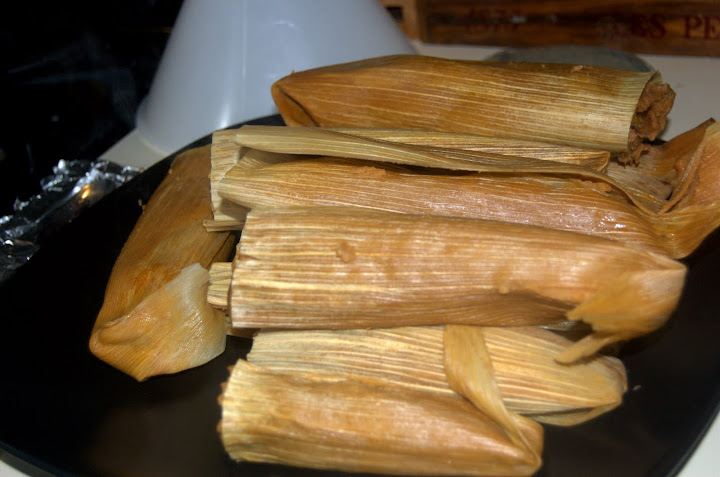 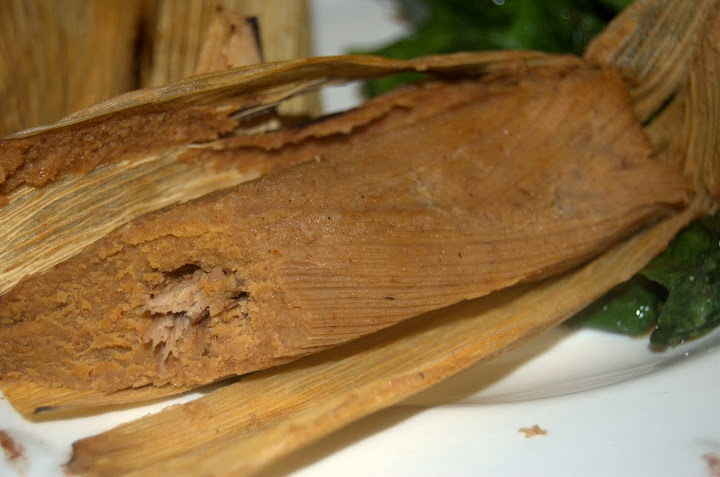 Now, to help you try it, I’ve compiled the following resources:

6 cups masa
5 cups warm water or chicken broth or Veg Stock or Pork Stock (also can use left over stock from your meat)
2 1/3 cups lard or shortening (2 2/3 Cup if using Veg stock or water)
1 tablespoon of backing power
Spice to taste with (or anything else you would like): onion powder, cumin, chile powder, salt

You can mix with a mixer, but it’s best to do it by hand.  Add more stock or masa to get the best consistency–should be similar to peanut butter.  If you store it overnight, add warm stock when you’re ready to get started and mix it again until you reach a good consistency.