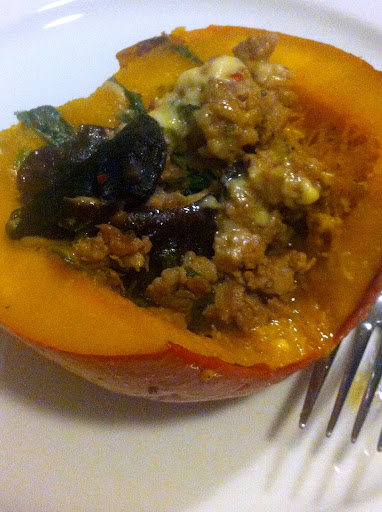 Ever since we got a couple of adorable little pie pumpkins in our farm share back in October, I’ve planned on making this dish.  Sure, it’s two months after that, but thanks to the wonders of living in a 150 year old brick house that doesn’t retain heat very well, the pumpkins were still good and ready to go.

Like most of my…life in general, I didn’t really have a plan, more a set of guidelines: fill pumpkin, bake.  I happened to have some hot Italian sausage I picked up from Steinhauser Farms at the Lunasa market a while back.  I thawed it out to use in a pasta dish earlier this week and wanted to use up the rest of it and this seemed like a good way to do that.  I also had some extra sharp white cheddar and thanks to a stocking-up trip to the store, I got mushrooms and arugula as well.  That’s it.  That’s all there is to this recipe–five main ingredients and some seasonings and olive oil.  You put it together, you let it do its thing in the oven and you have these adorable little self contained meals.

Not to mention, I think your taste buds are really the limit on the filling options here.  My next experiment I think is going to deconstruct this pasta I’ve made before–penne with pumpkin-gorgonzola sauce.  I loved it.  Josh wasn’t a fan, because he doesn’t like gorgonzola.  (Between you and me, I think that’s a bit nutty.  Josh, not the gorgonzola.)  I’m going to fill the pumpkin with pasta–maybe goat cheese ravioli or some small shaped pasta, I don’t know yet–and cream and some sort of creamy cheese (gorgonzola if Josh isn’t home, something else if he is). 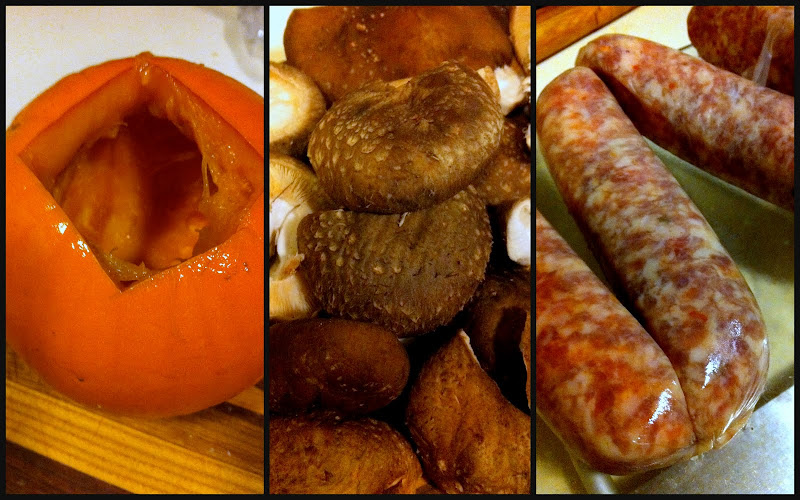 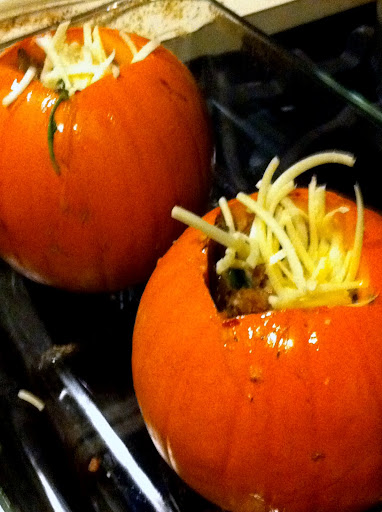 Speaking of Josh, the hilarious thing is that part of the reason I made this dish is because Josh likes pumpkin.  Well, no.  Josh likes pumpkin pie.  He doesn’t like pumpkin–or squash of any kind, really–unless it’s been coated with sugar.  He did like the dish, but he’d like it more if I had sprinkled brown sugar into the pumpkins before putting in the filling.  So keep that in mind if you have a fellow fickle eater in your home.  The rest of you, however, will probably love this dish as is.  It’s got everything you could want on a blustery winter night: spicy sausage, sauteed mushrooms, cheesy goodness in a soft pumpkiny bowl. 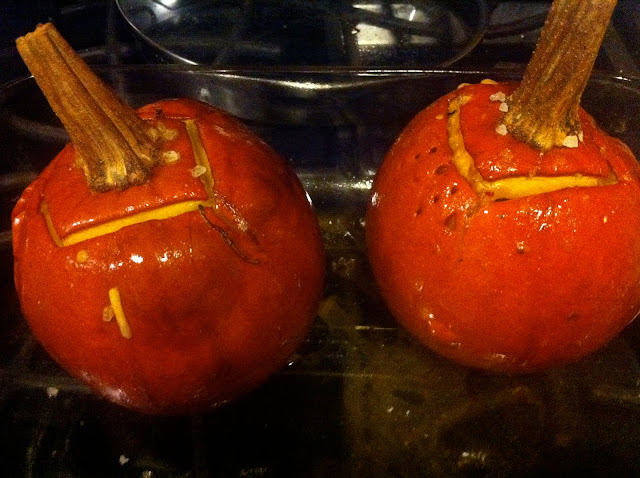 I made two pumpkins but Josh and I just split half of one and it was enough; the other went into the fridge for leftovers.  A hungrier person might want an entire pumpkin to themselves.  I think a half a mini pumpkin and a salad, maybe a little bread, is an excellent meal for a dinner party.  I mean, once you’ve made one of these, it’s pretty easy to scale.  You could also just stuff a larger pumpkin, cook it longer and then serve slices of it. 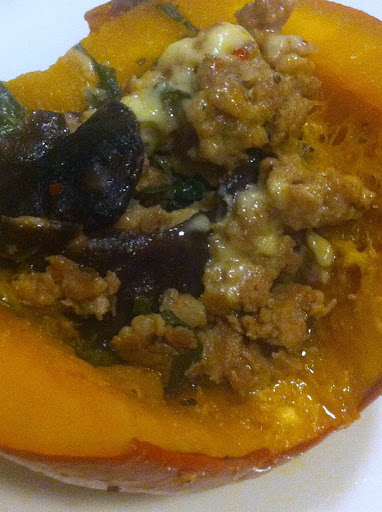 Cut the tops off the pumpkins, set aside, and remove the innards, scraping the inside walls to get rid of extra stringy guts.  Save the seeds for baked pumpkin seeds later.  Sprinkle the inside of the pumpkins with a bit of olive oil.

In a medium skillet, brown the sausage.  Add in the mushrooms and arugula, as well as any salt, pepper and herbs you’ll be using, and sauté until the mushrooms are softened.  Sprinkle in 3oz of the shredded cheese.

Split the stuffing between the two pumpkins.  Top each with half of the remaining ounce of cheese.  Put the tops back on the pumpkins, place in a casserole dish or on a cookie sheet and put in the oven.

Bake for 2 hours or until pumpkins are fork tender.  Let cool slightly and then slice and serve.

2 thoughts on “Baked Pumpkins: tasty meal in its own adorable bowl”