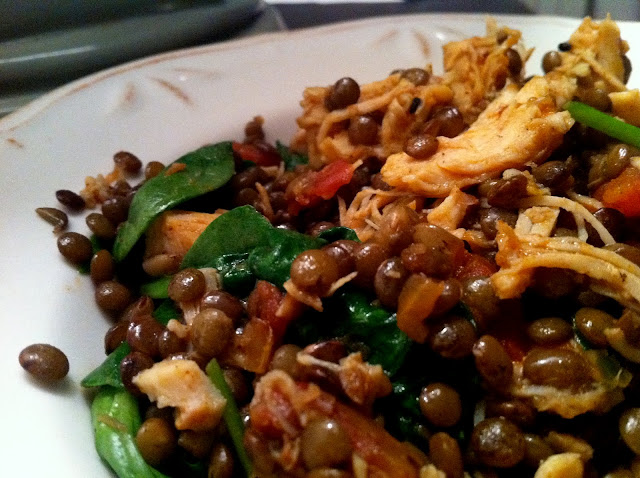 This may come as a shock to some of you, but sometimes I really just don’t want to cook.  Some nights it’s like, “You know, I just want someone to bring me delicious, reasonably healthy food and serve it to me.”  That never really happens though.  Generally when those nights come around, we end up ordering pizza, which ends up being reasonably tasty but not at all healthy, often takes longer than I want it to and then Josh and I have this discussion about what’s better, Jet’s or Cottage Inn (Cottage Inn) and don’t even get me started on the sadness that befalls us when we realize we’ve run out of our beloved chili pepper flakes to sprinkle over said pizza.  I mean, there’s teeth gnashing and wailing and crying…it’s terrible.

Days where it’s just me for dinner can be even worse.  I won’t order dinner out just for me.  Often I take the opportunity to experiment and make something that I know Josh won’t really like to eat but as stated above, sometimes I don’t want to spend an hour in the kitchen doing this or that.  Now, partially to combat cooking malaise like this, we bought a chest freezer last weekend so that we could buy frozen dinners and pull them out when necessary (well, the freezer is partially to store frozen dinners and partially to store large amounts of pork shoulder for when I feel like some slow cookin’).  This is slightly odd for me, because I don’t often eat packaged dinners, with the notable exception of occasional box of Kraft Mac & Cheese (it’s the best powdered cheese-product you can buy and you know it).  It got worse when, after purchasing the freezer and a few bulk packages of Lean Cuisine steamer dinners (thanks CostCo), I got home, ready to crack open and try out a meal of Orange Chicken and realized…we don’t have a microwave.

We haven’t had a microwave since we moved…last January.

Some people upon finding out that we don’t have a microwave are awed.  “How can you live?” they ask.  Biting back my natural inclination to provide a snarky retort about the inhalation of oxygen, the pumping of blood through the body and other biological processes, I just say, “It’s not really that hard, actually.”  Cause it’s not.  If I need to defrost something, it goes in a warm water bath (or gasp! I plan ahead and let it thaw in the fridge).  If I need to say, heat up some water or milk or melt butter, I do it on the stove.  If we eat at home (on a non-pizza night), we generally make most of our food from scratch or something close to scratch.  It doesn’t take that long and hey, you’ve read my recipes (right?  right?!), it’s not that hard.

It does, however, prevent me from resorting to one of those Lean Cuisines when I’m tired and on my own for dinner.  Or at least encourages me to find an oven-capable version which, this past week, I was clearly unprepared to do.  On the upside, I instead managed to make a delicious, healthy and quick dinner for myself–with leftovers for lunch the next day–using staples that I just keep in my pantry and fridge: canned chicken (which Josh won’t eat, but I take to work for lunch), spinach (my favorite green off all time, followed by arugula and collards), sriracha sauce (you could use any hot sauce, or omit it altogether) and a jar of Indian tomato relish from Trader Joe’s, which has tomatoes, tamarind and various spices in it.  It smells and tastes zesty and adds a lot of flavor with pretty much no effort on your part.  I combined all of those things with some petite French lentils and chicken stock.  And there you go. 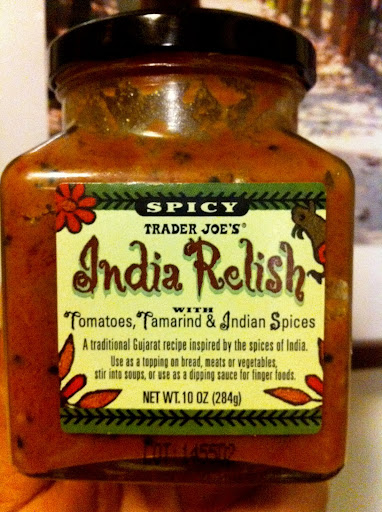 I’d actually never made lentils before which seems odd because I love lentils in Indian food, and Casey’s Tavern in Ann Arbor makes an awesome vegetarian “sloppy joe” with lentils, rice and beans.  But Josh isn’t a huge fan and I just never bothered to try them on my own.  Lentils, if you’re wondering, are what’s known as pulses, a legume that produces seeds inside of a pod and are high in protein and amino acids.  There’s a wide variety and they come in different colors.  French lentils, or puy lentils, are very small and green and a bit pricier than other lentils, but extremely tasty and still pretty economical–I bought them from a local bulk store, By the Pound.  Like rice or beans, they swell up when cooked and are very filling. 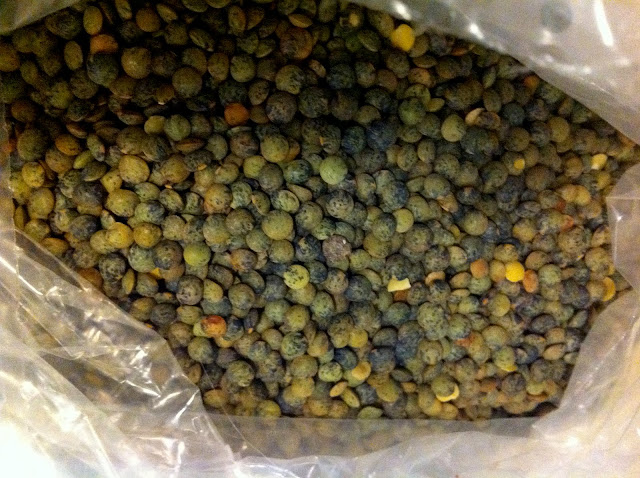 This dish, recipe below, was so easy that all I did was cook the lentils in the chicken stock (cooking anything in chicken stock automagically makes it better), drained them, then heated up the canned chicken in a pan, tossed in the lentils and spinach to wilt and stirred a couple spoonfuls of the relish.  My “active” time?  Like 5 minutes.  Took me a total of 35 minutes or so, most of which I admittedly spent playing piano.  Depending on the lentils you choose to use, your mileage may vary. 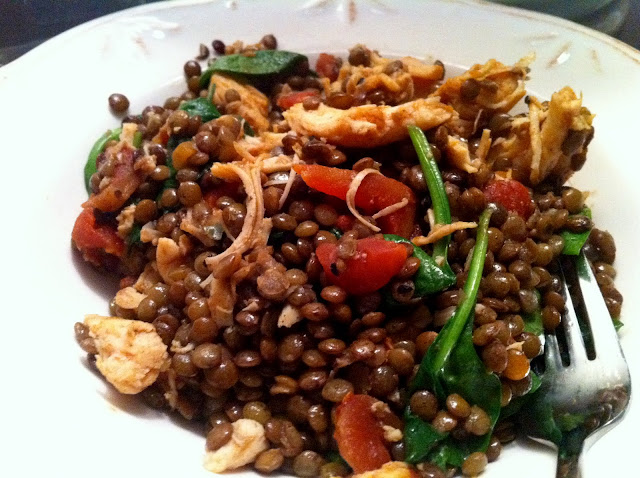 Chicken Lentil
*So good you’ll think the sky is falling.
*Ok, that was kind of lame.

3/4 c. French lentils (or any kind you like), sorted and any debris or stones removed
3 c. low sodium chicken stock (or veggie stock)–or enough to cover the lentils with an extra inch or so of room
1 7oz canned chicken
2 c. fresh baby spinach
2 tbsp tomato relish, or to taste
1 tsp black pepper
sriracha or other sauce, to taste

Cook the lentils.  Seriously, you don’t want to eat them raw.  Cooking times will vary by lentil type and whatever you add to the water.  Salt and acidic items should be added at the end of the cooking time.  I combined the low-sodium chicken stock and lentils in a medium saucepan and simmered over  a medium flame and it took about 30 minutes for the lentils to get soft.  When lentils are done, drain any excess liquid.

Drain chicken and toss in a pan over medium heat.  Add in tomato relish and spinach and cook for about 4-5 minutes, warming the chicken, wilting the spinach and letting everything mingle.  Pour in lentils, sriracha and black pepper and stir to combine.  Let cook together 2 minutes more.  Pour into a bowl and eat.  Yum.