I know the term foodie is, to put it mildly, contentious for some people but let’s put that aside for now.  The word we’re going to focus on today is mobile.  I’m very in to “mobile” this year, both in my personal and professional lives.  Back in May, I bought an iPad and now I feel all space-agey.  I also got the iPhone4 which has been fun and, dare I say it, useful.  And before you close the window and write me off as an Apple fangirl (I might be a little bit, I admit it, but in my defense, I was also a film major so clearly I’m a bit odd) who just likes to drop ridiculous amounts of money on shiny things (I like shiny, but I don’t really like spendy), I should also note that I use these things almost as much for work as I do for everything else.  Keeping up on things like the newest gadgets and toys is part of my actual job–as in, someone really does pay me to do that.  I also specialize in online, collaborative, social environments and tools like blogs, wikis, concept mapping apps, word processing suites, social networking sites, even…*gasp…Twitter.  Yes, that’s right.  And I enjoy doing this sort of thing because…well, it’s fun, informative, varied, and we actually apply them to good use in a variety of courses and projects that the university where I work.  But lucky for me, I’ve found that my exploration of these things doesn’t just benefit my work projects and my checking account (although I am very glad to be earning a paycheck, and one that does not have the Starbucks logo on it–I mean, I was a film major, after all).  My exploration also benefits my hobbies.  Well, hobby.  Let’s be honest.  There’s only really one.  And it’s food.

The internet really spurred on my love for, knowledge of and connection to food.  Like a lot of people, once upon a time I discovered Epicurious.com, CookingLight and All Recipes and went crazy over the waterfall of delicious recipes and the growing communities surrounding them.  I still visit all those sites, of course, and several others like them, but much like all things intar-webby, the tools that I use now to learn about and participate in the cornucopia (ha!  Fall food reference!) of  online food resources and communities have expanded, grown and are, frankly, becoming legion.  Thus, I decided that instead of a recipe and an engaging dialogue about making said recipe, enthralling you all with my wit and poise, I would write a three-part blog post to share some of the things that make it possible for me to obsess about share my love of food and stalk interact with other food geeks anywhere I am…that receives cell signal.  Brief note: this will not work for anyone using an AT&T phone near a glacier.  I know.  I’ve tried.

Less brief note: What is being a mobile foodie about anyway?  Mobile foodiism?  Is foodiism a word?  Spell-check doesn’t think so.  But spell check doesn’t eat either.  For me, being a mobile foodie is about utilizing new technology such as hand-held web-enabled devices, software applications and the internet as a whole to research, catalog, shop, discuss, share and encounter markets, restaurants, cooking tips, dining experiences and food in general as cultural force…wherever I happen to be at any given moment.

I apologize in advance to you Blackberry, Android and Windows Mobile phone users.  I’m sorry that you have to use those products.  Just kidding!  I’m sorry because I’m not nearly as proficient in applications for those particular devices, since I have and work on an iPhone, iPad and Mac computer. However, many of the things I use and will mention work on multiple platforms, so be strong!  You have a good slice of this technolo-berry pie we’re about to dig in to.

Mobile Foodie: Part One–Mobile Apps
So let’s start with the little guy, my phone.  I’ve had an iPhone for about three years.  Didn’t think I wanted/needed a smartphone until I had one and now I’m like “OMG!  Can’t…live….without!” But if it makes you feel any better about me, that’s also how I feel about Calder’s butter.  My phone’s name is Goomba II, Goomba I being my old iPhone 3G that I gave to my mother.  I think it’s important to name your technology appropriately and what’s more appropriate than a Super Mario Bros. reference?  A Mel Brooks one.  But I digress.

The one thing I use on my phone more than anything else when it comes to food?  The camera.  Yes, I am one of those people who takes pictures of their food in restaurants and at home.  In my defense, I’m a food blogger.  I write about food.  And who likes to read about food when there’s no pictures?  Nobody.  That’s who.  And not “nobody” in the “somebody” kind of way like in the Shel Silverstein poem.  Seriously, nobody.  But also, I’m visually stimulated by pictures of food and I like to go back later and look at where I’ve been, gastronomically speaking.  So yes, I photograph my food.  I also photograph the insides of restaurants and the farmer’s market.  For this I use either the regular camera app on the iPhone or CameraPlus (links go to the App Store), which is a third-party app that gives you more freedom to crop and edit photos.  PhotoWall is also useful if you want to edit photos further and create collages to send to people.  If you take a lot of video of say, cooking demos, your own cooking process or just anything at all, there’s also iMovie available on the phone as well.  Crazy. 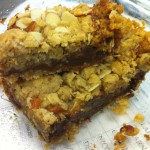 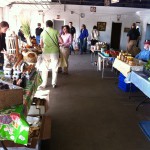 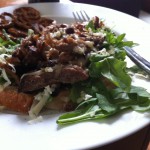 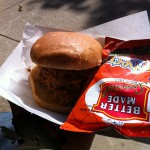 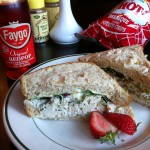 Now, what do I do with those pictures?  Often they go into my Twitter feed thanks to Tweetdeck or lately, the Twitter app.  Sometimes into Facebook.  I generally reserve Facebook for people I actually know—as in, I generally only friend friends.  I also use it to keep up on news from local businesses I frequent, like Beezy’s, Needle Lane Farm, the Michigan Theater, or groups like Transition Ypsi.  I follow some of those on Twitter as well, but often use Twitter more for quick news and especially for updates from food-lovers and businesses all over the world.  I even made a list especially for them—my Foodies Twitter list.

Sometimes, if the pics are good enough, they make it into a blog post (like some of the ones above).  I’ve gone a bit mobile with my blog, too.  If you use WordPress, they have a mobile app where you can update your blog from your phone.  Me, I host my own blog and I’ve made that sort of mobile, too—from your end.  I used WPTouch, a WordPress plugin, to make a mobile-friendly version of Have Fork, Will Eat.  So you can read me anywhere!  Except on a glacier in Alaska.

There’s other things I do with my phone, too.  I keep my grocery lists with GroceryIQ, which I love because it allows me to not only put in the items I need to buy, but assign them to stores, put in the costs and even use the phone’s camera to snap a picture of an item’s UPC code to automatically add it to my list.  Love that.  If I’m out and about and looking for a place to eat lunch, I rely on Urbanspoon or Around Me to tell me what’s local and what’s good.

And, most importantly, what about cooking? My third favorite app for that is the Epicurious app, which makes it super easy to find new recipes and create shopping lists.  My second favorite is Kitchen Helper, which tells you all the possible substitutions for dozens and dozens of ingredients.  And my absolute favorite iPhone app for absolutely anything but especially cooking?  Evernote, of course.  I’ve mentioned it numerous times before.  At this point, I’m an evangelist.  I mean, it’s got my entire cookbook (well, 756 recipes of it).

Let’s move on to the big brother: the iPad.  His name is Toad.  Short for Toadstool.  Cough.  Super Mario Brothers.  And I have a lot of the apps mentioned above on Toad too, but also a few other, iPad-specific ones…

…Such as the StumbleUpon app.  I love StumbleUpon; it’s one of my favorite ways to find new recipes.  In edition to using the iPad versions of Epicurious and Evernote also (which I truly love—when I’m cooking, 99% of the time my iPad is propped up on the counter, iPod playing, Evernote open to whatever recipe I’m (maybe) using), I like Food & Wine‘s iPad app, which is brand-spanking-new.  You can purchase and download issues of the magazine (first one’s free!) and it’s more interactive than the lame, PDF versions of some other magazines.  I’m waiting for others to hop on this iPad magazine app bandwagon…you know, without sucking at it.  I also use Atomic Web Browser, which is also available on the phone, because it can pull it my bookmarks from my computer (I use Firefox) and it can mimic most other browsers so I get regular webpages instead of being relegated to a mobile page of a website.  But most importantly, it’s got great bookmarking features and other add-ins so I can surf my favorite food sites no problem.

And blogs?  I read a lot of other food blogs.  On my computer, I generally peruse them via Google Reader.  On my iPad, I connect using Early Edition, which is an RSS reader that mimics a newspaper (getting almost quaint these days) and can pull in feeds from lots of sources, including all the ones I already subscribe to with my Google account.  And for those occasional free web-zines, e-books and e-pamphlets (like my pamphlet on foodie skin care!), I sometimes use Good Reader, so I can save, read and even mark-up recipe PDFs I find online.  Oh and cookbooks?  iBooks. Pretty good selection!  I also use it to download a few gastronomical titles like the Sex Life of Food to keep myself busy on vacation–and I can create bookmarks and comments on the pages.

But Lauren! you say.  What about other resources?  What about other things that aren’t iPhone apps?  Well…you’ll just have to stay tuned for Part Two for that…for now, go, dear internet.  Be fruitful and multitask.

And if you have any good mobile apps or tips…pass them on!