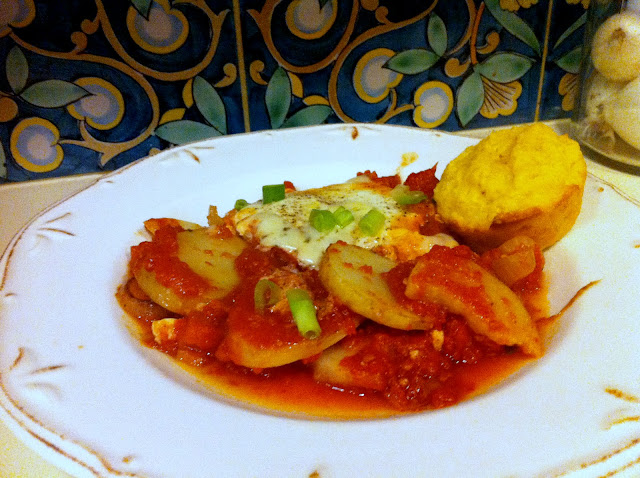 When I was a little kid, my grandparents raised chickens.  I remember helping my grandma feed them and having to collect the eggs.  I remember the rooster strutting around and generally being absolutely nothing like Foghorn Legorn.  But mostly I remember them all chasing me around the yard.

But they do produce tasty, tasty eggs.  And I’ll admit that deep down I always hope that I’ll someday get to raise some chickens in my backyard that will be as awesome as Billina, the talking chicken from Return to Oz or even Chicken Boo from the Animaniacs.  That silly Chicken Boo.  He thinks he’s people.  But mostly, I really just like eggs.

Unlike other breakfast foods, which are often greasy or absolutely bursting with sugar which is not a good way for me to start off the morning, eggs are just complete little packages of deliciousness.  I like them scrambled, fried for sandwiches, hardboiled, deviled, baked with herbs and olive oil, and occasionally I like to go all out on the weekend and I very slowly scramble them over low heat for about 10-15 minutes with olive oil, butter, a touch of cream and shavings of my favorite flavored Monterey Jack cheese.  That last one, by the way, is deadly but delicious.  Eat lovingly but sparingly.

But I also like to make Eggs in Purgatory, which is basically eggs cooked in spicy tomato sauce.  One of my favorite egg breakfasts.  And you know what breakfast is really good for?  Dinner.  END_OF_DOCUMENT_TOKEN_TO_BE_REPLACED

I know the term foodie is, to put it mildly, contentious for some people but let’s put that aside for now.  The word we’re going to focus on today is mobile.  I’m very in to “mobile” this year, both in my personal and professional lives.  Back in May, I bought an iPad and now I feel all space-agey.  I also got the iPhone4 which has been fun and, dare I say it, useful.  And before you close the window and write me off as an Apple fangirl (I might be a little bit, I admit it, but in my defense, I was also a film major so clearly I’m a bit odd) who just likes to drop ridiculous amounts of money on shiny things (I like shiny, but I don’t really like spendy), I should also note that I use these things almost as much for work as I do for everything else.  Keeping up on things like the newest gadgets and toys is part of my actual job–as in, someone really does pay me to do that.  I also specialize in online, collaborative, social environments and tools like blogs, wikis, concept mapping apps, word processing suites, social networking sites, even…*gasp…Twitter.  Yes, that’s right.  And I enjoy doing this sort of thing because…well, it’s fun, informative, varied, and we actually apply them to good use in a variety of courses and projects that the university where I work.  But lucky for me, I’ve found that my exploration of these things doesn’t just benefit my work projects and my checking account (although I am very glad to be earning a paycheck, and one that does not have the Starbucks logo on it–I mean, I was a film major, after all).  My exploration also benefits my hobbies.  Well, hobby.  Let’s be honest.  There’s only really one.  And it’s food.

The internet really spurred on my love for, knowledge of and connection to food.  Like a lot of people, once upon a time I discovered Epicurious.com, CookingLight and All Recipes and went crazy over the waterfall of delicious recipes and the growing communities surrounding them.  I still visit all those sites, of course, and several others like them, but much like all things intar-webby, the tools that I use now to learn about and participate in the cornucopia (ha!  Fall food reference!) of  online food resources and communities have expanded, grown and are, frankly, becoming legion.  Thus, I decided that instead of a recipe and an engaging dialogue about making said recipe, enthralling you all with my wit and poise, I would write a three-part blog post to share some of the things that make it possible for me to obsess about share my love of food and stalk interact with other food geeks anywhere I am…that receives cell signal.  Brief note: this will not work for anyone using an AT&T phone near a glacier.  I know.  I’ve tried.

Less brief note: What is being a mobile foodie about anyway?  Mobile foodiism?  Is foodiism a word?  Spell-check doesn’t think so.  But spell check doesn’t eat either.  For me, being a mobile foodie is about utilizing new technology such as hand-held web-enabled devices, software applications and the internet as a whole to research, catalog, shop, discuss, share and encounter markets, restaurants, cooking tips, dining experiences and food in general as cultural force…wherever I happen to be at any given moment. END_OF_DOCUMENT_TOKEN_TO_BE_REPLACED 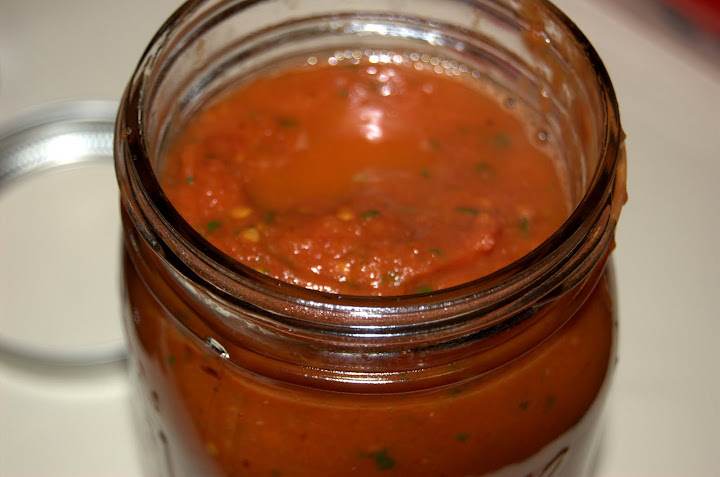 First, Josh and I had breakfast with my friend Jessica and her mom at Beezy’s in Ypsilanti, which is my favorite restaurant in the entire city, I’m pretty sure.  We stopped at the Depot Town Farmer’s Market to do a bit of shopping and to pick up our farm share with Needle Lane Farm.  I love this share so much.  It’s ending soon and I know from last year, I’m going to miss it so much over the winter.  Plus, I love the people at the farm, so I’ll miss seeing them.  But anyway, we picked up our share and got some good peppers and cabbage and beans and a big bag of tomatoes.  Remember that, because it’s going to come up again later.  And you will be tested.   Anyway, after the market, we wandered up to Beezy’s for some delicious breakfast food with which to celebrate Jessica’s passing out on the bar…exam.  (Love you, Jess :-))  I am convinced that Beezy’s has the best breakfast sandwiches in Washtenaw County at the very least.  I got the breakfast eggel—-asiago bagel with scrambled eggs, ham and provolone cheese.  And a hot chocolate.  Which, by the way, was not a cup of hot water or milk with powdered mix thrown in.  Or syrup.  Oh no.  This was Calder Dairy chocolate milk that was steamed and frothed.  It was amazing.  I live three blocks from Beezy’s.  I think it’s safe to say that if you can’t find me this winter, it’s because I’m down there, face-down in a cup of their hot chocolate, trying to make it through the winter. END_OF_DOCUMENT_TOKEN_TO_BE_REPLACED

I put my hand up on a chip
When I dip, you dip, we dip
You pick up a pita chip
When you dip, I dip, we dip
Apparently October is Vegetarian Awareness Month, according to the Bureau of Randomly Assigned Issue Awareness Months, and October 1 was World Vegetarian Day.  I wouldn’t normally know this, no offense to vegetarianism, except that a group of us at my office were looking for a theme for the beginning of our semi-regular Friday potluck lunches this semester and we stumbled upon this little factoid.  We figured hey, we have a few vegetarians and vegans on staff and, after all, we are planning on celebrating Miss Piggy’s birthday with a ham-fueled pork-gy in a couple of weeks, so why not?  Veggie day was on.

I needed something to make and wanted something simple, that could feed a lot of people but without a lot of effort on my part and this recipe I had tucked away for an 8 layer Mediterranean dip did just the trick.  I got the recipe from Whole Food’s website, but ended up tweaking it a bit because I didn’t want certain layers, wanted to add others and in one case couldn’t find the ingredients for one so I mixed things up.

That’s the beauty of this recipe–it’s infinitely customizable.  And not to get all Sandra Lee on you, but it’s great for those of you who don’t want to make something from scratch because all you have to do is layer and assemble.  Layer and assemble.  And eat.

The original recipe is here, but my modifications are below:

Layer first hummus, then spinach, then artichokes and tomatoes.
Spread yogurt over the veggies and then top with feta.  Eat.  With
pita chips.

What are you doing for Vegetarian Awareness Month? 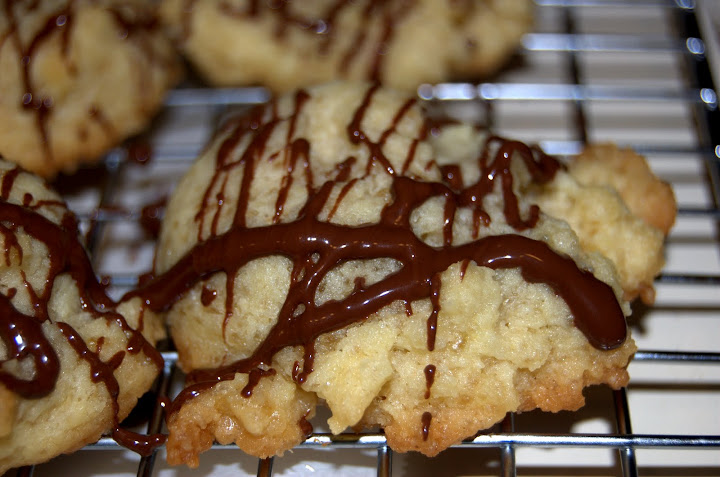 As I’ve probably mentioned before, I tend to bake when I get restless.  Judging from most of my blog entries, I get restless a lot.  But there’s also the fact that I like to have a little something sweet in the evenings and instead of opting for a couple cookies made by some questionable elven folk, I prefer to satisfy my sweet tooth with a couple small creations of my own.  One, because as we established, I’m already restless and it’s something to do, and two, because I’m very much in a place where I prefer to know exactly what’s in my food and to eat food that’s…well, recognizable and pronounceable.

So the other night, I had one of these moments.  A little voice in my head said, “Bake something,” which I figure is better than a little voice in my head telling me to “burn things.”  Hopefully, anyway.  And after looking through my pantry, which is getting a little low on things–like eggs–, and then flipping through my Evernote cookbook, I finally settled on a classic: sugar cookies.

Like I said in the grilled cheese sandwich post, Fall totally revs up my need for comforting foods and sugar cookies are one of them.  While chocolate chip cookies are my absolute no-exceptions favorite cookie of all time, sugar cookies hold a special spot.  When I was a kid, my mom used to make sugar cookies at Christmas and I would help…so that I could steal bits of the raw dough and eat them while watching my sister play Super Mario Bros.  The 80s were a magical time indeed.  So I love them because of that memory but to be honest, I don’t like to bake them often because one, they often require a lot more time and rolling and whatnot and two, they don’t have chocolate on them.

Well this recipe addresses both of those points.  Both. END_OF_DOCUMENT_TOKEN_TO_BE_REPLACED