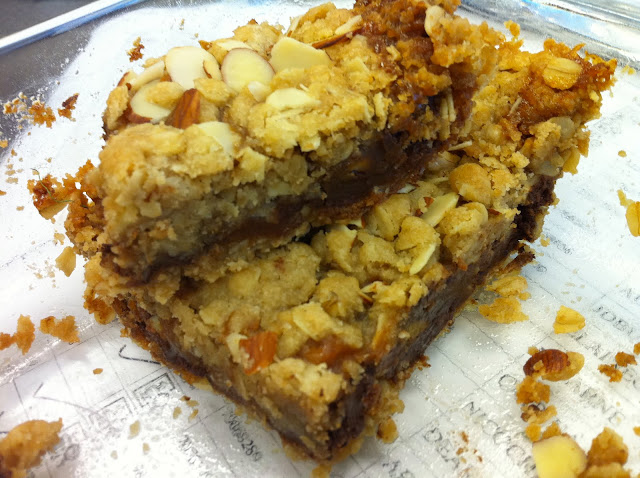 If I were a Bond girl, my cheeky code name would be Cara.  Cara Mel.  I’d make sly, sultry comments to Bond while carelessly smoking a long, elegant cigarette that won’t have the chance to kill me because I’ll die in a freak accident by getting a mounted sword-fish nose through the stomach while Bond escapes the clutches of some comical, balding, verbose and vaguely effeminate bad guy yet again.  “Cara Mel burns when hot, Mr. Bond,” I would say.  “Cara Mel lies,” he would reply blithely, the line coming out very suavely if he was Sean Connery, and not nearly as impressively if he was say, Roger Dalton.  Sorry, Rog.  But it’s true.

Of course my action-packed, sugar-fueled day dreams are only tangentially related to post, at point (Caramel, Bar).  Mostly because I’m tired and I get weird when I’m tired, and also because I can’t think of any other way to introduce this recipe other than to say it’s so good that Josh made me take the pan to work so that he wouldn’t eat the entire thing himself.  So there you go.  Bond tested, Josh approved.

No, really, these bars are quite good.  And really easy too.  And of course, I still had about 1.5 of caramel leftover from making the Take Five bars.  I used half of it for this recipe and the other half I melted into a pan of these brownies.  So yes.  I’ve had a lot of sugar this week.  Enough to kill a lesser mortal.  Okay, maybe not kill.  Stun?  Make giddy?  Give cavities?  There it is. 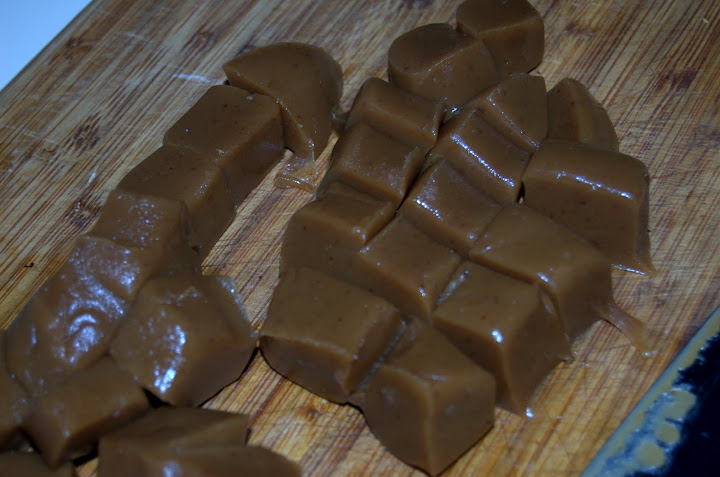 Anyway, I made my usual adjustments to this recipe.  I used my own caramel, for one thing.  I used dark chocolate chips for another.  I used sliced almonds instead of walnuts, and I used an 8×8 pan because to be honest, I have no freaking clue how they spread the oat mixture out to fit a 9×13.  I tried.  And failed.  And used an 8×8 pan.  This happens to me a lot; I don’t know why.  But it made a fabulous set of bars in an 8×8 pan.  I’ll post the original recipe, though, and you can do what you want with it.  Protip: Awesome with a scoop of vanilla ice cream.  Trust me.  Would I lie to you?  I mean, about food.  Not all that other stuff. 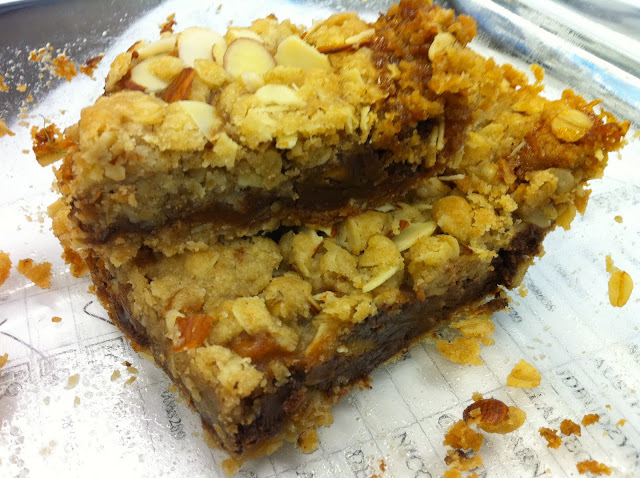 1. Preheat oven to 350 degrees. In a medium saucepan over low heat, melt together the caramels and heavy cream, stirring occasionally until smooth.
2. In a medium bowl, stir together the flour, oats, brown sugar, baking soda and salt. Stir in the melted butter until well blended. Press Half of the mixture into the bottom of a 9×13 inch baking pan. Reserve the rest.
3. Bake the crust for 8 minutes in the preheated oven. Remove and sprinkle with chocolate chips and walnuts. Pour the caramel mixture over the top and then crumble the remaining crust mixture over everything.
4. Return to the oven and bake for an additional 12 minutes, or until the top is lightly toasted. Cut into squares while it is still warm.