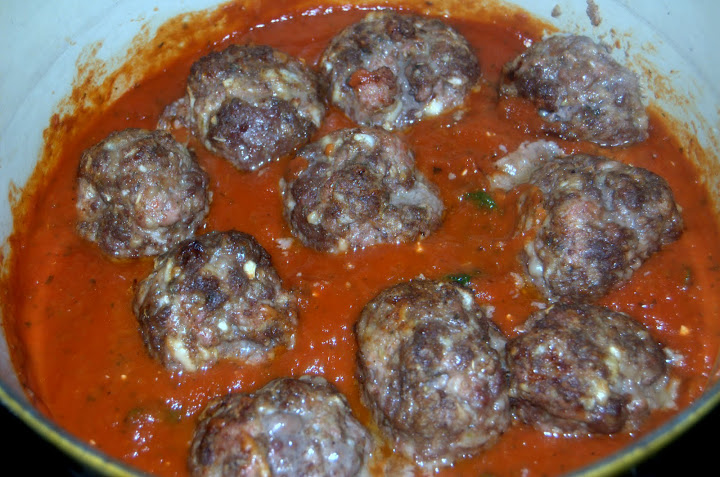 This week has been a massive failure, culinarily speaking.  I think I ate out half the week, with the exception of last night, when Josh made Kraft Mac for us for dinner because I was too lightheaded to do anything but fall asleep after a very long day at work during which I ran around a lot and only actually ate one chocolate-banana smoothie and four homemade oreos.

These meatballs were the one gastronomical high point of my week, and that’s sad.  The meatballs aren’t sad; they’re fantastic.  What’s sad is that I have yet to follow them up with anything as delicious.  To make it up to you, and to my poor, poor belly, I think I will make some barbecue this weekend and post all the mouth-watering photos that I can.  That’s my gift to you.  Or it will be.  If I do it.

Anyway, I can’t really remember but I’m pretty sure I made these on Monday, before my week went completely to crap.  I really love meatballs.  I’m intrigued by them.  Not the “Why the hell would you do that?” kind of fascination that I have with meatloaf, oddly enough, but a simple curious adoration (I’ll do anything for meatballs but I won’t do that?).  In fact, if you recall, my previous iteration of this blog was chickenmeatballs.wordpress.com.  It’s one of my food goals to master the art of meatball making (along with icing, pulled pork, chocolate turtles, pancakes, biscuits and a few thousand other things—luckily, I think I’ve got the chocolate chip cookie down).  Well, this week I think I moved a tiny bit closer to my goal of meatball perfection. 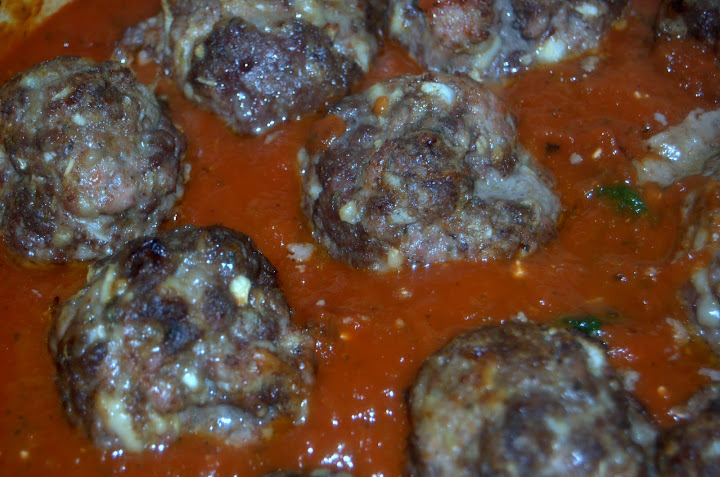 I really wanted to make meatballs on Monday. I don’t know why.  But I was driven to.  The planets were in alignment.  They are shaped like giant meatballs!  Clearly a sign.  Clearly.  So the problem I usually have with meatballs is the consistency–mine often fall apart and I use mostly beef or chicken and they’re ok but it usually ends up being more of a meat sauce than a meat ball. More of a gathering and less of a par-tay.  And while I had ground beef and pork on hand this time, and I thought ahead and grated my onions and garlic in the food processor and I had an egg and all this stuff, I lacked something to hold everything together and absorb the extra grease.  Usually recipes call for breadcrumbs or crackers or something.  I didn’t have any of those.  But I figured I’d try something else, something that I knew was a common thickening agent in Indian food (and I knew this because I’m currently reading a book on the evolution of Indian food that I will write about later, when I’ve finished this last chapter–fabulous book though) and it mentions that ground almonds are commonly used to thicken up dishes.

I didn’t have any almonds.

I did have pecans though, because I made another batch of turtles this last week.

The devil you say!

What’s that you say?

Indeed, I ground up a half cup of pecans and added that to my meatball mixture.  And it seemed to work.  They took shape nicely, they held together, the flavor was great–the pecans were barely noticeable but still gave it a bit of something.  I mean, clearly this needs to be tested again (and again and again until I’m full) but this first time worked out beautifully.

Doing all that, I was too lazy to then make sauce from scratch (well, not too lazy, but I didn’t have any tomatoes to use) so I decided to jazz up my favorite canned sauce by adding some spinach, some cream cheese and roasted some poblano peppers in the oven at 400F for about 25 minutes until blistered, peeling and seeding them and then pureeing them in the processor and adding them to the sauce.  Gave the sauce delicious tang.  Two forks up. 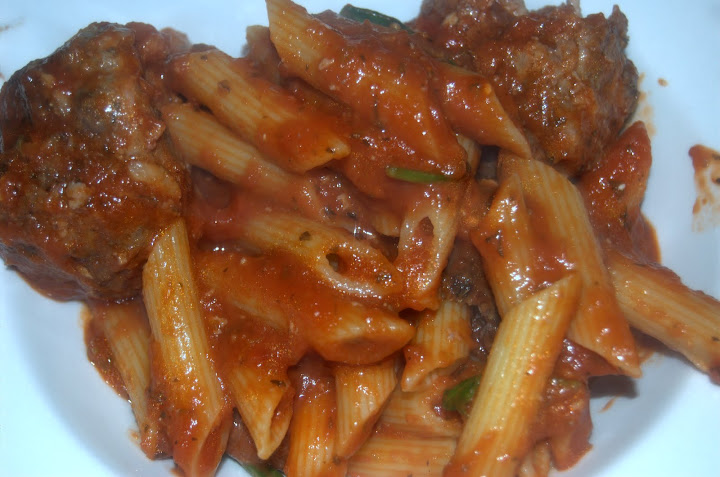 Put all ingredients in a large bowl and mix together with a fork until everything, especially the almonds, is fully incorporated.  Using a regular-sized ice cream scoop, scoop out portions of meatballs and lay on a cookie sheet that has been covered with tin foil and baking spray.

Bake in the oven for about 20-25 minutes or until just done.  Add to sauce to finish for another 2-3 minutes.