Ah, Michigan in the spring.  This week was day after day of 65 degree weather with full sun and, thanks to Daylight Savings Time, nice long lit evenings.  We grilled.  We lounged.  We ate out at cafe sidewalks.  We…did yardwork.  It was beautiful.  It was gorgeous.  It was—short lived.  Today’s forecast?  Rain and a high of 44.  Tomorrow?  Gulp.  Snow.  Sigh.

So even though I’m positively itching (that might be the bug bites from the yardwork) to hop on the grilling bandwagon and get my yippy-ki-yay on, I went back to my cold-weather friend, the slowcooker, and decided to try a new recipe…for goulash.

Am I the only person who, when they hear the word “goulash,” immediately thinks of Gargamel from the Smurfs?  No, you do it too?  Ok, good.  I’m not sure I’ve ever had a proper “goulash,” which is a stew usually made of beef, onions, vegetables, and paprika.  Interestingly, Wikipedia tells me that the word stems from the Hungarian word for cattle herdsmen.  Ha!  It’s like Hungarian Cowboy Stew.  Anyway, like I was saying, I’m not sure I’ve ever had a proper “goulash.”  After making this recipe, I’m sure I haven’t.  Not that it wasn’t quite tasty and rather easy to prepare, and not that it didn’t fill the house with a fragrant, spicy aroma, but I did add a couple of non-standard items for my own pleasure, like a dash of cinnamon and a bit of ancho chile powder.  I also didn’t do what Wikipedia says is a basic step to making goulash—but in my defense, the recipe didn’t call for it:

An important rule for all kinds of goulash, pörkölt and paprikás is to start by frying the onions in the fat until light gold (never darker), take the pan off the fire, immediately add the paprika powder to the hot mixture and stir well, then add the meat and stir again to coat the meat well with the onion-fat-paprika mixture before returning the pot to the fire. This ensures that the flavour of the paprika is released by contact with the hot fat, but that it does not burn or become bitter, which can easily happen if the pan is not taken off the fire first. 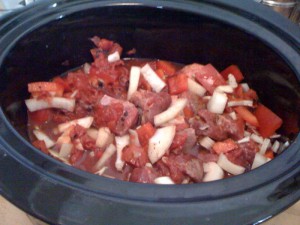 Another first for me in this recipe was the use of caraway seed.  Well, it wasn’t the first time I’ve used it, but it was the first time a recipe told me to.  Caraway seeds come from a plant that looks similar to a carrot plant and are native to Asia, Europe and northern Africa.  It seems innocuous until you grind it up or heat it and then it has a very fragrant anise-y scent.  It’s often used in rye bread or havarti cheese, so there’s a good chance you’ve tried it and just didn’t know.

And to finish out my “first” trifecta (altho, I guess really just a duo since my goulash isn’t an authentic goulash, per se), I opted for one clove of elephant garlic instead of the 3 regular cloves listed in the recipe.  Elephant garlic isn’t actually real garlic, and you can sort of tell that when you peel and slice the cloves.  It’s part of the leek family, but has a light, more-garlic-like flavor. 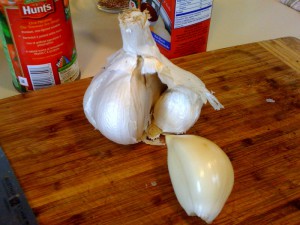 Anyway, while the picture for the recipe showed the goulash being served over wide egg noodles, I, in my cheapness and resistance to purchasing yet another item at the grocery store, decided to serve mine over jasmine rice that I cooked in beef broth (delish).  Josh enjoyed it thoroughly, as did I–it was tasty, warm, filling and would be extremely easy to scale up or down to accommodate your dinner guests.

serves 8
* 2 pounds beef stew meat, (such as chuck), trimmed and cubed
* 2 teaspoons caraway seeds
* 1 1/2-2 tablespoons sweet or hot paprika, (or a mixture of the two), preferably Hungarian (see Ingredient Note)
* 1/4 teaspoon salt
* Freshly ground pepper, to taste
* 1 large or 2 medium onions, chopped
* 1 small red bell pepper, chopped
* 1 14-ounce can diced tomatoes
* 1 14-ounce can reduced-sodium beef broth
* 1 teaspoon Worcestershire sauce
* 3 cloves garlic, minced
* 2 bay leaves
* 1 tablespoon cornstarch mixed with 2 tablespoons water
* 2 tablespoons chopped fresh parsley
1. Place beef in a 4-quart or larger slow cooker. Crush caraway seeds with the bottom of a saucepan. Transfer to a small bowl and stir in paprika, salt and pepper. Sprinkle the beef with the spice mixture and toss to coat well. Top with onion and bell pepper.
2. Combine tomatoes, broth, Worcestershire sauce and garlic in a medium saucepan; bring to a simmer. Pour over the beef and vegetables. Place bay leaves on top. Cover and cook until the beef is very tender, 4 to 4 1/2 hours on high or 7 to 7 1/2 hours on low.
3. Discard the bay leaves; skim or blot any visible fat from the surface of the stew. Add the cornstarch mixture to the stew and cook on high, stirring 2 or 3 times, until slightly thickened, 10 to 15 minutes. Serve sprinkled with parsley. 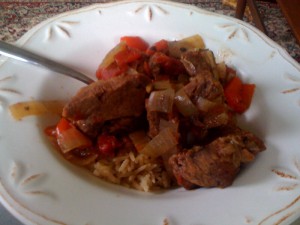