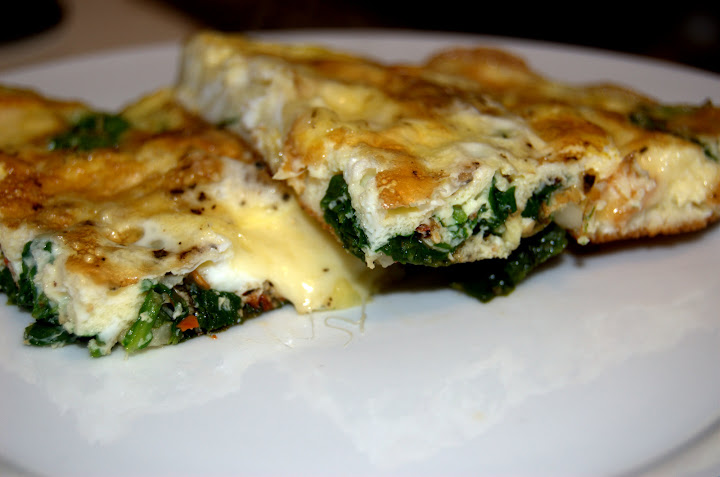 It was an odd weekend, really, this past weekend.  There was very little cooking and no baking.  Indeed, a pall of sadness hung over our apartment.  Poor Josh had to have all four wisdom teeth removed at once and…well, let’s just say, he’s seen better weekends.  And while I was reasonably healthy myself and not even a fraction as miserable as Josh, I tried not to cook too much because I felt sort of like a meanie making delicious food when he was subsisting on soft oatmeal and light Gatorade.

But today, as Josh slowly makes his way back to health and normalcy, I am slowly making my way back into the kitchen.  I baked a super easy cake recipe I found on AllRecipes.com, which yes, I did choose because it didn’t require butter and lazy girl that I am, I didn’t feel like trekking to the store to get more.  What’s even more shocking about that is the fact I was nearly out of butter to begin with.  But no matter!  I experimented and the cake looks good but as of the time of this writing, I have not tried it yet..

I then made a small dinner for myself.  And another bowl of oatmeal for Josh.  Pauvre, pauvre Josh.  That’s “poor, poor Josh” in French.  I could have just written “poor” but “pauvre” is way more fun to say.  Anyway, I wanted a simple dinner for just me but I didn’t want to go to the store, so I threw together what I had.

What did I have?  Well, first I had a small pork tenderloin defrosting in the refrigerator.  I had some eggs (well, I had one egg…and then Josh brought me some more after his follow-up dental appointment), and some arugula left from making pizzas with a friend, Paul, last week, and a block of Monterey Jack cheese.  Well.  That sounds like dinner.

First, I started with the pork tenderloin.  It was small, about 9 ounces, and well, there’s no recipe for what I did.  Did you know that you can make food without recipes?  It’s very liberating.  If you’re one of those people who worries about how you just can’t “throw things together,”  well stop.  I spend most of my culinary efforts on just randomly throwing things together.  I sprinkled the tenderloin with olive oil, salt, pepper and a healthy dose of herbs de Provence.  Then I placed it in my meatloaf pan (my meatloaf pan has one of those inserts with holes in it, so the grease drips out instead of sloshing around below the meat, marinating it with its fatty goodness, or badness, depending on how you feel about fat), turned the oven on to 400F and popped it in.  The high heat and the herbs create a nice crust on the outside which seals in the juicy goodness of the meat.  It’s fast, easy and you get a nice herby flavor that is easily punctuated by any sauce or side dish you want to add.

My side dish?  Was really more of a main course, with the meat being more like a side dish.  It was a simple frittata.  Here’s what you do:

Melt a tablespoon of butter in a small frying pan over medium low heat.  Add in one clove of garlic, chopped, and sauté for a couple of minutes. 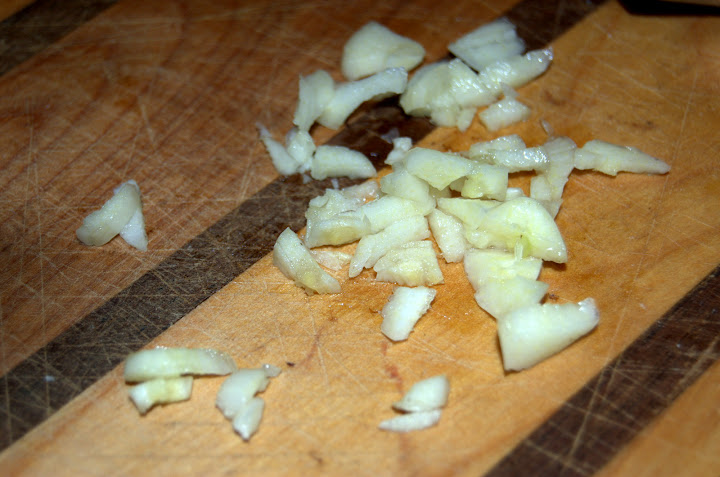 Add in a cup or so of fresh arugula and sauté with the garlic until soft and wilted.  Add a sprinkling of oregano and red pepper flakes (to your taste). 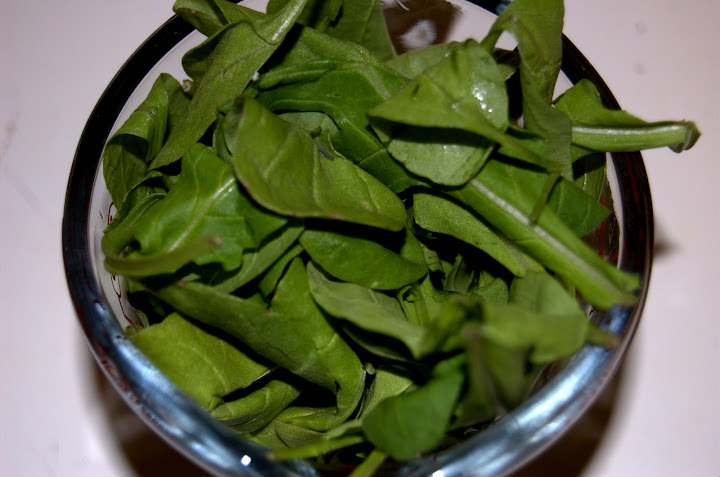 Whisk together two whole large eggs and two egg whites with two tablespoons of cream (or milk).  Pour egg batter into the pan.  Add a light sprinkling of salt and pepper. 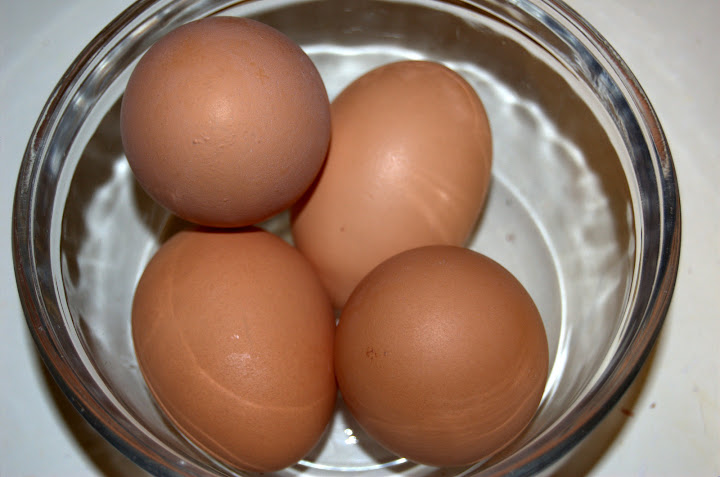 Chop one ounce of Monterey Jack Cheese into small cubes.  Sprinkle cheese on top of the egg mixture. 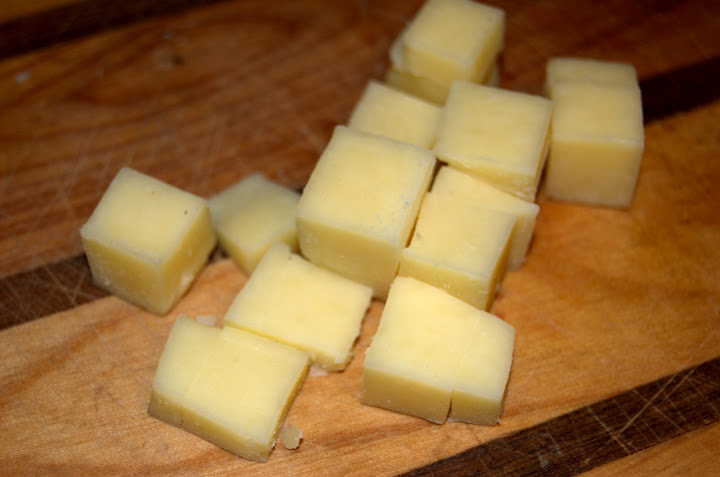 Let the eggs cook slowly on medium low heat for about 15 minutes or until just set.  Then place under the broiler for an extra 2-3, just to fluffy, fully set and browned. 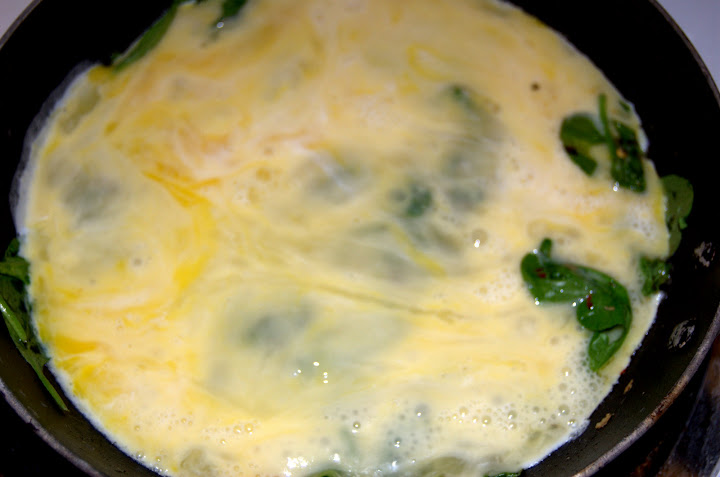 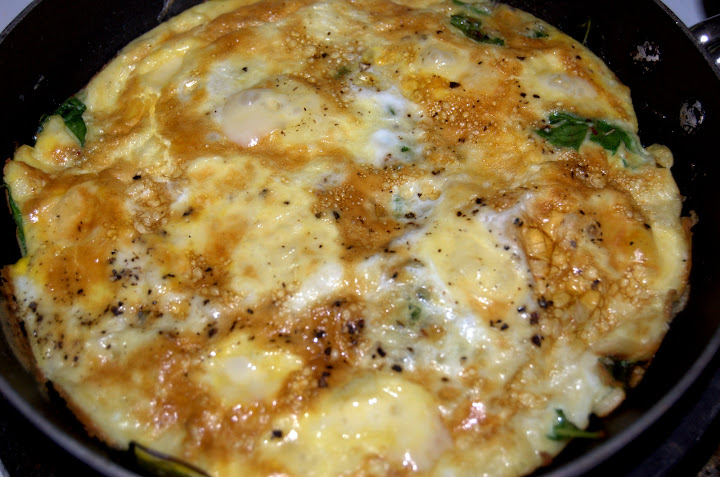 Scoop around the edges of the frittata with a flat spatula, gently lifting it from the pan.  Slide it out onto a cutting board or plate and cut into slices. 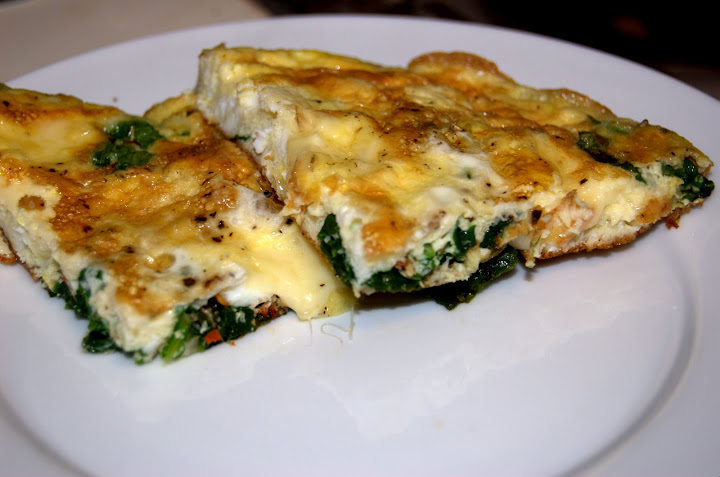 This is enough for one person, or can be shared by two as part of a tapas meal or with another dish.  The bottom and top get all nice and crusty and the inside is gooey and warm and delicious.  Don’t think you have to conform to arugula and Jack cheese either; the great thing about frittatas is that, like the flat omelets they are, you can any sort of ingredient and make something delicious.  All that goodness on the plate…and I didn’t even break a sweat.

2 thoughts on “A Simple Frittata….I had a lame joke for the title but decided to spare you…this time”