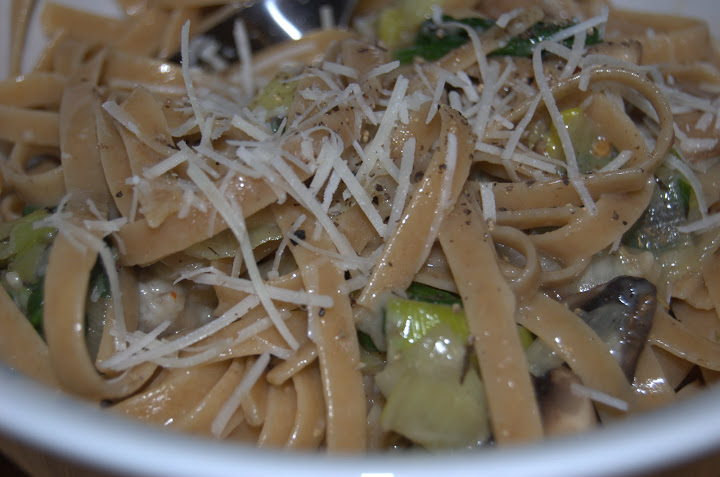 The first time I had a pasta carbonara was at a cooking class at Hollanders in Kerrytown.  I’ve long been interested in the whole “bacon and egg pasta” idea, but only in philosophy, because after all…I don’t eat breakfast.  I know, I know, just one more of my weird culinary idiosyncrasies.  Still, I wanted to try making carbonara on my own, particularly seeing how easy it was to do.  I wanted something a bit lighter and healthier tonight though (something about eating crushed lentil soup from Pita Kabob Grill makes me crave healthy things…at least until someone offers me something chocolate).  So I opted to throw together a healthier vegetarian version of the dish.

This is kind of a recipe-less recipe; the great thing about carbonara is that you can add in all sorts of things you happen to have on hand.  I had a giant leek in the fridge and figured that plus some mushrooms and spinach would make a good combination, and thanks to the whole wheat linguine I had in the cupboard, it would be pretty filling too.

So I started boiling the water for the pasta.  While it was working its way there, I heated up another skillet over medium high heat, chopped one pint of cremini mushrooms, 3 cloves garlic and chopped and washed the large leek.  Then once I tossed in the pasta (about 12 ounces–that’s 6 servings but most probably eat about 2 servings of pasta) into the (salted) water, I drizzled some basil-flavored olive oil into the skillet, along with a tablespoon of butter and then dropped in the veggies, a tablespoon of herbs de Provence, some salt and pepper and a tablespoon of red pepper flakes.  I cooked those down, stirring frequently, while the pasta cooked.  Add the spinach in the last two minutes or so of the cooking time. 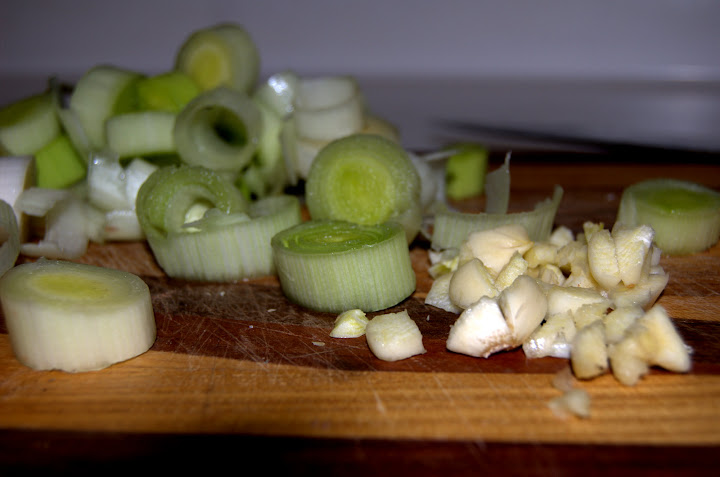 Then I broke two large eggs into a bowl and whisked them together with a tablespoon of cream (you can definitely substitute milk here–or go without), a half cup of pecorino romano cheese (parmesan is the standard) and a good helping of black pepper.

Drain the pasta, put it back in the pot and add the veggies.  Keep the pot off the heat (you’re all done with the stove at this point).  Pour in the egg mixture and mix everything in thoroughly.  Sprinkle with another handful of cheese.  Dish out.  Garnish.  Put fork to pasta.  Put pasta in mouth.  Mmm.  Repeat. 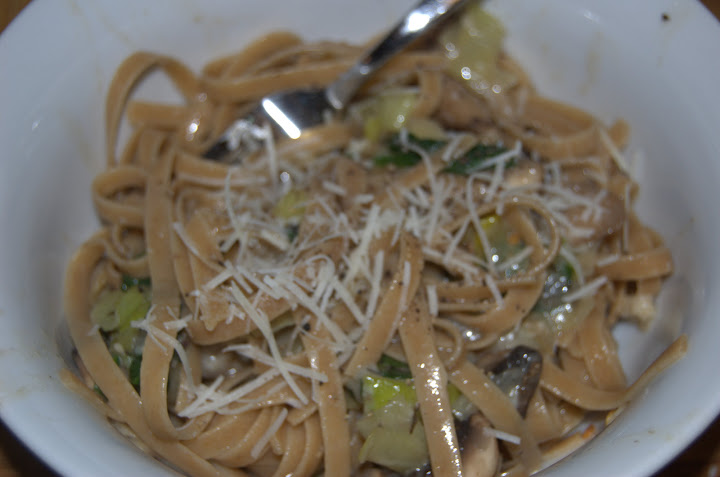 You have to admit–that’s ridiculously easy.  It’s fast, it’s tasty, it’s creamy without being terribly bad—sure, there’s cheese and egg, but that’s just delicious flavor and protein, coupled with some hearty vegetable servings.  Mom would be so proud.