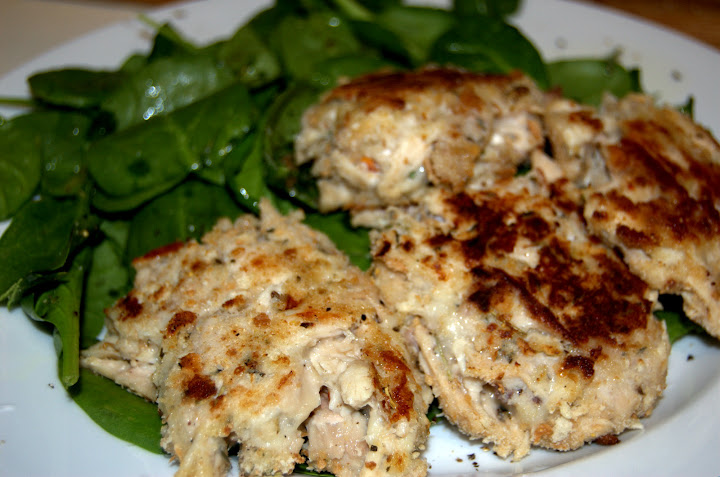 If you peruse food sites as much as I do, you’ve probably already seen hundreds of Thanksgiving recipes already.  Turkeys, side-dishes, pie after pie after pie.  Well I’m going to jump ahead a bit with recipe for Thanksgiving leftovers.

Leftovers?!? you say.  How can you possibly think about leftovers when I’ve yet to even set my deck on fire while frying my first bird?  Well, I’ve already had one Thanksgiving so far—yesterday, in fact, at my inlaws.  It was delicious.  And it gave me plenty of leftover turkey to take home to experiment with.

Now, there’s one thing I tend to want the day after a good holiday meal: something light.  I love rich food but it only loves me for so long before it brings out the claws (rawr).  So tonight when looking for a good light meal and considering the bag of turkey goodness I had in the fridge, I thought….turkey cakes.

As is well known, I don’t eat seafood.  I don’t eat anything that swims at all.  In fact, if a cow has so much as wandered across a stream, I don’t want anything to do with it.  I don’t know why, it’s just a thing I have.  But I am entranced by crab cakes.  I partially blame one of my old roommates, Steph, who was from Maryland; I think she was a bad influence.  But mostly it’s because crab cakes just look so freaking good.  And I’ve thought, I could easily do these and just replace them with chicken.  But I never got around to it because hey, there’s so many dishes and so little time.  But now I’ve got all this turkey…turkey’s kind of like chicken.  It’s like a bigger chicken.

Anyway long story short–I glanced at a few crabcake recipes for guidelines, got out my turkey, badabing, badaboom…turkey cakes.  Now if only I could think of a better name….

Combine turkey and all the ingredients that follow in a bowl, mixing well.  Divide mixture into 8 equal portions and form each portion into a patty about a half inch thick.  Put breadcrumbs in a shallow bowl; dredge patties in breadcrumbs until well covered.

Heat a couple tablespoons of olive oil in a large skillet, or on a griddle, over medium heat.  Add patties (if using a skillet, do half the batch at a time).  Let cook for about 3-4 minutes on one side before flipping over and cooking the other side another 3 minutes.  Don’t move the patties around the pan!  You want them to brown nicely and to set into a nice firm patty, so the less you move them the better.  Repeat procedure with the rest of the patties.  Makes 8 patties; usually you can serve 2-3 patties per person. 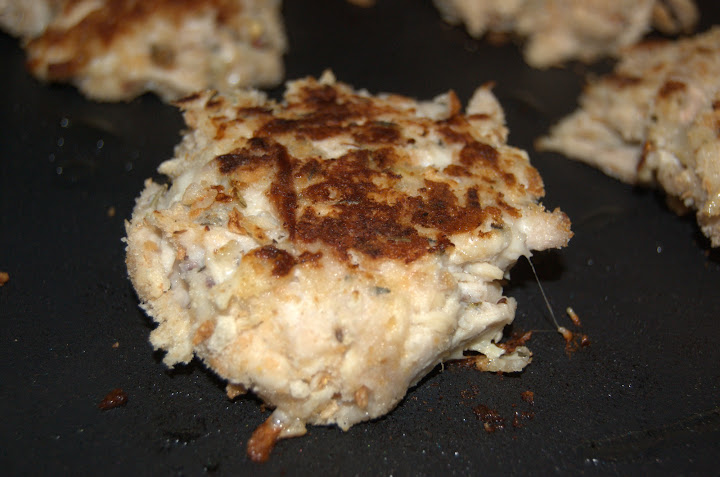 That’s all there is to it.  Simple, right?  Especially after all that work you had to do for the Big Event the day (or days) before.  And let’s face it–for some (crazy) people, turkey, especially leftovers, can get a little boring.  But no longer–now you can get a delicious crispy outside and a succulent turkey inside.  Serve it with some delicious leftovers or do what I did—just serve them on a simple bed of fresh baby spinach sprinkled with olive oil, lemon, salt and pepper.  This is a creative, refreshing way of doing leftovers—light, healthy and in convenient cake-like form. 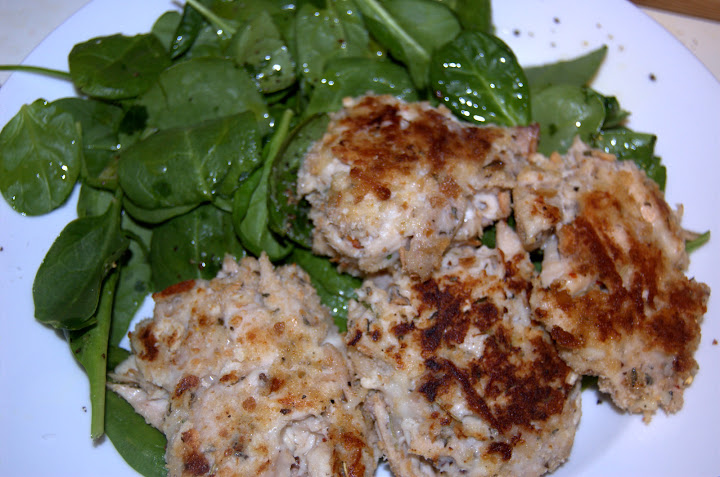 2 thoughts on “Turkey….cake….not as odd as it sounds”