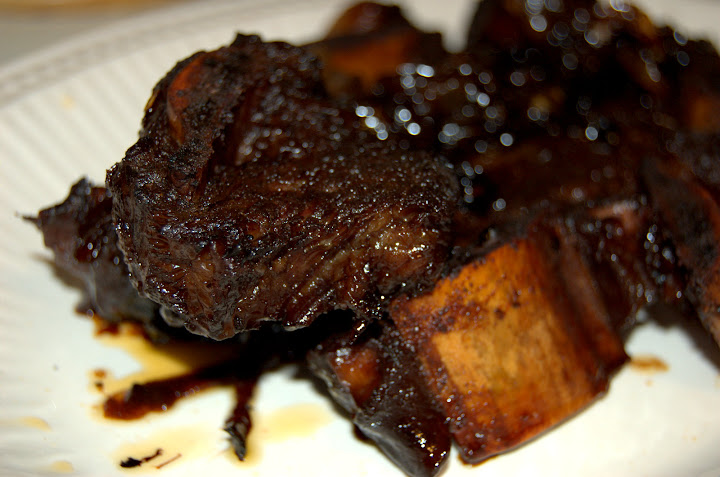 I got a notice that POM Wonderful was having a recipe contest and I thought, “Self, we’ve never entered a recipe contest before. We should give it a shot.”  Self said, “We’ll never win.”  And I replied, “Way to be defeatist, Self.  The point is that it’s an excuse to be creative.”  Self: “Since when do we need an excuse?”  Me: “Since you started screwing with my chi.”  Self: “Oh okay.”  So we shook on it.  Mentally.

So now that Self and I were in agreement (which happens much less often than you might imagine), I started thinking about various winter meals we could make with pomegranate.  I considered roasting a chicken basted with a pomegranate compound butter.  Iactually did that one, too.  It wasn’t bad.  But it didn’t make me go, “Mmmmmmmmmmmm” with my head tilted back and my mouth wide open slouched in a chair like Homer Simpson.  I also thought about stuffing a pork tenderloin with spinach and goat cheese and cooking it in a pomegranate glaze.  Haven’t done that yet…but probably will, because thinking about it now has me drooling a little bit, I’ll admit it.

But there was one other idea.  A not-so-common idea.  A slightly unusual idea.  An idea that makes you go “Hmmmmm…” and will hopefully make you go “Mmmmm.”  This idea was partially inspired by my love for roasted beef and partially by my love for the pairing of pomegranate and chocolate, which I discovered when I first made an ice cream sundae with pomegranate sauce and chocolate syrup, and partially by the natural affinity that chocolate and hot spices have for each other.  I thought, “Let’s coat some good short ribs with a dry rub of chili powder and cocoa and then braise it in pomegranate juice.”  That’s the ticket. 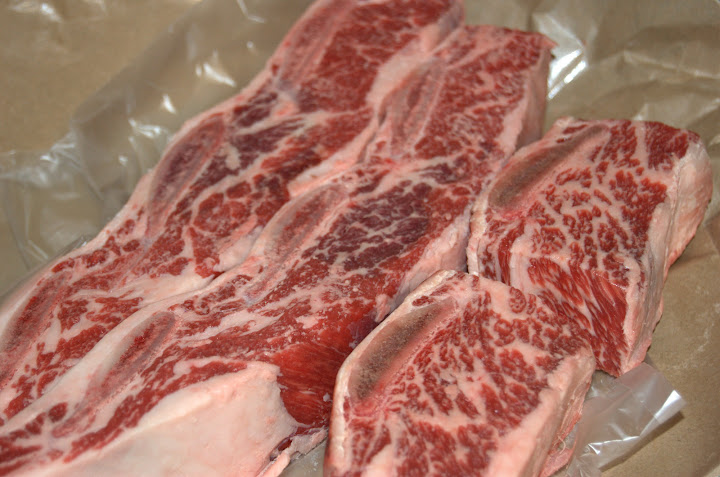 When I first told my husband about my plan, he very tactfully said, “That sounds…interesting.”  And of course he willingly volunteered to be a guinea pig.  Deep down, I think he doubted the tastiness of my theoretical concoction, which made it all the better when he got his first taste of it as it was cooking and said, “That is fantastic.  I don’t know what it is, but it’s fantastic.”

And indeed, they were fantastic, and gorgeous and falling off the bone and incredibly easy to make and delicious and oh my goodness, did I mention what happened to the onions?  They became like candy, almost black in color from absorbing that pomegranate juice and the whole dish took on this decadent savory-sweetness. 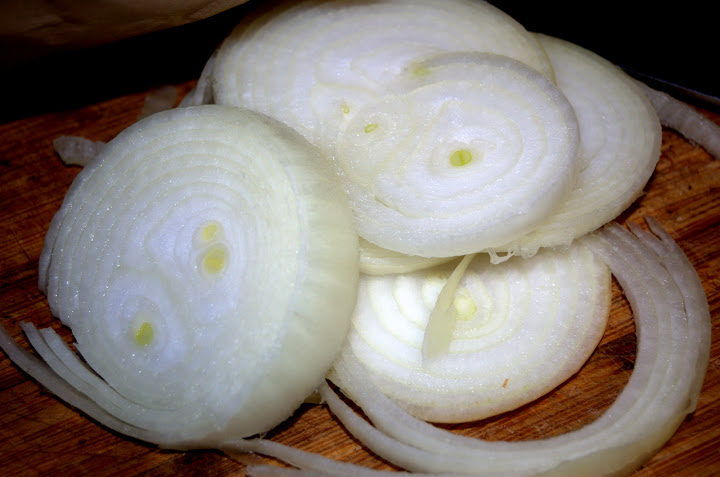 It worked out even more perfectly than I had anticipated.  I chose the ancho chile powder because it’s got a vast amount of smoky flavor (it’s a dried poblano pepper) but isn’t very hot.  It mixes well with cocoa powder.  If you’re worried about putting chocolate in your food, don’t.  It’s not as odd as it sounds—it’s fairly common in South America and many chili-devotees add a bit to their pots to deepen the flavor.  The meal doesn’t taste chocolately, it just gets these nice deep undertones.  On top of all of that, you have the sweetness and acidity of the pomegranate juice (not to mention all the antioxidants!) that break down and tenderize the meat and give it a gorgeous, dark, caramelized color and flavor.

It was so flavorful that for a side dish, I just threw together some steamed rice and broccoli because anything else would have been sensory overload.  In fact, so delicious was this dish that not only am I going to sit in satisfied smugness for the rest of the night, but I’m also already planning on doing it again for a dinner party sometime—it’s already top on my list of delicious, impressive, hands-off, no-fuss dishes.

Winter may just be my new favorite season.  Well, no.  Probably not.  However, this just may make it bearable.

Pomegranate-Braised Short Ribs with Ancho-Chocolate Rub
Note: I made enough in this recipe for 2 people, however, the dish is incredibly easy to scale.  When you’re purchasing short ribs, count on about 2 ribs per person and scale the recipe accordingly.

Mix the salt, pepper, herbs, ancho and cocoa powders in a small bowl.  Rub the ribs all over with the spice mix, thoroughly incorporating it into the meat.  Let sit for at least a half hour, or up to overnight.  Let the meat sit on the counter for about 20 minutes before cooking it, so that it comes up to room temperature. 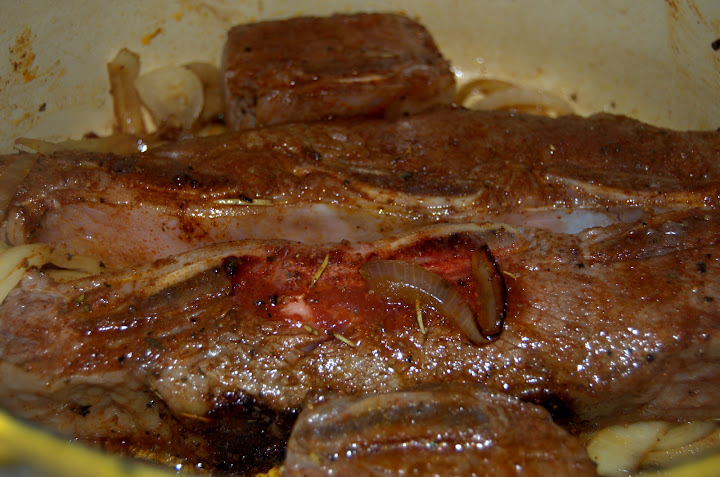 Preheat oven to 400F.  In a large, heavy cast iron pot or dutch oven, heat 2-3 tablespoons of olive oil over medium heat.  While that’s warming up, slice the onion into 1/2 inch rings.  Add the onion to the olive oil, cover and let cook for 2 minutes before flipping over and continuing to cook on the other side.  You want the onions to get translucent and flavorful, but not too cooked down or burned. 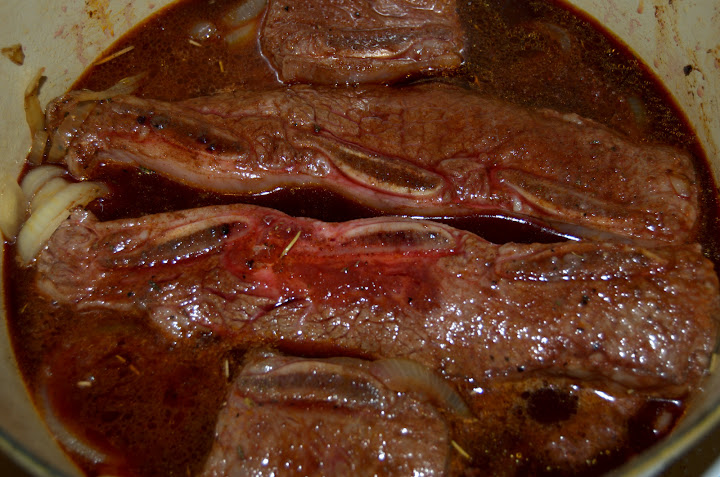 Move onions to the side of the pan and place short ribs into the pan meat-side down (you don’t want to sear the bone side of the rib).  Cover and let sear for 4-5 minutes or until well-browned.  Try not to move the meat around too much at this point, because you want it to maintain good contact with the pan.  Turn the meat over, nestling it well into the onions, and pour in the entire 16-oz bottle of pomegranate juice. 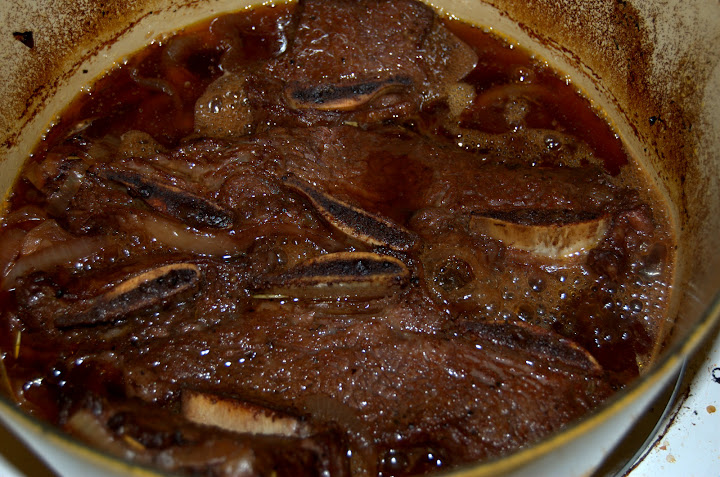 Cover and slide the pot into the oven.  Let the meat sit and braise in the juice for about 2 hours, or until the sauce has cooked down into a nice glaze and the meat is so tender that it’s falling off the bone.  Let it sit for about 10 minutes before serving. 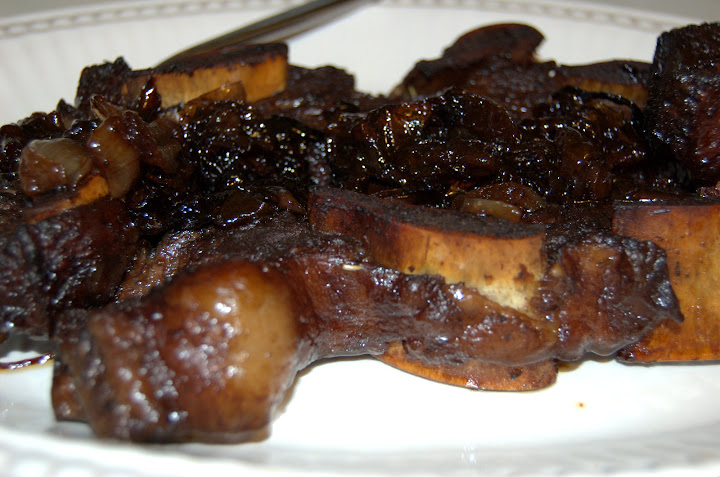 If you like this, vote for me in the POM Wonderful 2009 Fresh Recipe Contest.  Thanks!