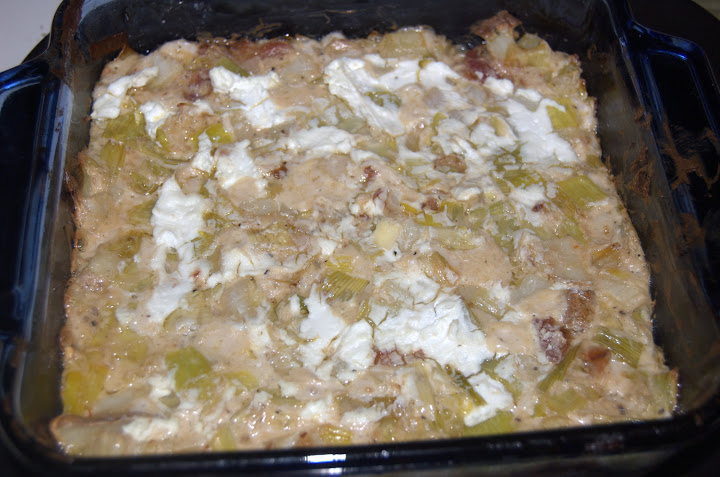 Tonight, I made gratin de poireaux and steak aux champignons.

First, I love the word “champignon.”  It is one of my all time favorite French words, along with “l’ananas,” “raplapla,” and “pamplemousse.”  A champignon is a mushroom.  The others are pineapple, wiped out, and grapefruit, respectively.  I mean, come on.  These words are fantastic.  And the only thing better than a great dinner is a great dinner with a kick-ass name.

Take “gratin de poireaux.”  It sounds so much fancier when you say it that way, rather than just “leek gratin.”  And it’s more fun to eat, too, especially when you’ve got a nice, French-inspired tablecloth down, some pinot grigio and a buttery croissant.  Oh and steak.  Cooked in cream.  Because we can.

For those of you who aren’t as taken with French things as I am (five years of French class in high school and college will do that to you), then just read the following words: bacon.  onions.  butter.  potatoes.  goat cheese.  steak.  mushrooms.  cream.  wine.

Now that I have your full attention, I will continue. 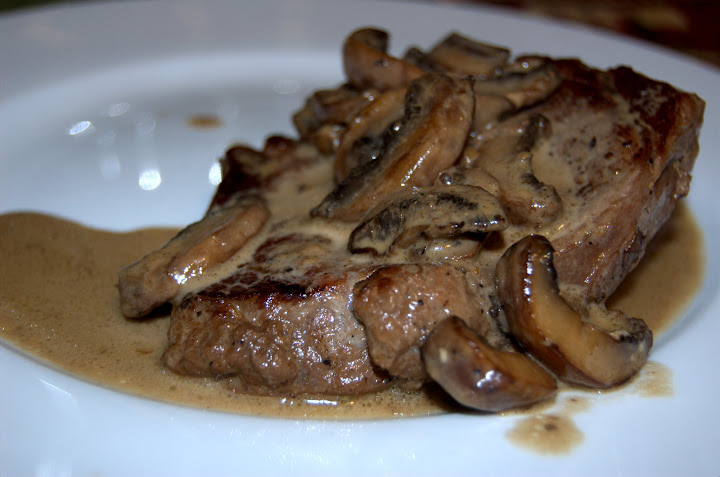 So our farm share this week was absolutely fantastique, if I may continue the trend. 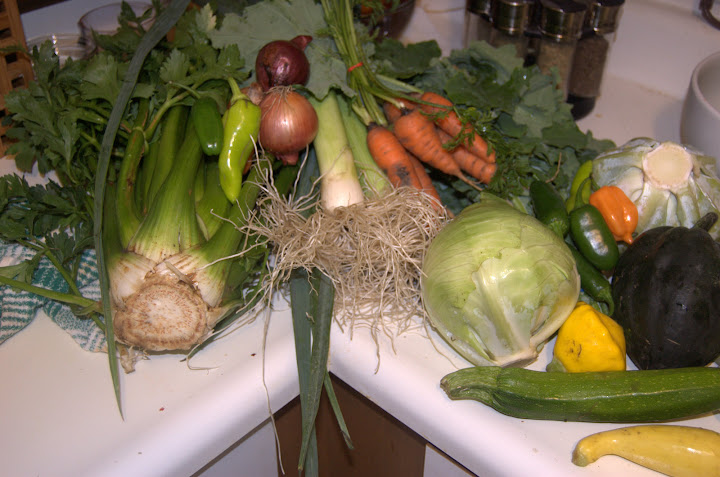 It had butternut squash, winter squashes, a giant head of celery and two giant, beautiful leeks.  I have to tell you: I’ve never had leeks before.  I doubt I’m alone in this, but people are often amazed when they know foodies who have never tried a certain food.  You have to keep in mind, I’m young, and the majority of my urban youth was spent….not eating leeks.  But experimentation is part of what a farm share is about.  So bring it on, I say.  Pourquois?  Pourquois pas? 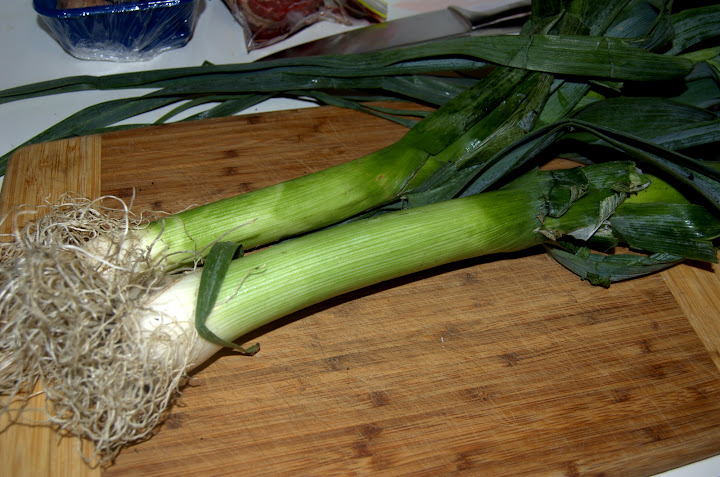 I have this cookbook,  Savoring France, which contains a collection of recipes and some information about mealtimes in France and it was in that wise book that I stumbled upon gratin de poireaux.  It looked simple enough and delicious.  This is the thing I love about general French cooking: it’s actually pretty easy.  I know everyone assumes you need to be Julia Child to do it, but you don’t.  Whether it’s this gratin or a pissaladière (onion confit pizza) or a mousse au chocolat, it’s actually pretty simple. And the recipe looked like a good one to try for our first taste of leeks.

So I planned to make the gratin today.  Actually, no, I planned to make it yesterday, but then I started making cheesecake and then I was too tired.  But today was the day.  I planned it all out about the time that I hit the grocery store after work: a whole French-themed dinner.  The gratin, and then a couple of small sirloin steaks we had thawed out, with a nice cream and mushroom sauce that I would figure out the details of as I went along…which is pretty much I do with all recipes.  After all, much like the Pirate Code, they’re just guidelines anyway.  So…on to the répas!

A word, if I may…or twenty: I’m going to list the basic recipe of the gratin here.  However I did deviate some.  My deviations will be chronicled below.

In a large frying pan over medium heat, melt 1 tbsp of butter with the olive oil.  When the butter foams, add the leeks and sauté until translucent, about 5 minutes.  Remove from heat and set aside. 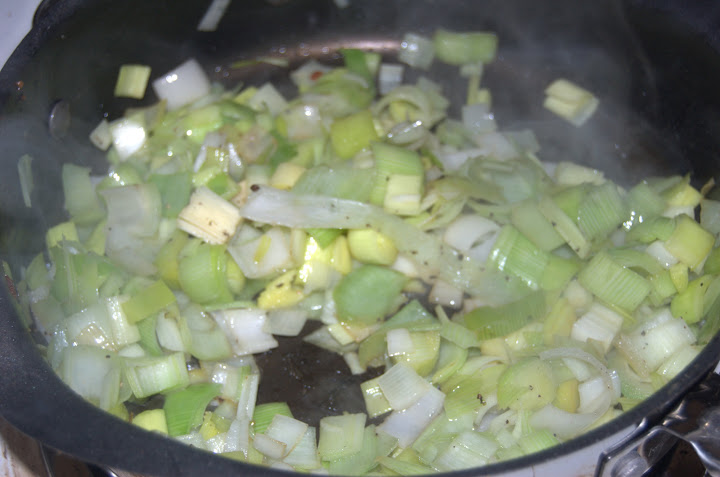 Preheat oven to 375F.  Grease a 1 qt baking dish with butter.
In a heavy saucepan over medium heat, melt 2 tbsp of butter and whisk in flour, salt, black pepper, and cayenne to form a paste. 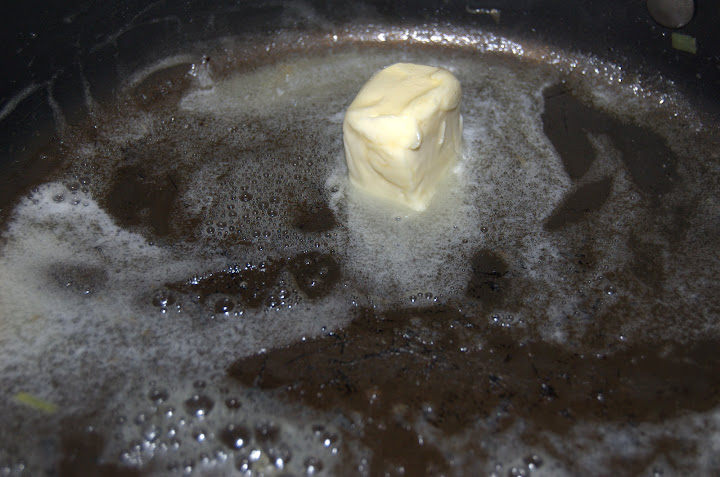 Return pan to medium heat and slowly whisk in the milk and stir until there are no lumps.  Simmer, stirring occasionally, until sauce thickens enough to coat the back of a spoon, 12-15 minutes.  Stir in goat cheese and cook 1-2 minutes. 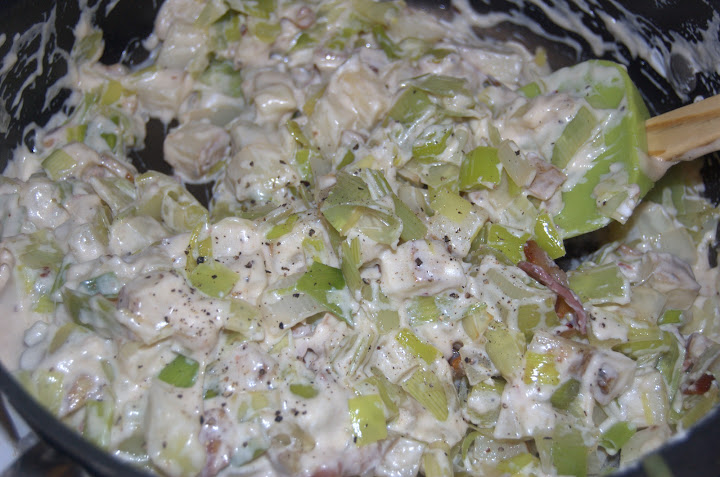 Spoon into baking dish.  Top with Cantal cheese.  Cut remaining butter into small dots and sprinkle on the surface. 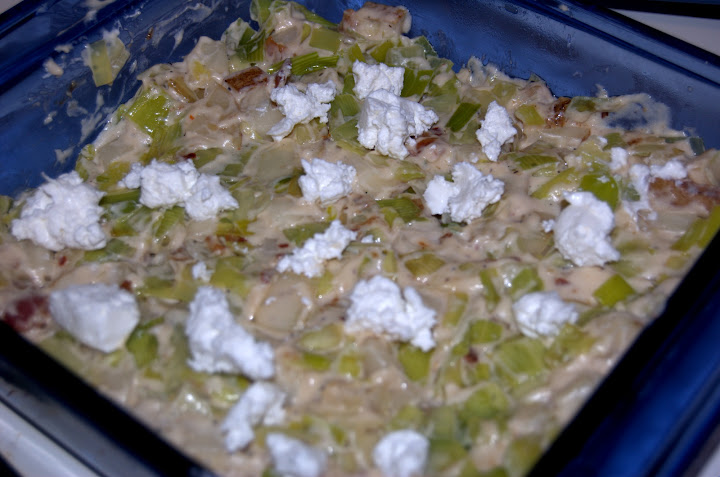 What I did:
First of all, I didn’t measure…anything.

Secondly, I substituted pancetta for proscuitto.  Pourquois? Because I figured it would be a bit chunkier, plus I could brown it first, giving myself a good amount of flavorful rendered fat in which to fry the leeks instead of using butter and olive oil.  (The difference between proscuitto and pancetta is basically the difference between ham and bacon.)  So in a large pan over medium heat, I fried about 2 ounces of chopped pancetta.  It smelled delicious, by the way.  Then I scooped out the pancetta bits with a slotted spoon and set them on paper towel to dry. 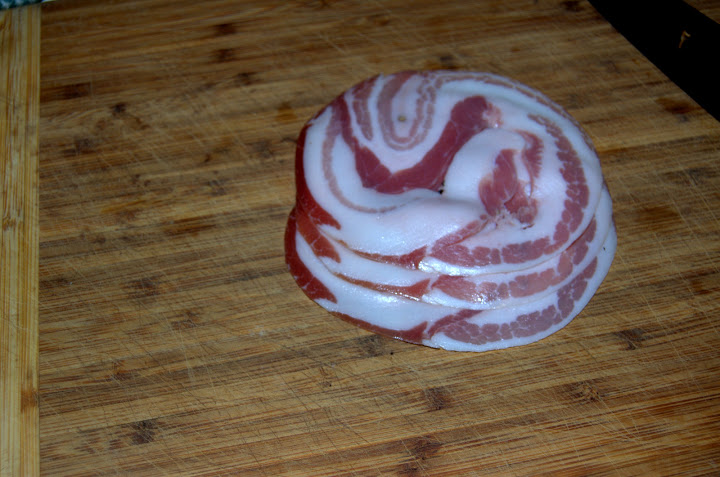 Third, I only used two leeks.  Two giant, giant leeks.  I washed and cleaned them and then diced them and added them straight into the pan with the hot pork fat from the pancetta and sautéed them until soft and translucent, with a bit of pepper added. 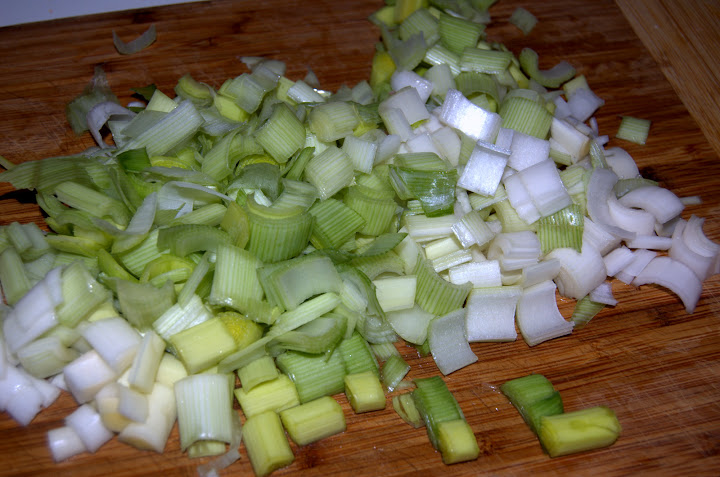 Fourth, I added a potato.  I had an extra russet left over.  It was lonely.  It needed love.  The kind of love that only bacon and onions fried in bacon fat can give.  It was a thought I had in the middle of cooking, and I’m glad I went with it.  While the leeks were softening, I diced the potato into small chunks and added it to the pan.  Toss everything around, and then I removed the veggies and piled them into the baking pan (this was great, because I only got two pans dirty the entire time; I used the skillet for both softening the veggies for the gratin and for cooking the steaks). 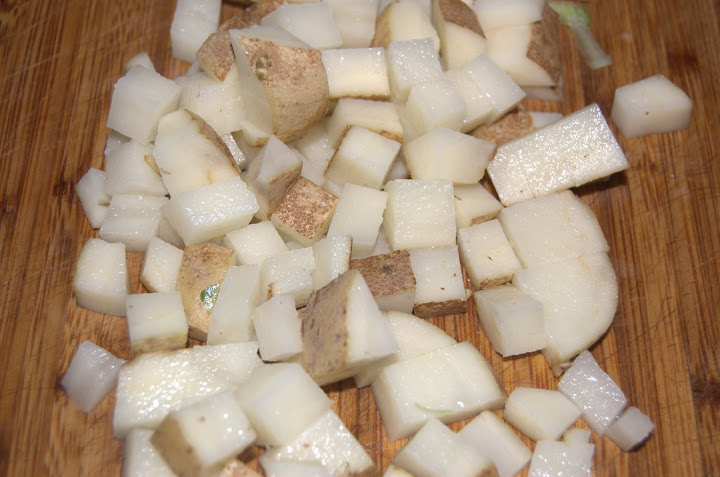 I used red pepper flake instead of cayenne.

I didn’t need to cook the sauce for 12 minutes on the stove; I let the butter brown a bit before adding in the flour and seasonings and it actually thickened really pretty fast.  I also didn’t measure.  In case I didn’t say that before.  Just kidding.  I know I said that before. 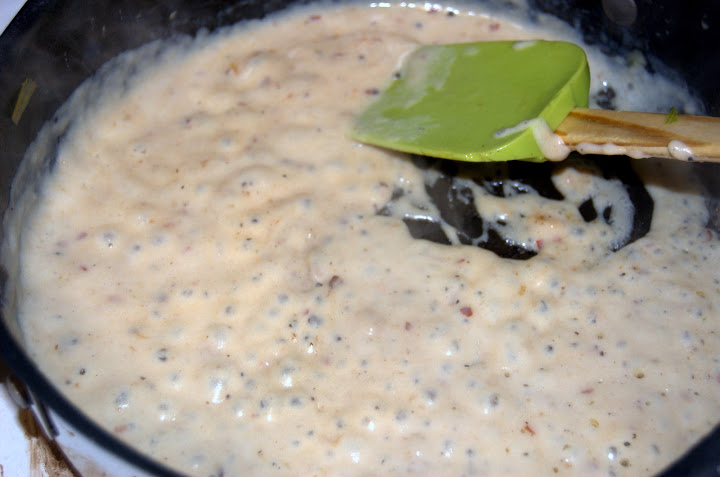 I didn’t use Cantal cheese.  I didn’t know what it was before this recipe.  I didn’t want to spend the extra money to buy more cheese.  So I topped it with the last bit of the goat cheese.  If I’d had parmesan, I would have used that.  I didn’t. 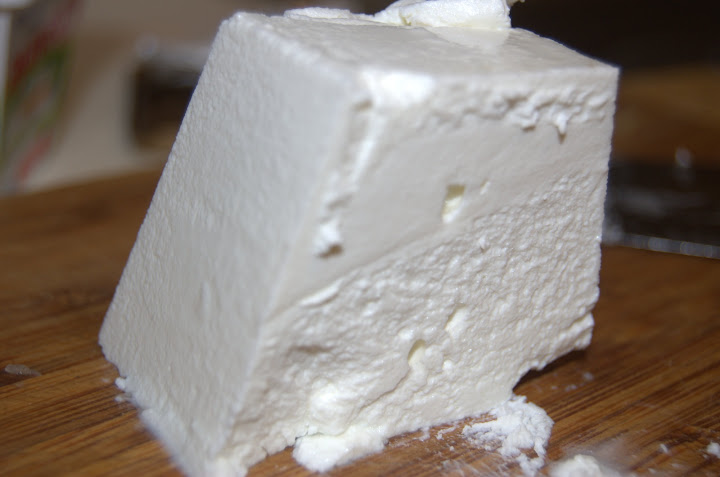 And it turned out great.  Honestly, Josh and I weren’t sure if we’d like leeks, which looking back is a bit silly because we love onions.  But you never know.  We did love this dish.  It was creamy and cheesy and filling.  The bits of potato were perfect in addition to everything else; I strongly suggest that change.  And Josh liked the bits of pancetta.  Good dish all around.  Easy to make, easy to modify, easy to eat.  Parfait.

Steak au Champignon
Don’t think of this as a recipe, because…it’s…not.

I cleaned out the frying pan from the leeks once the gratin went into the oven.  I put in a bit of olive oil and set it over medium high heat.

I sprinkled the sirloin steaks with a bit of salt and pepper on each side.  When the oil was hot, I added in the steaks and let them brown thoroughly on each side. 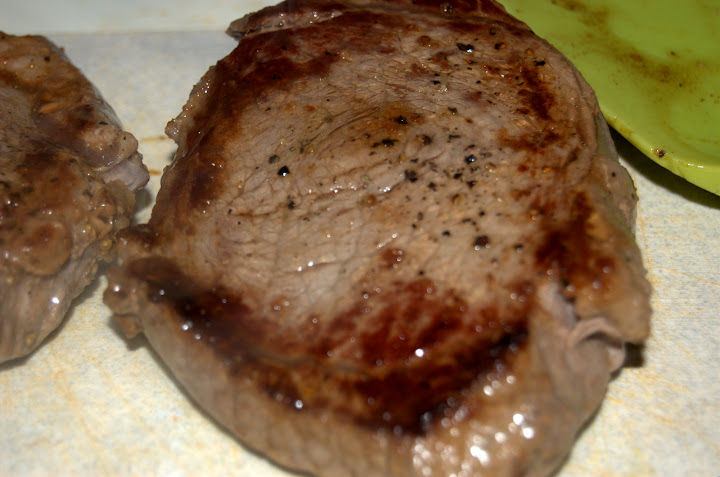 While they were cooking, I chopped up some baby portabella mushrooms, just as many as I thought looked good. 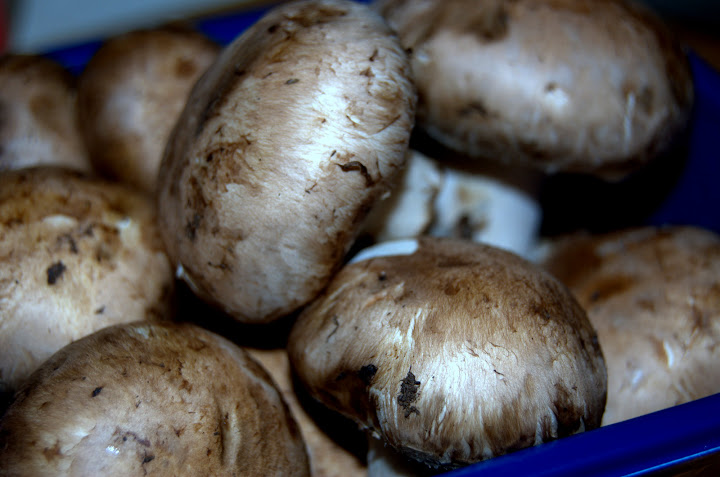 I removed the steaks from the pan and set them aside.  Into the pan went the mushrooms, a pat of butter, and a bit of olive oil, and the mushrooms sautéed until dark and soft.  I pulled the pan off the heat for a moment, turned the temperature down and added a half cup of cream to the pan, along with a couple sprigs of thyme.  Stir, mix well, add the steaks back in, cover and let it sit for the rest of the time the gratin was cooking; about 10-15 minutes. 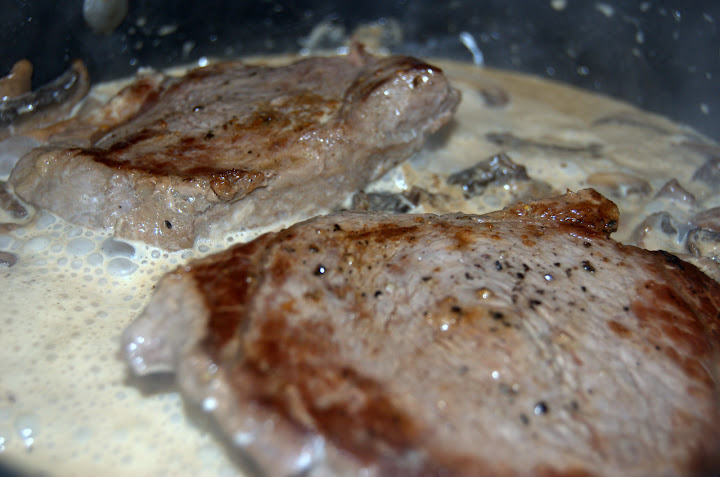 And then we had dinner.  Our bread side was a batch of fluffy fresh crescent rolls.  I had a glass of white wine.  Josh had…apple cider.  But it was all good.  C’était delicieux.  Would eat again.  Will blog for more. 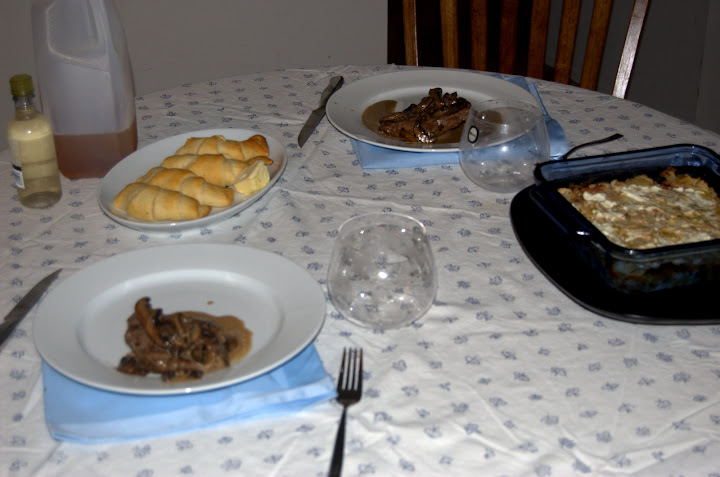