Josh and I had a late-ish dinner tonight and decided to go with something light and easy: grilled pizzas.  We were encouraged by our first efforts to try it again…because it’s delicious. 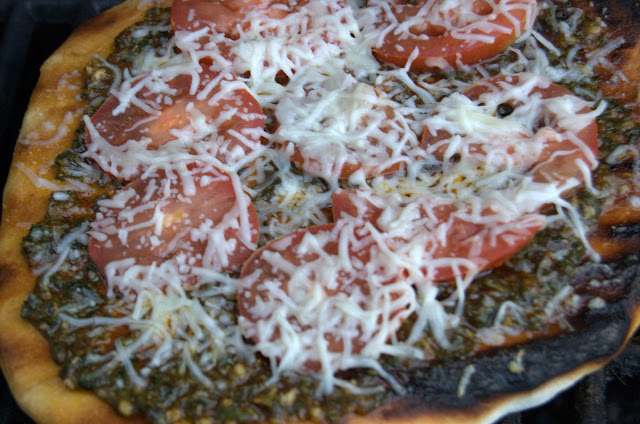 Going off a tip from Jodi (thanks Jodi!) about sprinkling garlic salt on the crust, I doctored ours up with a bit of the steak seasoning we’d gotten for our NY strip steaks on Friday.  We hadn’t liked it much for the steaks but I thought the garlicky-ness of it would go great with the bread.

Josh opted for his usual pepperoni and bell pepper pizza, while I felt like going light and vegetarian, topping my grilled crust with a bit of homemade pesto (the basil on my deck was getting out of hand and I had some walnuts to use up), some thinly sliced tomatoes and mozzarella cheese (and then, after it came off the grill for the last time, a good sprinkling of salad greens, some salt and pepper and a thin drizzle of olive oil).  For a simple side dish, some sliced watermelon with salt and pepper (sounds odd, I know, but quite tasty actually). 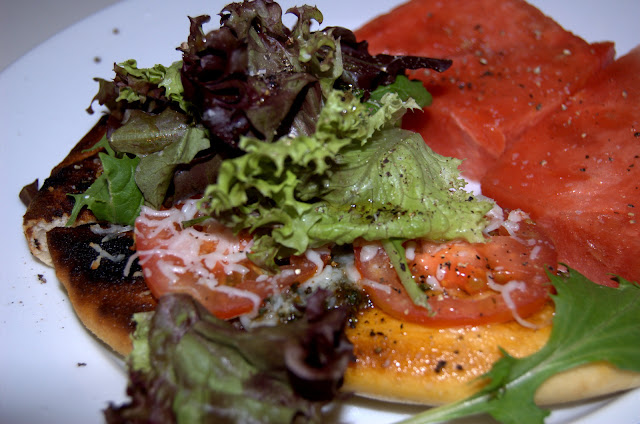