Tonight, it’s just me and the dog.  Josh is at a Computer Society meeting; he’ll be having dinner there.  So I get the rare opportunity to make dinner just for me.

Being that I’ve almost always had roommates, or ended up cooking for get togethers, I’m used to cooking for a lot of people.  When it got to be just Josh and me, I had to adjust a bit to cooking for only two, and occasionally on nights like this, I get to relearn how to cook for just one.

Well originally I thought I’d make myself a nice pesto pasta with chicken meatballs (cough), because after all, my basil plant needs cutting down and besides, it’s a rainy night and pasta is usually good for those.  But after lunch it occurred to me that really, I just wanted some pizza.  So I figured I’d make my own.

Now, while picking up our farm share at Morgan and York yesterday, we’d also picked up a loaf of unsliced bread.  We had about half left.  It was good, dense white bread and I figured, hey why not use that as my crust?  After all, I love french bread pizza; it’d be sort of like that.  On the way home we stopped at the store (which, frankly, we do about 5 days a week; we lead a very French style life that way) and I got a few toppings–some part-skim mozzarella cheese, some vine-ripened tomatoes, baby spinach and some good sliced pepperoni (I’m a pepperoni fanatic.  I’ll tell you, I go vegetarian a few times a year and generally for Lent as well and frankly, the hardest thing to give up for me is pepperoni).

So I started by cutting thick slices of bread from the loaf and toasting them in the oven.

While those were toasting, I heated a skillet over medium high heat and tossed in the pepperoni, letting the grease run out a bit.  I tossed in a half cup of diced red bell pepper (I had a couple left from the market this weekend), a quarter cup of sweet onion, a tablespoon of ancho chile powder, a tablespoon of dried rosemary, and salt and pepper and let that cook down.  During the last couple of minutes, I added in a couple cups of the baby spinach to wilt.

Time to assemble!
I wanted everything to stick to the bread and not slide off, so first I started with a slight sprinkle of cheese, and then I laid down my “sauce”—in this case, a fresh sauce of just very thinly sliced tomatoes.

Then a bit more cheese.  Then the spinach and pepperoni mixture–half on each, followed by—you guessed it–more cheese.

I popped it in the oven for another 10 minutes to bake and melt the cheese, sprinkled on a bit of  fresh chopped parsley and then voila!  Dinner was served. 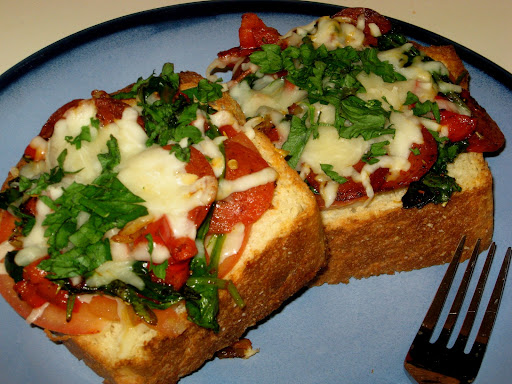 It was pretty delicious too, if I do say so myself.  And I do.  Well, I just did anyway.