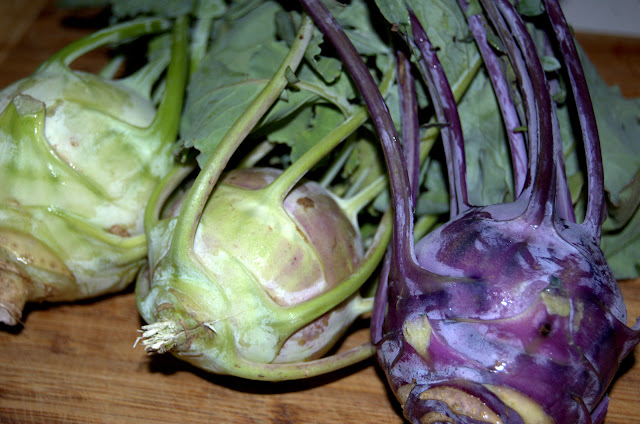 Kohlrabi is an interesting little plant that I’ve wanted to try before but never bothered to purchase.  It’s a small, hard cabbage with a texture similar to a cabbage heart but very faint in flavor.  We used it, the potatoes, 2 cloves from the bulb garlic and the cabbage from last week to make tonight’s dinner…

Josh was in the mood for steak tonight and I was ok with that; after all, a number of our farm share goodies would be great on the side.  We stopped by Whole Foods and talked with our friendly neighborhood butcher (seriously, he lives in our apartment complex) who we see pretty often (we do grocery shop almost every day) and looked over the meat selection.  We were big fans of the ribeyes we got last time, and they still looked pretty good, but to me the NY strips looked a bit fresher with better marbling, and we hadn’t tried cooking those yet, so that’s what we picked.  While wrapping the two steaks, the butcher gave us a tip on what he said was one of his favorite dry rubs and suggested we give it a try.  Now, normally, I’m not a fan of store bought rubs.  In fact, I’m still not.  I have a great stock of spices so I usually make my own, and besides, commercial rubs often contains lots of extra salt or even sugar, so you should be pretty careful about checking labels (otherwise you’re consuming unnecessary sodium and frankly, sugar burns and you have to be more careful when cooking with it).  But I’m not one to turn down a tip from a meat guy and I’ll try anything once, so we picked up a bottle for ourselves. 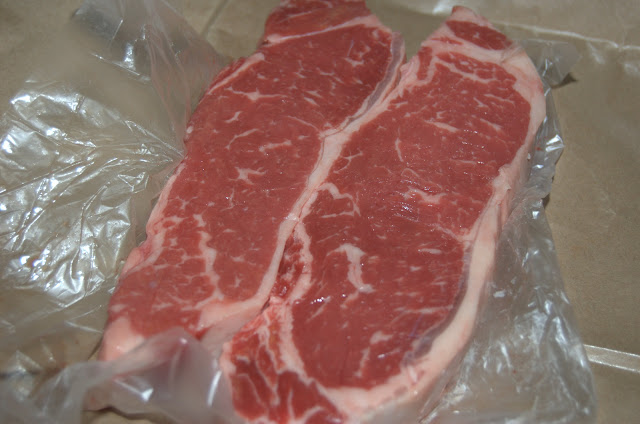 I set a pound of the redskin new potatoes to boil on the stove. When they were close to getting soft, I had Josh start up our grill (we have a gas grill, so it doesn’t take long, and yes, I’m well aware of the gas vs. charcoal debate and have many resolute opinions on it but that’s a post for another day) while I prepared the steaks with a bit of oil and the rub, which contained pepper, salt, cumin, coriander and garlic.  Once those were safely on the grill, I grabbed a handful of fresh basil and a half handful of fresh thyme for some homemade pesto, and pulled out the kohlrabi and the cabbage. 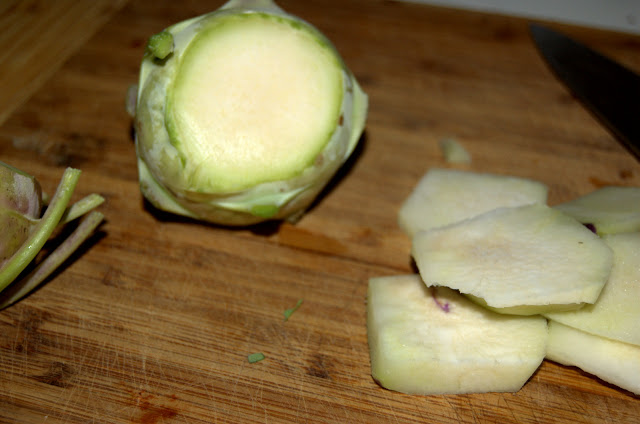 To make what could be a very long post shorter, the kohlrabi was chopped into strips along with a quarter of the head of cabbage and sautéed in a good tablespoon of peanut oil, along with a handful of chopped walnuts, a teaspoon of paprika and some salt and pepper. 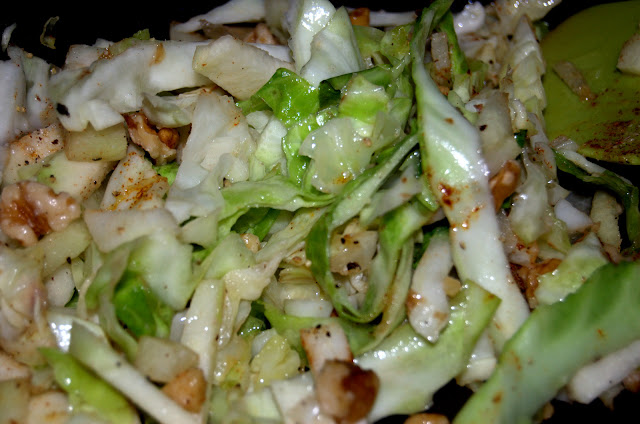 Once the steaks were pulled off the grill, I covered them with tin foil and let them sit and rest while I finished the potatoes: I drained them and tossed them into my mixing bowl with a handful of shredded mozzarella cheese, the pesto (which I made with the basil, thyme, walnuts, two cloves of garlic grated parm and more olive oil than I care to say), and a splash of milk, followed by a good sprinkle of salt and pepper.  The potatoes came out deliciously herby and smooth. 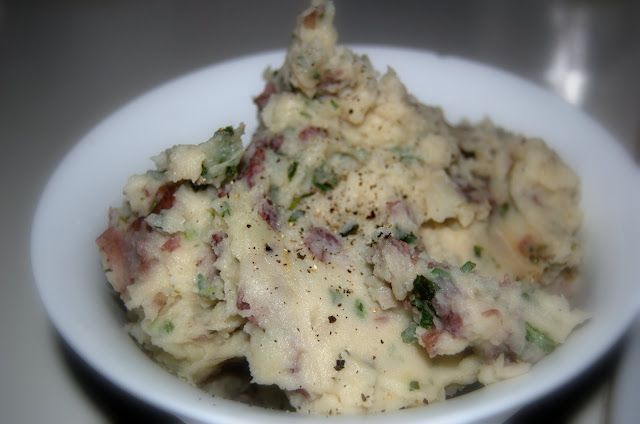 The cabbage stirfry I liked a lot, although Josh wasn’t as big a fan (he also doesn’t like cabbage in general).  The flavors are definitely strong but good—if you like cabbage, it’s worth trying.

As for the steaks, they were beautifully grilled and rare…but neither of us like the strips as well as the ribeyes, and we both agreed we prefer them sans-rub…the rub just had too much garlic for me; it was overpowering.  I prefer a simple salt and pepper approach to good steak.  It’s the meat you want to taste; not the inside of a garlic bulb. 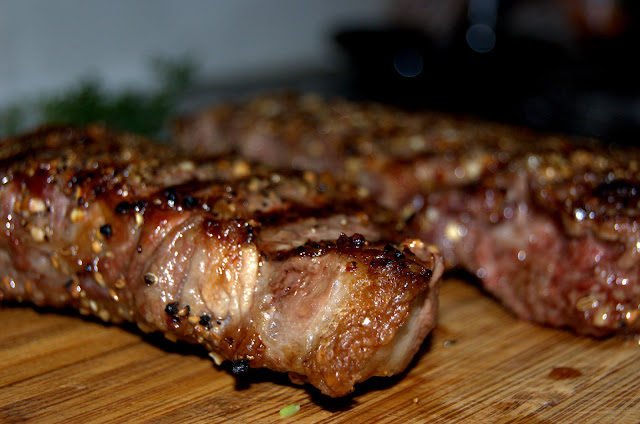