For dinner tonight, Josh and I decided we would go where no man has gone befo–no, wait, scratch that, we decided to go to Arbor Brewing Company in downtown Ann Arbor, where many a man has been before.  But not me.  I’ve heard good things about it, but it’s not usually on my radar of places to go.  I thought today would be a good time to check it out.

Having skipped lunch, we were having an early dinner (4:30ish) so we beat the Saturday evening crowd and since it was a lovely 81 degrees Fahrenheit, we decided to eat outside (“we” being “me” and “Josh grudgingly agreeing because he knows how much I love hot weather and how little of it I get in Michigan and besides, there was a breeze and thanks to the bevy of tall buildings on E Washington, we’d be in the shade anyway”).  The weather was lovely, the sidewalk seating was great, the staff was excellent and the menu was modest but delicious, which works out well for me because sometimes too many choices is a terrible thing.  Like the cereal aisle of a grocery store.  How can I possibly make up my mind?  More on that another time.

Anyway, what I’ve heard about ABC is that, of course, they also own the Corner Brewery in Ypsi, and that besides having delicious food, they’ve got an initiative going to avoid high fructose corn syrup, additives and hormones, choose organic, local food and make many items from scratch, such as their own tortillas, salsa, spicy black beans, charro beans, enchilada sauce, cilantro-lime rice, desserts and soups.

Speaking of delicious tortillas, salsa, spicy black beans, charro beans, enchilada sauce and cilantro-lime rice…that’s what I got for dinner! 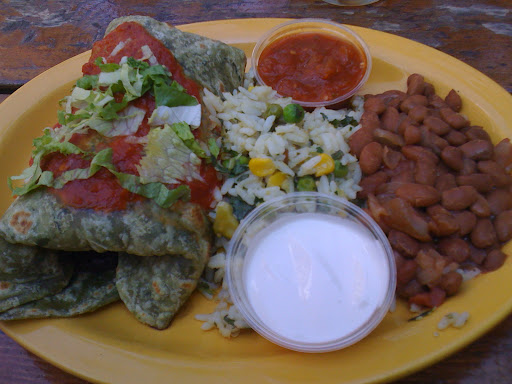 And it was great.  Many people rave about the Prickly Pear but I have to say that this meal easily rivaled anything I’ve gotten from there; all it was missing was the guacamole.  The tortilla was flavorful, the burrito filling (black beans, rice, corn, cheese, peppers) was delicious and spicy, the salsa was great, the charro beans on the side were fantastic; the rice on the side not great, needed additional flavors (like basic pepper and salt) but overall, the meal was a win.  Josh, a big burrito fan, enthusiastically agreed.

Josh had a burger–with onions and barbecue sauce of course–and a side of their special garlic fries, which the waiter told us was “spicy.”  They were definitely…garlicky.  A bit too soft for Josh’s liking though, but better with the organic ketchup. 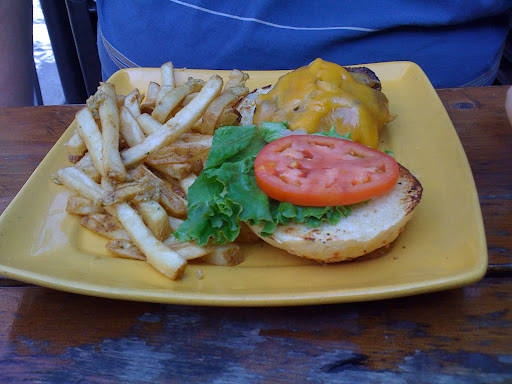 Don’t ask me anything about the beer–neither Josh nor I like the stuff.  But quite a few people seemed to come and go carrying jugs of it so there’s that :-).

I’m definitely looking forward to trying it again sometime.  Variety.  Spice.  Life.  You get it.
After that, Josh had the genius idea (he is so smart, that husband of mine) to go next door to Schakolad and get some of their gelato.  Did you know that Schakolad now makes their own gelato with their own delicious chocolate?  They do.  You heard it from me.  It was a bit pricey–$5 for a scoop–but that comes with two free chocolates of your choosing and the best part of gelato is that it’s so dense that you only need a little bit to feel full and satisfied.  That’s definitely the case with Schakolad’s offerings.  If you don’t know what gelato is, it’s basically Italian ice cream–only it’s denser and creamer because it more milk and egg yolks and less cream, fat and air.  It’s also churned slower and stored at a warmer temperature.

Josh and I shared a $5 cup of the triple chocolate–chocolate gelato with a chocolate glaze and large nutty chips of chocolate–and it was more than enough for both of us.  It was delectable.  Succulent.  Luscious.  Exquisite.  And other synonyms for yummy. 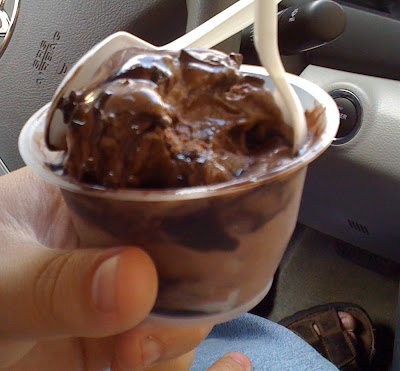 So what’s the deal with the “Shacko-lattes” in the headline, you may wonder?  Schakolad also does coffee drinks…a poster on the wall proclaimed that lattes were available…Schako-lattes.  Ha.  I love puns.

2 thoughts on “ABC and Schako-lattes”